You've subscribed to Red's Tavern! We will preorder your items within 24 hours of when they become available. When new books are released, we'll charge your default payment method for the lowest price available during the pre-order period.
Update your device or payment method, cancel individual pre-orders or your subscription at
Your Memberships & Subscriptions
There was an error. We were unable to process your subscription due to an error. Please refresh and try again. 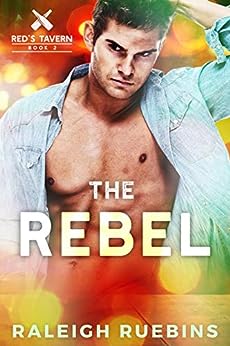 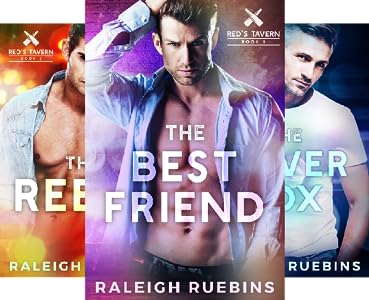 4.4 out of 5 stars
4.4 out of 5
117 global ratings
How are ratings calculated?
To calculate the overall star rating and percentage breakdown by star, we don’t use a simple average. Instead, our system considers things like how recent a review is and if the reviewer bought the item on Amazon. It also analyzes reviews to verify trustworthiness.
Top reviews

Kindle Customer
VINE VOICE
5.0 out of 5 stars I want to see the $10 dance!
Reviewed in the United States on June 23, 2020
Verified Purchase
I just finished both books in the Red's Tavern series. Best Friend and Rebel are so good! Raleigh Ruebins' books never disappoint, and you always get a happy ending. I'd really like to see that $10 dance! Just read the books, I really enjoyed them and can't wait for the next one to come out.
Read more
One person found this helpful
Helpful
Report abuse

Dichotomoose
5.0 out of 5 stars I hesitated reading this, but I’m sure glad I did
Reviewed in the United States on October 27, 2020
Verified Purchase
Second chance isn’t usually my cup of tea, but this was so well done. I felt a decent amount of angst at times, but no more than necessary. The story is crafted beautifully, and it’s definitely worth a reread.
Read more
One person found this helpful
Helpful
Report abuse

Terry@BismARk
5.0 out of 5 stars Really enjoyed it
Reviewed in the United States on April 19, 2021
Verified Purchase
Red and Liam's story is a wonderful story of redemption and forgiveness. They had so much past hurt to work through, and it was great to see them learn to love each other again.
Read more
Helpful
Report abuse

Sandra Kirchner
4.0 out of 5 stars A great second-chance romance
Reviewed in the United States on June 22, 2020
Although The Rebel is an adult film star book, it doesn't really fit a lot of those tropes. Red and Liam's relationship re-ignites against the backdrop of that industry, but it's the way they re-examine the old truths they both thought they knew about their relationship and how it ended that carries this story. The characters (in every sense of the word, lol) that inhabit Red's bar carry a lot of the humor but they feel like well-rounded people rather than just background noise. I especially enjoyed the way both Red and Liam have hobbies and interests separate from their relationship and their jobs that fit with their personalities. Although Liam's struggle with substances did play a role in their break-up and rears it's head again during the story, I only wish there had been a little more focus on how that affects Liam spread throughout the story.

Overall, the writing was smooth and engaging, and some of the dialogue is laugh-out-loud funny. As expected for a book with an adult film star character, the love scenes are hot, but they don't overwhelm the plot. A solid 4 stars.

Thanks to Gay Romance Reviews and the author for providing me with a free review copy of this book.
Read more
One person found this helpful
Helpful
Report abuse

Jen Valencia
4.0 out of 5 stars Better than the first book!
Reviewed in the United States on June 26, 2020
The Rebel is the second book in Raleigh Ruebins's Red's Tavern series, and this time around, we finally get Red's story! At almost forty, Lawrence Redford, better known as Red, has very little to complain about. He's got a bar that enjoys a loyal clientele, friends and employees who have his back, and a mother and brother who love and accept him the way he is. He has no regrets, but then Liam Hardy walked into his bar a decade after Red walked away from the younger man and everything they'd shared together. From aspiring adult film performer to one of the most recognizable guys in the industry, Liam's come a long way, and now, he's ready and eager to shift gears and start his own company. His trip to Kansas from Los Angeles may seem like wishful thinking since there are no guarantees Red would even agree to film a scene for him. Even if Red did agree, it doesn't mean he's forgiven Liam for what went down ten years ago. Red may consider trusting Liam with his body, but his heart? Well, that's a whole 'nother matter.

While the first book faltered for me, I quite enjoyed this second one. Yes, I did find it weird that Liam thought asking Red to be in the first video to be released by Liam's new adult film company was a good idea, but hey, it opened the door for some semblance of reconciliation between the exes. There was quite a bit of back and forth, as well as the usual lack of communication and assumption making that leads to more problems, but I still liked reading this, finishing the book in one go.. Red and Liam were main characters who were easy to like and I appreciated that there issues were not solved within a chapter or two. Then there were the supporting characters who provided some levity and added interest. We also get an idea of who's book in up next in the series, and I'm definitely excited to see how that will all play out. For now, I'm giving The Rebel four stars out of five stars.
Read more
One person found this helpful
Helpful
Report abuse

LG in Tx
2.0 out of 5 stars I was so waiting for Red's story but.....
Reviewed in the United States on June 21, 2020
I loved Evan and Mitch in book 1 and Red was my favorite character so I was waiting for his story, but what a let down. I felt absolutely no connection between these 2 MCs. The writing was stilted and the story was boring. The story line was unbelievable and at best the sex scenes just barely exciting. This was a slow burn second chance (and I do mean SLOOW). It seemed as though the author didn't have a plan as to how the story should go so he/she just threw a lot of words into a word processor. For the kind of interesting character he was in book 1 Red should have had an epic book. Needless to say, this fell way short of book 1. So disappointed.
Read more
2 people found this helpful
Helpful
Report abuse
See all reviews

Beatrice Bee
1.0 out of 5 stars Ugh
Reviewed in the United Kingdom on April 29, 2021
Verified Purchase
I’ve tried 3 books by this person now and they just don’t flow for me. I have never struggled to read a writer before. Sometimes I give up and that’s ok, but this time I struggled to find any enjoyment and didn’t even hate it. I just didn’t get any of it.
No passion, no angst, not anything really.
A waste of even a wasteful afternoon’s reading.
Read more
Report abuse
See all reviews