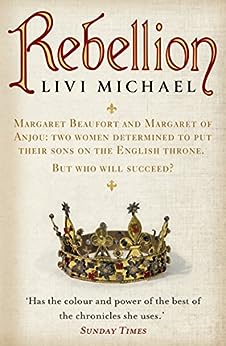 by Livi Michael (Author) Format: Kindle Edition
Book 2 of 3: War of the Roses
See all formats and editions
Sorry, there was a problem loading this page. Try again.

Margaret Beaufort and Margaret of Anjou - two women who will stop at nothing to place their sons on the English throne.

In exile in France with her young son Prince Edward, Margaret of Anjou at last gives up on promises of aid by King Louis and sets sail for England. There, she will return her husband Henry to the throne - and ensure young Edward will be its heir.

Meanwhile, Margaret Beaufort, separated from her son Henry of Richmond when he was an infant, sees the unrest surrounding the Lancastrian defeat as her chance to finally get him back. But the steps she takes to return her son imperil the kingdom and the throne's current occupant - King Edward IV.

With rebellions tearing the country apart, how far will each woman go to further the interests of their sons? And who can stand in their way?

Next 2 for you in this series See full series
Total Price: $22.48
Books In This Series (3 Books)
Complete Series
War of the Roses
Kindle Edition
Page 1 of 1Start OverPage 1 of 1
Previous page
Next page

Livi Michael is the author of Succession, as well as the children's book The Whispering Road.

Elaine Lee
5.0 out of 5 stars As advertised, shipping reasonable, came timely.
Reviewed in the United States 🇺🇸 on July 2, 2022
Verified Purchase
Duh, it’s a book. Didn’t use it for a doorstop.
Read more
Helpful
Report abuse

Elspeth G. Perkin
3.0 out of 5 stars "The world had changed, England had changed..."
Reviewed in the United States 🇺🇸 on August 16, 2015
Verified Purchase
Rebellion is the continuation of the story of the Wars of the Roses and spans from June 1462 to June 1471. Those familiar with its captivating prequel  Succession  will notice an all different kind of England with Rebellion unfortunately. Gone are the deliciously wicked characterizations from Succession, sharp witty dialogue and exciting events presented in rich tableaus that just beg to be read and indulged in. In this novel and for this eager reader, Rebellion reads as an empty hollow shell of history, so much potential and opportunities lost with too many inconsistencies to ignore. What shined brilliantly in the prequel in terms of the familiar and clever fashions of using oddments of chronicles, articles and recovered letter segments from the 15th century, becomes a disappointing muddled way to hurry the story along and doesn't add anything useful to the chapters this time. Also historic figures I have been anticipating to be reunited with and to see appear in the pages were presented flat and sadly underplayed.

I could have honestly stopped multiple times throughout Rebellion but I just had to see how the epic Battle of Tewkesbury would be depicted or one particular infamous mysterious death from history would be explained; sadly these became the final disappointing factors for me with only one short chapter dedicated to each. More chapters and passages were presented on King Edward IV's bowel habits and strong male infatuations with his counsel and Margaret of Anjou sleeping in a cave and starring at a lake than the ending of Rebellion. Overall, there were glimpses in certain chapters of the rich scenes I have come to love about this series, there is an obvious dedication to history in these works and I still plan to read any other books that come along. Rebellion is by no means a standalone novel, those who are unfamiliar with the events of the Wars of the Roses may become confused and frustrated without a solid entertaining foundation, so please start with  Succession  and maybe later, support your local library by picking up a copy of Rebellion.
Read more
3 people found this helpful
Helpful
Report abuse
See all reviews

Anna Pollard
5.0 out of 5 stars Exciting historical novel - welcome economy of words.
Reviewed in the United Kingdom 🇬🇧 on August 30, 2015
Verified Purchase
The War of the Roses in the 15th century was a truly turbulent period of history in England. This novel has been tightly written and superbly edited so that an authentic depiction of the political, military and social life of the times is made available to the reader. Just as in Succession - it's predecessor - the Chronicles which were written at the time are used to good effect. Not only do they inject authenticity, they also enable the novel to include a vast amount of action and maintain it's pace.
Furthermore, the characterisation is outstanding. Those readers who have already met Margaret of Anjou and Margaret Beaufort will immediately recognise their characters as they develop within the pages of this sequel. Also, as they will see Edward, the handsome idealistic youth, exercise the ultimate power of kingship and they will enabled to empathise with him as his emotional responses are deftly drawn.
Livi Michael has needed to include a huge cast of characters as the political struggles unfold - but she has not failed to represent lowlier members of society. All are there, right down to the common foot soldier. She is first and foremost a storyteller - but of no ordinary calibre. It is obvious that she has researched extensively before embarking on this trilogy. Her quest for truthful representation of the period shines through.
This is a highly enjoyable and informative novel. I really hope you enjoy it as much as I did.
Read more
Report abuse

LunaMay
5.0 out of 5 stars Historical gem
Reviewed in the United Kingdom 🇬🇧 on April 25, 2016
Verified Purchase
Historical gem! I love Livi Michael's writing, gritty with a unique voice and style she really brings this historical world to life for me. I cannot wait for her next novel.
Read more
Report abuse
See all reviews
Report an issue
Does this item contain inappropriate content?
Report
Do you believe that this item violates a copyright?
Report
Does this item contain quality or formatting issues?
Report