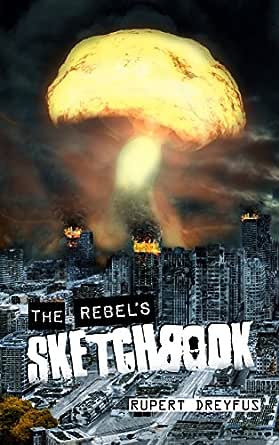 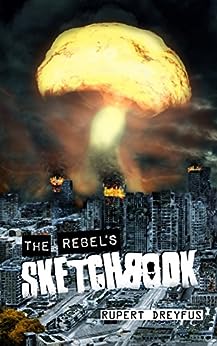 Mike Robbins
5.0 out of 5 stars Laughter and vomit
Reviewed in the United States on November 7, 2015
Verified Purchase
Few books can make you laugh and vomit at the same time. At least two stories in Rupert Dreyfus’s short-story collection The Rebel’s Sketchbook do this. It’s quite an achievement. In fact I am sure most major publishers would run screaming from this book, which is a good reason to read it.

Rupert Dreyfus does satire. Not the rapier-wit sort of satire; more a sort of blunt-force trauma. To read his stories is a bit like being beaten over the head with a cricket bat, but you laugh anyway. Thus in one of these stories, Eat Nasty, rival YouTube bloggers compete to see who can eat the most disgusting crap on-screen – and wind up eating themselves. Other stories also deal with social media and the virtual world. In Hatchet Job, a fanatical gamer runs out of money but is sure he can get work as a hit-man, because he’s so good at it in the game of that name. In Hotel Scum, a bunch of punks are about to be evicted from their run-down slum, but hack into the landlord’s PC and find he has an unusual fetish. (I won’t reveal what it is, but apparently it’s not unknown.)

As in any collection, some stories work better than others. Dead Man’s Blunt is told from the point of view of a marijuana cigar; it’s inventive and sometimes very funny, but in the end it didn’t quite work for me. The story Dreyfus offers as a postscript, Ice Age Coming, was a little too direct. When he is good, though, Dreyfus really is good. The story that had me throwing up and laughing at the same time, Martha, is completely revolting and very, very funny. Outrage, in which upstanding citizens turn into zombies and attack people on benefits, is a blunt but apposite comment on where we’re going in our treatment of the poor.

Outrage is a clue as to what’s driving Dreyfus. In an afterword to The Rebel’s Sketchbook, he says: “There is nothing admirable about being obedient to a system that doesn’t serve you. The present system we endure day in, day out is designed to turn us against each other while a minority of people get rich off our backs, destroying the planet in the process. ... Many people accept that this is the natural order of all things and they call it democracy.” These sound like pretty modern thoughts. In fact, I think Dreyfus is part of an English tradition of bawdy dissent and the bellowed curse that stretches back through Gillray, Hogarth, John Wilkes and back into the stews of Elizabethan London. It’s never gone away, but the rise of Facebook and Twitter, and the digital revolution in publishing, has seen it come back to the fore with a vengeance. The Rebel’s Sketchbook is part of this, as is Dreyfus’s other book so far, a witty and fast-moving novel called Spark.

I really look forward to seeing what Dreyfus does next. In the end, he may need to expand into new directions; the trouble with the bellowed curse is that you get a sore throat in the end. There’s mileage in it yet, though. The Rebel’s Sketchbook works. It might not be subtle, but these stories are a shrewd, funny and provocative take on modern life. Now let me get that vomit cleaned up.
Read more
One person found this helpful
Helpful
Comment Report abuse

Isis Sousa
5.0 out of 5 stars Great read for non-comformists... and those who think!
Reviewed in the United States on August 16, 2016
Verified Purchase
*Bought this book through my husband's account!* A While ago, I saw some friends here on GoodReads adding this book to their lists and both the title and cover got my attention. That city with the fire and explosions? Totally cool! “The Rebel’s Sketchbook” – Rebel? Resonated with me. Sketchbook? Totally me! I’m an artist and it looked like Dreyfus was one too! Or… Was he?
Then, I went for the synopsis and understood this was no art book… And I didn’t get disappointed, just all the more curious. I bought the book and dived into the short stories and… I loved them! I was indeed very surprised that many of the descriptions and thoughts of the characters sounded like thoughts of my own!
When you read such works, you may scratch your head and think that they are absurd. Why would characters do what they do and why is the world so satirically heightened? But then, you think further for one second and acknowledge: hell yeah, this is an ACCURATE and LITERAL description of humanity and the world WE live in. Rupert’s criticism is so ridiculously realistic, written in a fun way that makes us laugh at our own miserable condition.
I give kudos to him for writing so openly and honestly, giving the reader the transparency that is long gone from the literary world, now so controlled by publishing houses of the authors’ own fear of speaking their hearts to a dogmatic society. It was liberating and nonetheless, greatly entertaining.
I conclude that yes, Rupert is an artist – of the words and free thinking, whose opinion in form of fiction (or not!) show us the true picture of how things and humanity are today.
Read more
Helpful
Comment Report abuse

janiec
4.0 out of 5 stars Pay attention
Reviewed in the United States on July 2, 2016
Verified Purchase
With this collection of short stories, Rupert Dreyfus confirms what I already believe. The world is in trouble, and if we don't wise up, our only living survivors may prove to be a starving man and an emaciated polar bear. If this sounds farfetched, I recomend that you read these stories. Let them be your guide to the foundation of our culture: the ordinary people who are struggling to make ends meet. Pacified with idiocracy such as social media and outer appearances, our society appears as outlandish as some of the situations presented in these provocative stories. Subject to examination are the Deep Web, video game addiction, a president's very private bunker, competitive eating, male escorts and ... yes! ...a penis sprouting from a prime minister's head! Sure it sounds unbelievable, but consider the possible last living members of our earthly population. If we get too comfortable being followers, this may very well be our future.
Read more
Helpful
Comment Report abuse
See all reviews

sue jones
5.0 out of 5 stars What a fantastic and skillfully written book!
Reviewed in the United Kingdom on August 10, 2016
Verified Purchase
I've just finished this brilliant book. "The Rebel's Sketchbook" is a series of short stories that highlight Rupert Dreyfus is absolutely the best contemporary anarchist, satire and dark comedy writer I've come across (and I read a lot of books). Dreyfus makes complex social, cultural and political issues very accessible and spotlights, with deft, skillful and welcomed use of dark humour, the absurdities and horrors of the dominant neoliberal justification narrative and the ever-reductive, often untenable sociocultural situations that neoliberalism extends to us all.

To make the everyday experiences, catch 22 situations, Kafkaesque nightmares, tragedies and politico-cultural mediocrity being inflicted on us by the establishment such a revealing, bearable, entertaining and engaging read requires a hell of a lot of skill and talent. Dreyfus has both, along with a refreshingly vital authenticity and common sense, in abundance.

Dreyfus is most definitely an essential *must read*, not just for established rebels everywhere, but for anyone and everyone interested in our society and in navigating with a spotlight of common sense and rationality through our increasingly drab, homogenised, superficial, x-factor standardised, trivial neoliberally packaged contemporary cultural life more generally.
Read more
Report abuse

Benignus
4.0 out of 5 stars Humorous and thought-provoking
Reviewed in the United Kingdom on February 26, 2016
Verified Purchase
The Rebel’s Sketchbook is a collection of 13 first person satirical short stories. Subjects encompass capitalism, class war, drugs, viral culture, boy bands and zero hour contracts. The compilation’s motif is rebellion. Outrage is a tale about citizens turning into zombies and attacking people on benefits. There is also the surreal and aptly named Dead Man’s Blunt. Another features a community of anarchist punks. The book’s colourful cast includes Palahniuk-esque creation Eat Nasty, the proprietor of a popular YouTube channel. Amongst the visceral and erudite descriptions is the comparing of social media consumption to sucking vomit through a straw, gagging and wincing, but continuing to do so.

These stories are not for the faint-hearted. The dark humour, cynical observations and scathing social commentary appealed to this reader, an ardent devotee of transgressive fiction. Though not all will share the socialist sentiments of the author, they will find it difficult to ignore the ominous warnings regarding capitalism and the vapid nature of consumerist society.
Read more
Report abuse

Max J Freeman
5.0 out of 5 stars the vulgarity of click-bait youtubers in "Eat nasty" to my favourite, the stand-out piece of the book
Reviewed in the United Kingdom on September 26, 2015
Verified Purchase
Here is an author who needs to be read. Here, away from the big publishing houses, is a truly independent writer. Capable of writing in the first person, with a multitude of voices, (as any writer will tell you, this is no mean feat), Dreyfus spins 13 tales of modernity, each one unique, but each one leaving you with a feeling of unease, at the way society is progressing.

From the obsession with celebrity dealt with in "fingered", the desensitisation of violent computer gaming in "Hatchet job", the vulgarity of click-bait youtubers in "Eat nasty" to my favourite, the stand-out piece of the book, "Outrage", which for any who love the walking dead, and hate the DailyMail in equal measures, will create shudders in equal measure.

I look forward to reading "Spark" shortly, which I have also purchased, and if it is half as good, it will receive a 5 star, as has this piece. Good job Rupert. Keep it up.
Read more
Report abuse

Me
5.0 out of 5 stars ....
Reviewed in the United Kingdom on September 2, 2016
Verified Purchase
Excellent. If you want a book that makes the way you look at things stand on its head (or confirms what you already suspect, depending where you stand!) this is for you. Short stories so easy to dip in and out of inbetween tweets and selfies ;)
Read more
Report abuse

Amazon Customer
5.0 out of 5 stars TRS is a must read for fair-minded Britons! Read & cheer, or Bleed & sneer
Reviewed in the United Kingdom on January 17, 2016
Verified Purchase
TRS is funny
It is machine-gun fast, Austerity-target practice, at its best!

Staccato works for me

It diffuses all my anger, making me laugh at the absurdity of British Greed today, and for the foreseeable future!

And it galvanises, too!