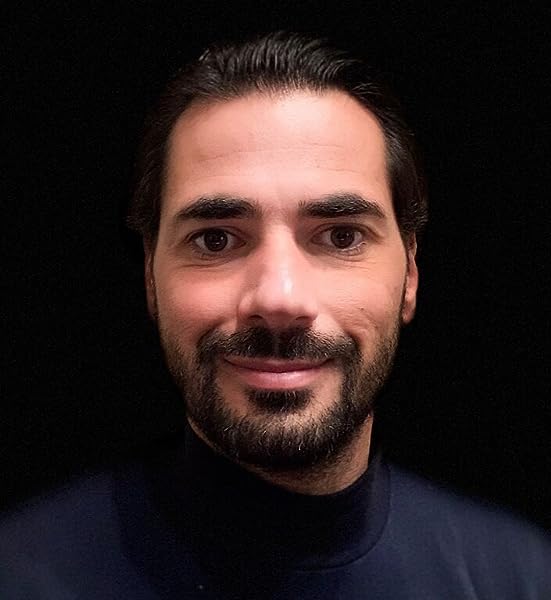 The "Recipes" of my Smile: How I kept myself fit during a pandemic year spent across Indonesia, Malaysia, Bucharest, Dubai and Calabria in southern Italy (Chef and Traveler Cristian Marino) Paperback – March 22, 2021

by Cristian Marino (Author)
5.0 out of 5 stars 2 ratings
Book 1 of 2: Chef and Traveler Cristian Marino
See all formats and editions
Sorry, there was a problem loading this page. Try again.

A strong story that tells one of the side effects of Covid-19 and how important it is to maintain an optimistic approach to life, always and in any case.
365 days of pandemic experienced by chef and traveler Cristian Marino.

This book is not intended to be a cookbook, but rather a way to share my learning of this unusual year and confirming that optimistic life approach has helped me a lot and this could help you too.
I am aware that we all faced difficult situations last year, but we have also learned a lot. Moreover, I am convinced that my story will also motivate or at least give you the clue to look at things from a different perspective and why not you will also have the chance to learn some of my culinary secrets.
.
In the first part of the book, I decided to tell about my misadventure locked up in a secret room-prison at the airport in Kuala Lumpur due to Covid-19 and of the longest 24 hours of my life.Next, I tell how my optimistic outlook on life reinforced by the recent work experience I had in Indonesia helped me stay fit.
The 7 benefits I have had by totally eliminating alcohol from my diet.

In the middle of the book, I describe 12 recipes, that I cooked during lockdown as you may have seen on the videos published last year on my social media channels.

Where you will learn among other things:.

As you can see dear reader friends, I did not miss almost anything and all the recipes in this book were done not in a professional kitchen but in a simple home kitchen during the quarantine time in Bucharest.
Mine is pure personal testimony of the benefits I have had during the year thanks to
three simple habits:Which helped me stay calm, keep an optimistic outlook on life and then focus on reinventing myself once again in my work.
You are now ready to enter my personal world through this book,let's go and find out together:

The "Recipes" of my Smile!

"How to Hug" by Maryann Macdonald for $5.67
Hugs can be tricky! But you can learn how to hug. Never hug anyone too tight―ouch! And don’t hug too many people at once―uh-oh! You can be a leg hugger or a bear hugger or a surprise hugger. If you don’t want a hug, it’s okay to say so. | Learn more

Cristian Marino is a chef, blogger, and author who has traveled the world since 1999 and currently resides in the Maldives. He is also a Certified Health & Nutrition Life Coach.

Born in Milan in February 1982, he moved to Calabria at a very young age, and soon Cristian began learning cooking from their parents' restaurant. At the age of 17, he left the South. He moved back to the North of Italy where he studied at the prestigious institute "Erminio Maggia" Hotel school in Stresa on the shore of the Maggiore Lake and spent the evenings working in hotels and restaurants in the area, sometimes as a cook and others as a waiter.

Before leaving Italy to explore the world, Cristian made sure that he attained enough of what Italy had to offer by working in different regions of the "Bel Paese." From the sea to the mountains, South to north, passing through central Italy, including Abruzzo, Calabria, Piedmont, Aosta Valley, and Lombardy. Wich means assimilating different traditions and cultures and learning other ingredients and techniques.

From established Executive Chef of 5 stars Hotels to Culinary Consultant:

His passion has taken Cristian across Italy, Europe, the Middle East, and Asia, where he has gained extensive culinary and life experiences.

Cristian's resume includes a travel experience in over 10 countries.

He has also obtained and maintained 'The Golden Q' from Ospitalità Italiana for most of the Italian restaurants he has worked.

He also received the 'Silver Plate "that he had obtained after a thematic dinner organized with the Accademia Italiana Della Cucina representative in one of the hotel's restaurants he had worked for.

He has experience in Italy, France, the UK, Spain, Croatia, Romania, Bulgaria, Indonesia, and Dubai. The chef has also traveled and been inspired by the over 30 countries he has visited while working for Silversea – a multi-awarded six stars Cruise Ship.

He affirmed his career as Executive chef in Europe for Radisson Blu and InterContinental.

He has now become an Italian Chef consultant for the global hospitality market and lives between Italy and the world.

Cristian Marino currently lives in the Maldives and works as an Executive Chef for one of the largest resorts in the country, gathering new experiences that will bring a unique "flavor" to his next book.

ALBERTO
5.0 out of 5 stars The recipe of my smile
Reviewed in the United Kingdom 🇬🇧 on May 19, 2021
Verified Purchase
Very interesting book and simply to read I really like the fact that is also based on true events, and It also help me to eat much healthier and keep fit . I Truly recommend to read this book.
Alberto

Amazon Customer
5.0 out of 5 stars How covid-19 affected us all in different ways.
Reviewed in the United Kingdom 🇬🇧 on June 1, 2021
Verified Purchase
An amazing true account of how Covid-19 affected someone in a different way than what we would have expected.
A detailed read of not only what was experienced by this person but also how the situation was dealt with in uncertain times.
Read more
Report abuse
See all reviews