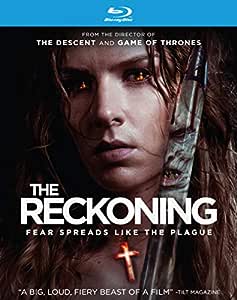 Secure transaction
Your transaction is secure
We work hard to protect your security and privacy. Our payment security system encrypts your information during transmission. We don’t share your credit card details with third-party sellers, and we don’t sell your information to others. Learn more
Details
Ships from
Amazon.com
Sold by
Amazon.com
Return policy: This item is returnable
In most cases, items shipped from Amazon.com may be returned for a full refund.
Read full return policy
The Reckoning [Blu-ray] has been added to your Cart
New & Used (14) from
$7.96 + $3.99 shipping

After losing her husband during the Great Plague, Grace Haverstock (Charlotte Kirk) is unjustly accused of being a witch and placed in the custody of England’s most ruthless witch-hunter, Judge Moorcroft (Sean Pertwee). Forced to endure physical and emotional torture while steadfastly maintaining her innocence, Grace must face her own inner demons as the Devil himself starts to work his way into her mind.

3.8 out of 5 stars
3.8 out of 5
638 global ratings
How are ratings calculated?
To calculate the overall star rating and percentage breakdown by star, we don’t use a simple average. Instead, our system considers things like how recent a review is and if the reviewer bought the item on Amazon. It also analyzes reviews to verify trustworthiness.
Top reviews

Wayne KleinTop Contributor: Classic Rock
HALL OF FAMEVINE VOICE
4.0 out of 5 stars A period thriller more than contemporary horror film.
Reviewed in the United States on February 7, 2021
Verified Purchase
A well made period thriller (rather than a horror film), Neil Marshall’s “The Reckoning” allowed him to step away from the disaster of the “Hellboy” reboot which suffered from such massive interference from the producers, the film just couldn’t possibly deliver.

When a woman and her baby survive the plague after the death of her husband, she faces increasing hostility from the towns people leading to a Witch Finder (Sean Pertwee) brought in to ‘interrogate’ her. She must endure the hatred and torture of the Witch Finder all the while holding on to her own sanity.

Marshall’s film isn’t a horror film like what most fans of the genre today might expect instead it’s a throw back to films like “The Witch Finder General” and the Poe cycle of films that Corman made (albeit with a bigger budget). It’s worth checking out and a very good film.

Richard Kissel
3.0 out of 5 stars Okay. Not amazing.
Reviewed in the United States on April 18, 2021
Verified Purchase
I feel there was a mix of "The Messenger" with trying to evoke a confession while either a real or hallucinatory event occurs in her cell, and a bit of "Conqueror Worm" with the torture to get that confession as a witch hunter.

I guess it's a kind of "slice of life" story in the bleakest way imaginable for the time.

I stayed engaged wondering what impact the hallucinatory devil would have, but it really didn't mean a thing in the end. They could have cut it from the film and it would have no impact on the story. A passive-aggressive "threat" that didn't even offer any substance towards her circumstances. It felt more like a check-the-box addition; like, they could have been going for more of a "VVitch" style of involvement, but it just didn't go anywhere.

Finally, while I'm sure the torture must have been unbearable, there wasn't really anything visceral to it, making her struggle seem a bit off the mark. Like, she didn't hobble, she wasn't really decrepit, and she basically seemed fine physically after the ridiculous amount of blood they supposedly cut from her. For instance, the Squire gets one little stick in his ribs and he's all like, "I'm done for," and she's full-strength swinging a sword around and flexing her Jackie-Chan-esque foot-stool defense maneuvers.

I guess it was worth watching once, but probably not twice.
Read more
Helpful
Report abuse

Jennifer L Sanchez
1.0 out of 5 stars This is not a horror movie.
Reviewed in the United States on February 14, 2021
Verified Purchase
It's not a psychologic thriller either. There's nudity and torture and not nearly enough plot.
Read more
5 people found this helpful
Helpful
Report abuse

Creature Feature
5.0 out of 5 stars Started out a little slow, but it really kicked in by the End!
Reviewed in the United States on April 7, 2021
Verified Purchase
Great Period Piece on the burning of Witches in Europe and North America.
Story really done well and so we’re all the scenes and Characters.
Sound and Music very nicely done.
The Torture and insensitivity in this Movie grinds thru too the End!
Read more
Helpful
Report abuse

Lisa
2.0 out of 5 stars Silly Movie, No Horror
Reviewed in the United States on April 17, 2021
Verified Purchase
Good acting by the one actor (Joe Anderson) who was barely in the movie. The storyline has potential but couldn’t get passed the terrible acting of the lead character. I fell asleep which never happens to me during a horror movie.
Read more
Helpful
Report abuse
See all reviews