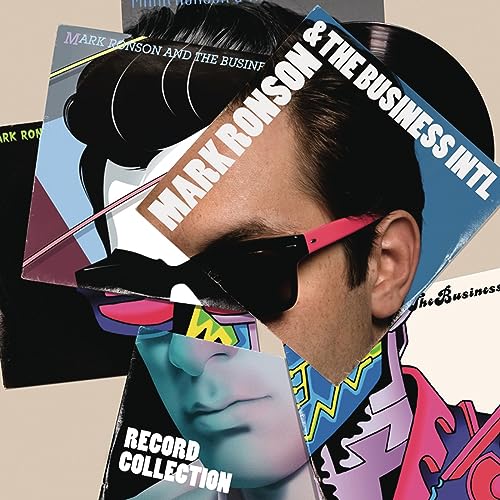 4.5 out of 5 stars
4.5 out of 5
121 global ratings
How are ratings calculated?
To calculate the overall star rating and percentage breakdown by star, we don’t use a simple average. Instead, our system considers things like how recent a review is and if the reviewer bought the item on Amazon. It also analyzes reviews to verify trustworthiness.
Top reviews

C. Acey
5.0 out of 5 stars Ronson Keeps On Growing!
Reviewed in the United States on September 28, 2010
Verified Purchase
After success with his poppy Motown meets Camdentown sound on his own album "Version" as well as the even bigger hits that were Amy Winehouse's Back To Black and Lily Allen's Smile, Ronson could have just kept on coasting by on his signature horn section, GQ award-winning good looks, storied socialite status, and obvious charm, but the producer chose to turn a corner into unknown territory. This album is almost the equivalent of comedian Jerry Seinfeld throwing out all his old jokes in the documentary "Comedian"; it's a leap but it works, and much like the aforementioned documentary a lot of old and new faces are along for the ride. "Record Collection" reflects a Ronson who has clearly studied up (most notably with 80s legends Duran Duran) and is thus justified in geeking out with synthesizer rigs and cameos from artists like Boy George and Simon LeBon, whose records surely must have been some of the earliest in Ronson's own personal collection. In addition to those cameos, I really appreciate the way that Ronson gives a push to less-known artists like Kyle Falconer, MNDR, Andrew Wyatt, and Spankrock --inspiring us in the Google generation to do our own digital "crate digging" and find out more about these new voices. While the album lags in spots (most notably the seemingly pointless elevator music interstitials like "The Colour of Crumar" and "Selector"), it is still a solid pop records with a lot of gems that will maintain heavy rotation at my house (the afrobeat burner "Somebody to Love Me" featuring Andrew Wyatt and Boy George being the absolute stand out); with its blend of old and new into something fresh and now "Record Collection" gets my heartfelt stamp of approval. Get it!
Read more
10 people found this helpful
Helpful
Report abuse

Karen
5.0 out of 5 stars Surprised and I love it
Reviewed in the United States on January 12, 2011
Verified Purchase
I'm familiar with a much of Ronson's work as a producer, and know he's got the Midas touch. I wanted to check out his own work sort of on a whim. The best decision so far of 2011. LOVE IT. It's on heavy rotation.

He does a masterful job of juxtaposing such a range of musical and vocal styles over an electronic base, and it just works.

Yeah, I realize that's fully half the disc. But this is the disc to put on your best sound system and play LOUD.
Read more
One person found this helpful
Helpful
Report abuse

Dave from the States
4.0 out of 5 stars Four stars... or three: Interesting producer made album
Reviewed in the United States on March 16, 2017
Verified Purchase
Nowhere near as strong as Uptown Special, but still has some pretty neat stuff on it. "Somebody To Love Me" is easily the best cut. An album like this, thrown together by an artist/producer, shouldn't be good... but Ronson seems to pull it off rather well.
Read more
Helpful
Report abuse

FloridaGirl
5.0 out of 5 stars Wonderful album - worth trying
Reviewed in the United States on January 14, 2012
Verified Purchase
A friend of mine suggested this album to me. I borrowed it from my local library and to be honest, the first time I listened to it, I wasn't that impressed. However, I have a policy to always listen to an album twice through before making a final decision as to whether I like it or not and by the time I had gotten through the second time, I was hooked. I liked it enough to buy the entire album and not just download a song or two.
Read more
Helpful
Report abuse

Johnny M.
4.0 out of 5 stars Bang Bang Bang
Reviewed in the United States on July 21, 2015
Verified Purchase
"Bang Bang Bang" is one of the greatest hit songs you've never heard. With vocal guests MNDR and legendary rapper Q-Tip, the song is a triumph of retro-synths, bumping beats, and a great chorus. Many of the other songs, such as "The Bike Song" and the title song are breezy and fun as well. A good mood pervades.
Read more
Helpful
Report abuse

Todd A Blankenship
5.0 out of 5 stars New with Every Listen
Reviewed in the United States on October 2, 2010
Verified Purchase
Never really provided a review for an album on Amazon, but I feel the need for this one. Not being terribly familiar with Mark Ronson prior to listening to Record Collection, I don't have a great deal of context for his music, but this is an album that I appreciate more with each listen. Bang Bang Bang is of course the radio-friendly track (not that that's a bad thing, as it is a very catchy song), but the less-obvious pieces exhibit great creativity. Somebody to Love Me and The Night Last Night are especially surprising songs where beats and lyrics that don't seem to go together instead work incredibly well. Highly, highly recommend this album.
Read more
2 people found this helpful
Helpful
Report abuse
See all reviews

bookerman
5.0 out of 5 stars Fantastic
Reviewed in the United Kingdom on August 15, 2019
Verified Purchase
I love this album from beginning to end. While there is the odd lyric that doesn’t work, particularly on the bicycle song, most of it is fresh and exciting.
Read more
2 people found this helpful
Report abuse

Mr. K
5.0 out of 5 stars Sublime!
Reviewed in the United Kingdom on December 2, 2011
Verified Purchase
Simply buy it! Its one of those albums where you instantly like a couple of songs but then others uncover themselves as you listen to the album. I came to this album because of 'Somebody to Love' performed live on Jools Holland's show. Currently however my most listened track is either 'The Night last night' or 'You gave me nothing'. Its great as well as its one of those albums you can stick on random and it doesn't matter, great party album for background ambience too. Sometimes this album reminds me of Grove Armada's 'Vertigo' album.
Read more
One person found this helpful
Report abuse

adrian donnelly
2.0 out of 5 stars Very disappointed
Reviewed in the United Kingdom on February 5, 2019
Verified Purchase
First play suggests that I will not be playing again in a hurry.
Read more
Report abuse
See all reviews