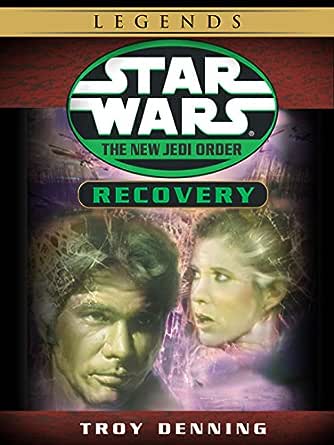 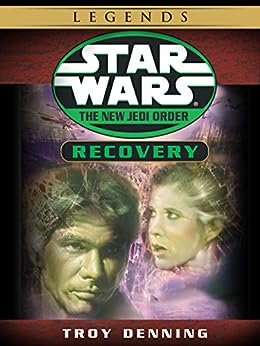 David PruetteTop Contributor: Star Wars
VINE VOICE
4.0 out of 5 stars The Solos come together
Reviewed in the United States on January 11, 2014
Verified Purchase
Recovery is a novella by Troy Denning that was first published as an e-book. It takes place after the events of Kathy Tyers’ Balance Point, and the title refers primarily to the recovery of the Solo marriage. Han has been estranged from his family since Chewie’s death, and the healing process for the Solo family only really began to happen in Balance Point. Mr. Denning’s novella continues the recovery process, especially the emotional part.

The story begins in a hospital on Corellia, and we get to hear from Han’s cousin Thracken Sal-Solo. Thracken was the one responsible for the firing of Centerpoint Station a couple of books ago, an effort that ended with mixed results at best. Several other Jedi are introduced as the story moves along.

At the end of the story our heroes are making a mad dash back to Coruscant to halt or at least influence an important Senate vote. This is not surprising. Throughout the New Jedi Order series so far the Senate and the New Republic leadership are constantly causing problems and making extremely questionable decisions.

Mr. Denning has more Star Wars books coming down the road, so Recovery is well worth reading. It can give you an idea of his style and possibly a little better understanding of some of his Jedi characters.
Read more
Helpful
Comment Report abuse

Norma Hatley
4.0 out of 5 stars Star Wars Recovery
Reviewed in the United States on October 7, 2012
Verified Purchase
I liked the story. It filled in the missing information after Leia was beaten by Tsavong Lah's amphistaf. Recovery told the nature of Leia's wounds, her initial recovery in Corellia, and brought Han into the story as he guarded her in the Bacta Ward. Naturally, there was trouble as Thracken Sal-Solo was also brougt back when his thugs, who didn't know Han was there when they tried to kidnap Leia, failed. Two new Jedi were brought into the story when the fire-fight started in the Bacta Ward, Izal Waz and Eelysia (who was also in bacta). The story broadened as the Solo's fled Corellia with Waz, 3 Barabell Jedi, and Eelysia, the Master of Saba Sebatyne. Eelysia had also been severely wounded by amphistaf. Eventually, Han and Leia go to Coruscant to stop Viqi Shesh from outlawing Jedi and/or turning them over to the Vong as a "peace offering." Their arrival sets off another set of typical Solo luck, when thugs from Shesh's office try to kill them before they can get to the meeting. They, too fail and as the meeting gets underway, Leia is escorted by her 3 children, brother and most of the Jedi on the planet. Viqi's effort fails and her minion at the meeting is found dead. Leia recovers and walks again.
Read more
One person found this helpful
Helpful
Comment Report abuse

R Strickle
5.0 out of 5 stars Great read
Reviewed in the United States on February 4, 2020
Verified Purchase
I loved this short story. Nice little companion to the series in whole. The author made evident the danger of the situation and drew the reader in. I recommend this book to all Star Wars fans.
Read more
Helpful
Comment Report abuse

Amazon Customer
4.0 out of 5 stars Not a necessary read, but I liked it
Reviewed in the United States on July 20, 2012
Verified Purchase
I have a version of "Star by Star" that does not include the novella "Recovery," so I downloaded this book onto my Fire. "Recovery" tells of Leia's recovery after she was nearly killed in "Balance Point." If it was meant to tell the story of the healing of Han and Leia's relationship, it surely failed. There was far too much action to attempt much more than a few brief moments or reconciliation. They have a deeper understanding of each other but not much time to work on it.

Is it a necessary read? Not really. I could have skipped it (I actually did) and not miss much. It felt like the extraneous part of a book that had been edited out, like in the DVD's, where it's billed as the extras. People pay to see those extras. I did. It was worth it, but probably not to everyone.
Read more
Helpful
Comment Report abuse

Donald Lovett
4.0 out of 5 stars Star Wars all the way
Reviewed in the United States on May 22, 2020
Verified Purchase
This Book just keeps you going and coming back. Kind of like actually being there. A good night time read.
Read more
Helpful
Comment Report abuse

A. Napier
1.0 out of 5 stars What a HUGE WASTE of money
Reviewed in the United States on June 18, 2010
Verified Purchase
This book is actually the prologue of Star by Star, 2 books further into the series. There is no reason to buy this book when you can read this whopping 82 pages as the prologue in another book. This is not advertised anywhere in the review or information pages of this book. DO NOT BUY THIS KINDLE BOOK. Instead buy Star by Star and read it there, and get the entire Star by Star book as well. For the same price. Luckily this book beamed to my kindle before they realized my credit card had expired and I wasn't charged. Neener Neener! I'd say I won but since I already owned the Star by Star book I feel like I just broke even.

Thanks Amazon for trying to swindle me out of $2.99. Better luck next time.
Read more
27 people found this helpful
Helpful
Comment Report abuse

Joshua VanLoan
4.0 out of 5 stars Good short story great Han + Leia
Reviewed in the United States on May 6, 2018
Verified Purchase
Surprisingly I actually enjoyed this short story more than I enjoyed Balance Point(The novel preceding it). I liked how they thwarted Viqi Shesh, and the new Jedi were interesting.
Read more
Helpful
Comment Report abuse
See all reviews

jimbo36uk
5.0 out of 5 stars Great book
Reviewed in the United Kingdom on August 6, 2011
Verified Purchase
I have waited for ages for Star Wars books to come to Kindle UK. This book is for the original older Star Wars fans who wondered what happened in the intervening years. It may not join up with Episode I,II,III in your opinion.

This is a LucasBooks version originally published in December 2001, no longer available in printin UK.

Original Characters are Princess Leia Oragana Solo, and Han Solo and in memory keeps to the original story.
Its centres on getting to the New Republic strife ridden capital at Coruscant. Bonus story is the layout of the New Republic and all for £1.52 which is a low risk price. Text to speech enabled.96 pages it a nice short read.There are 21 books in this series.

Warning: This may drag you into the Dark Side!.
The theme is:Kill all Jedi and anyone helping them.
Well what do you expect from a Sith!.
Read more
2 people found this helpful
Report abuse

Andy Winkley
3.0 out of 5 stars Pretty steady
Reviewed in the United Kingdom on November 20, 2014
Verified Purchase
Possibly the weakest book I have read in the star wars universe. Still good for a fan but not a good starting point for a new comer or undecided. Plot is tricky to follow in places and i think because I have not much around the new jedi order etc I was missing out on things.
Read more
Report abuse

Philip Slator.
4.0 out of 5 stars Leia recovers her grit
Reviewed in the United Kingdom on November 11, 2014
Verified Purchase
A short story telling what happened to Leia after the battle on Duro and how she started to uncover Viqui Shesh's involvement behind her assassination attempts. Good background information.
Read more
Report abuse

Kevin Seddon
5.0 out of 5 stars Loved this story
Reviewed in the United Kingdom on April 16, 2014
Verified Purchase
this part of the series was fast paced and action packed and great for getting up and on into the next chapter of the series, i will read it over again.
Read more
Report abuse