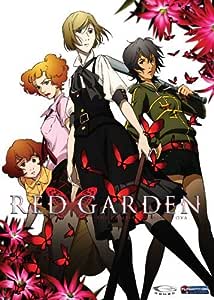 While alive, Kate, Claire, Rose, and Rachel each explored the streets of New York with the promise of limitless futures unfolding before them. But now, brought together as members of a blood-stained sisterhood, their once-delicate hands reach out to silence demonic beasts no ordinary weapon can destroy. Brutally murdered only to be resurrected as clandestine killers, the girls must stalk their prey with a primal ferocity – or risk losing what remains of their so-called lives. The only clues to their tragic past are a swarm of crimson butterflies and the mysterious woman who carries the harrowing secret behind the lives they lived – and the walking corpses they’ve become.

winterSnowCloudTop Contributor: Anime
VINE VOICE
3.0 out of 5 stars Oh what could have been…
Reviewed in the United States on August 14, 2017
Verified Purchase
Own, Online Viewing, or Evade
This show basically only worth online viewing.

Overall Rating 3/5
The show is something like killing these undead. These take something special to send the undead back to the grave basically

This one could have been a lot better, A LOT better. Most of it is the leading teenage girls coming to terms with the fights with monsters they have to fight for reasons not revealed until nearly the end of the show. I’m fine with the delay in answers. But the leads are such basket cases for sooo long it goes beyond my tolerance. The fights eventually get pretty cool. That why I say this show is worth online viewing…

Theme Songs 4/5
This series has some interesting kind of catchy music. I never skipped.

Ending 4/5
NO spoilers, the end was pretty solid. The end was when the show really picked up. It’s too bad rest of show wasn’t nearly as good.

Christopher Barrett
4.0 out of 5 stars Starts off slowly, gets more interesting, never really delivers...
Reviewed in the United States on November 9, 2011
Verified Purchase
I have to say that I was ready to turn this series off after two episodes. The female protagonists were so grating with their constant bickering and talking all at once. It was worse in the English dub (I tried both). But after a few faltering steps forward, the series gets going, and the characters seem to come to grips with their situation and calm it down.

So here are four girls. Dead. The mysteriously brought back to life. They are commanded by a mysterious (and ugly) woman to slay demonic appearing men or face true death.

So that's how things start. It is set in New York, which is fun. Trying to listen in English was nice (seeing how it is New York), but the Japanese voice acting is better. I flip between the two audios at whim and have to say that there are pros and cons to both. The settings are well researched, and it truly appears to be based on real New York locations.

The story starts off convoluted enough, but then manages to sort itself out. I would say that it's not really a horror genre or a demon slayer genre, but something in between. It reminds me a bit of Witch Hunter Robin (though Witch Hunter Robin has an A+ story).

My biggest beef is that while the animation and settings are nice, the picture quality is terrible. I don't think it was an intentional mask put over the series to give a grainy texture, instead it looks like bad digital transferring. Everything just looks hazy, like old TVs with rabbit ears... where you get the station coming in but it's just a bit hazy. Now I'm okay with an intentional mask, like in Ghost Hunt (in some of the creepy scenes), but if it is a mask then why does it appear 100% of the time, even during daylight. Plus it's not obvious enough to be intentional. It would probably look okay on a smaller screen, not my 48" LCD. Gonzo is top notch, so I don't think they would have let this slide for the original.

My only other beef is that the story is just 'hem'. The girls are all somewhat interesting, but not really overly likable. My favorite characters were the 'bad guys'!

But stick with it for at least four episodes and you will likely finish the set.

And for less than $14 you can't go wrong!
Read more
One person found this helpful
Helpful
Report abuse

Tubsiwub
5.0 out of 5 stars Nice and Neat
Reviewed in the United States on May 27, 2012
Verified Purchase
I'll write this review in two sections: Actual Show review and Package review.

Now, if you aren't all for violence, I do not recommend this show. The show itself shows very little in way of violence, and the only murdering or blood it even presents to the viewer is done in a very stressful way to show the impact that being forced to kill someone or something has on the human mind. The show is more about family ties, friends, an overlying problem having to deal with two waring families and the lives being affected by horrible time and place accidents. I'd rate this show highly, yet it's not my all-time favorite either.
The character reactions and attitudes are believable. I found myself impressed by the quality in that department. However, the actual image quality of the show isn't very good. I doubt it's because it's on DVD, but the screen has a sort of fuzzy quality to it throughout the whole show. It may be on purpose, but it doesn't look too good in the end.

For those of you ordering through Amazon and choosing to have Amazon package and ship it to you, the packaging is the perfect size for the item and its quality is good enough with minimal cardboard which I like. You all probably know what the package will be like if you've ordered through here before. The show comes with no special features worth watching (from what I've seen on Disks 1 and 2 so far) except a textless opening. This is the S.A.V.E. package though, so you shouldn't expect much anyway.

Overall, I highly recommend this show. It's quite the attention grabber.
Read more
5 people found this helpful
Helpful
Report abuse

C. Weaver
5.0 out of 5 stars Interesting...
Reviewed in the United States on January 13, 2012
Verified Purchase
This anime has an interesting story line. You really think you're dealing with the old zombie or vampire movie set up at first and then you start getting the back story and it's a bit more complicated than that. The most interesting thing about this series are how the characters change as they go thru this series. By the time you get to the OVAs you find youtrself thinking, "Were these the same girls as at the first of the series?" They undergo such a change that you tend not to realize who is who on the OVAs. Again a anime series worth having.
Read more
One person found this helpful
Helpful
Report abuse
See all reviews

Diana Morne
5.0 out of 5 stars See it through until the end
Reviewed in Canada on June 21, 2013
Verified Purchase
I was a bit put off at first by the artwork and off key singing and certain characters whining. However, I kept watching, and then I couldn't stop! I set those things aside, first the artwork because it wasn't that it was bad, it was just different. Then the off key singing I could ignore because it didn't happen often at all and in real life not everyone's a singing sensation and these girls are supposed to be ordinary in most senses. (also, its actually supposed to be bad singing, so its not that the actors are horrible or anything. I thought they were very fitting to each character). And again, the whining of certain characters makes sense to just how real people might react in the situation. Some people are quick to accept things and fight and others are petrified. Some people call this anime slow moving, but I didn't find that at all. Everything in it was relevant to each character and their personalities and what they were going through.
I like it because its a dark anime that doesn't just rely on action, though the action is there (and messed up zombie-like creatures), it relies on psychological plotlines. Its a very original anime horror and worth watching until the end, and then watching again for anything you might've missed.

This is a dark anime with a feminine touch, I think that's the best way I can put it without giving anything away. Its excellent.
I won't give spoilers, but I will say that I'm hooked on this anime, and there's a reason that I gave it 5 stars.
Read more
Report abuse

BrotherOdd
5.0 out of 5 stars Beats Hollyoaks
Reviewed in the United Kingdom on May 8, 2011
Verified Purchase
As an amine goes this had a lot of focus on how the girls try to adjust to their new lives without changing who they are. A more realistic perspective of heroism, it was more human than super human which kept the whole thing grounded which made it easy to shock n awe with the impossible than say if they had super strength or telekenisis. The girls all brought something different to the table and I especially liked how each girls life was so almost dramatically different from each other. They did well not to make this get out of hand and keep it dark and shocking through to the end.

This like no amine I've yet to come across. It explores the recesses of fight or flight and length people go to to get a normal life.
Read more
3 people found this helpful
Report abuse