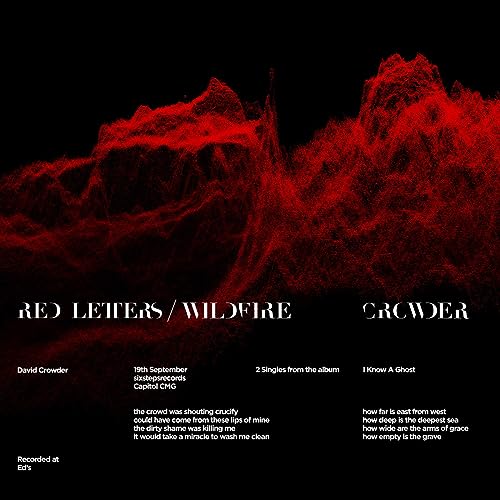 Listen Now
Your Amazon Music account is currently associated with a different marketplace. To enjoy Prime Music, go to Your Music Library and transfer your account to Amazon.com (US).

Jake West
4.0 out of 5 stars Crowder Is Back With Two New Singles!!!
Reviewed in the United States on September 22, 2018
Verified Purchase
David Crowder has been continuing to grow his own unique sound in the 'Christian & Gospel' music scene! His two new singles off of his upcoming album "I Know A Ghost", are both very heartfelt, genuine, and incredible! "Red Letters" is a beautiful song about God's amazing grace for us, and His sacrifice He made on the cross. Crowder sings with so much passion and heart, which makes "Red Letters" even more powerful! "Wildfire" is a new addition to Crowder's signature 'Swamp Pop' sound! Gritty Harmonica and Banjo flood your speakers, with a heavy Hip Hop beat overtop! Along with a mix of vocal sampling and swampy sound effects, "Wildfire" is a hit! If you are a fan of David's previous albums, such as "Neon Steeple" & "American Prodigal", you will absolutely love these two new singles!
Read more
One person found this helpful
Helpful
Report abuse

Jason McGuire
5.0 out of 5 stars Crowder is awesome!
Reviewed in the United States on September 30, 2018
Verified Purchase
Anything Crowder is awesome! Love the songs and look forward to more!
Read more
Helpful
Report abuse
See all reviews