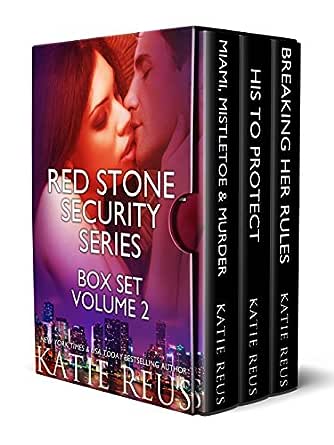 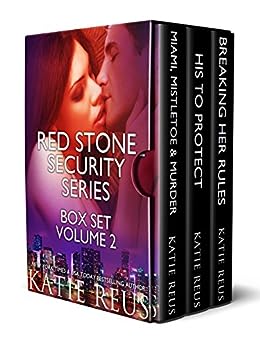 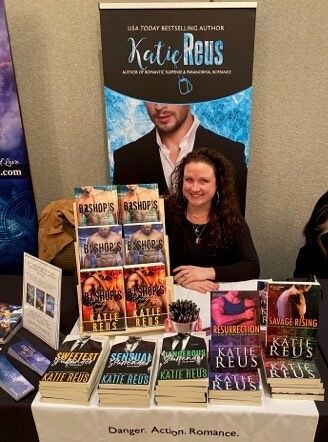 Katie Reus is the New York Times and USA Today bestselling author of the Red Stone Security series, the Moon Shifter series andthe Deadly Ops series. She fell in love with romance at a young agethanks to books she pilfered from her mom's stash. Years later she loves reading romance almost as much as she loves writing it. However, shedidn't always know she wanted to be a writer. After changing majors many times, she finally graduated with a degree in psychology. Not longafter that she discovered a new love. Writing. She now spends her dayswriting dark paranormal romance and sexy romantic suspense.

For more information on Katie...

4.4 out of 5 stars
4.4 out of 5
247 global ratings
How are ratings calculated?
To calculate the overall star rating and percentage breakdown by star, we don’t use a simple average. Instead, our system considers things like how recent a review is and if the reviewer bought the item on Amazon. It also analyzes reviews to verify trustworthiness.
Top reviews

MsRomanticReads
4.0 out of 5 stars Each book can stand on its own. If you had to choose, I'd say go for this one and skip Vol.1
Reviewed in the United States on July 20, 2015
Verified Purchase
One thing about sets, it allows you to read the books in order, as well as back-to-back. That's when you notice things like patterns if there are any. I liked was seeing some multicultural/interracial couples, the heroes were all former military, and out of the six heroines, I liked five of them for being tough and bold.

What didn’t work well for me was the almost formulaic execution of each story. They were all very similar, predictable: Each story was told from three POVs— the hero, the heroine and the villain. The suspenseful climax in each story was dealt with a little too quickly. Each heroine would be in grave danger, their men were miraculously in the vicinity or came to the rescue in record time, and then without much fanfare, it was all over. If I had to choose between the two sets, I enjoyed books 4-6 more (in part due to the delectable Travis Sanchez). With that said, I won’t be continuing with the Red Stone Security series.

Book Four: Miami, Mistletoe & Murder - My favorite. Loved the pierced, tattooed and reserved hero. The romance was the highlight of the story. - 4.5 Stars
Book Five: His to Protect - Secret baby and reunited lovers story. The heroine was predictable, but I appreciated that the hero remained patient and persistent and always made his intentions clear. - 3 Stars
Book Six: Breaking Her Rules - Best Friends to Lovers to Married Couple. The H and h were both tough, stubborn and very passionate. The suspense was probably the best out of the three. - 4 Stars
Detailed reviews on each book on their respective pages.

Karli
5.0 out of 5 stars Love this series!
Reviewed in the United States on July 12, 2013
Verified Purchase
The series has moved beyond the brothers who co-own Red Stone to agents introduced in the previous books. Book One is about Travis, the tattooed, pierced, Mohawk wearing good guy who has fallen for the owner of the coffee shop near the office. When he accompanies her to help out a friend in danger, Travis has to use lethal force to protect the women from a home invader. But the deceased' s brother wants revenge. In Book Two, Kell finds out he is the father of a three month old boy, and talks the mother into moving in to give him more time with his son. Then she witnesses a murder, placing herself in the sights of an assassin, and someone from Kell' s recent past wants her out of the picture as well. In Book Three, Iris is heading up security for a team assigned to a business meeting when her husband of a month walks in. A husband she has told no one about, who refuses to give her a divorce, and who wants her to leave her job with RSS. Then someone tries to kill him and Iris finds herself protecting the man who is driving her crazy.

These books have everything I love in a series- action, suspense, fully developed characters, steamy love scenes, a plot that keeps building, and interaction with characters from prior books. I love the series and can't wait for more. It is on my reread and recommend lists.
Read more
9 people found this helpful
Helpful
Report abuse

N1kita
4.0 out of 5 stars Not as strong as the first box set
Reviewed in the United States on April 12, 2016
Verified Purchase
Oookay... This box set is not as strong as the first one. It's not solid 4, more likely 3.5 starts.
I found the first and second stories of this book were somehow lack in something. Really difficult to say what but I somehow didn't feel quite engaged with the characters. I didn't feel the love nor the suspense. Was it because of my state of mine? Could be. Anyway, I could only rate those two stories as 3 stars top (leaning to 2.5, really). However, the third book was very interesting. I love it when the kick-ass guy was a girl (eh, okay, bit confusing there, but you know what I mean). Honestly, I was a bit disappointed because the hero was still some kind of kick-ass guy (former force recon, grew up tough, etc). Why should he be like that? Why can't he be some genius computer mogul with kind heart who needed real physical protection from a kick-ass girl? Well, one can only hope. However, I still loved the story, I could connect with the characters and invested in them, thus the 3.5 stars.
I would still continue this series though. Power through...
Read more
2 people found this helpful
Helpful
Report abuse

Angie Mike
4.0 out of 5 stars MIAMI, MISTLETOE & MURDER ~ HIS TO PROTECT ~ BREAKING HER RULES
Reviewed in the United States on October 24, 2017
Verified Purchase
RED STONE SECURITY SERIES BOX SET: VOLUME 2 contains stories 4-6 in the series but can easily be read by themselves. However, I would still recommend picking up the first three books (or volume 1) before starting on this set, since some of the characters from those stories do pop up every now and again. I also think most readers will be more emotionally invested and just enjoy the entire series more if the books are all read in order.

This novella has Travis Sanchez, a former Marine and current contractor for Red Stone Security coming to the aid of Noel Baskov, the woman he's been lusting after for months... I remember Travis from "Danger Next Door" which is book two, and just happens to be my favorite in this series so far. I'm glad he got his own story because he was not only gorgeous, but sweeter than you expect a huge, tatted, and pierced guy to be. Noel was really kind and cute too, and together I thought they made an adorable couple. With likable characters, a smoking hot romance, and just enough suspense, this story was both fast and fun. My only complaints would be that the villain was a bit of a letdown and the "I love you's" came a little too quickly.

Kellen Malone is a former SEAL who now works as a bodyguard for Red Stone Security. Then Charlotte Bastien walks back into his life with their infant son in tow, and witnesses a murder... This book was not only fast paced, but had a wonderful blend of both romance and suspense. I adored Kell and Charlotte together and just loved the way he loved her. I also loved the fact that she never doubts him, even when the crazy ex is running her mouth off. Although only a novella, it was an engaging read that was hard to put down. And though I found the drama with Kell's ex predictable, the showdown with the villain was not what I was expecting at all. In the end I just thought it was a lovely and compelling romantic suspense.

Iris Tarango is a former Marine and a top agent for Red Stone Security. But when an attempt is made on billionaire Wyatt Christiansen's life (a man she shares a long history with) her life will be forever changed... This is more of a friends to lovers story, since Iris and Wyatt had known each other since they were kids. As a couple their chemistry was not only potent, but all consuming. And while he was definitely an alpha male, Iris was a tough woman who was more than capable of taking care of herself. The entire story was not only fast paced and romantic, but full of action and suspense, and included some shocking surprises. I'd have given this book five stars if not for the villain, who was a little too obvious and whose motive was a bit weak.
Read more
Helpful
Report abuse
See all reviews

Ame Hae
2.0 out of 5 stars Average but not as good as books 1-3
Reviewed in the United Kingdom on May 22, 2016
Verified Purchase
Not as good as the first three books - the storylines were repetitive and unbelievable and while the romance was there, the suspense was questionable and bordering on ridiculous. Also, they seemed to finish too suddenly - each book (which wasn't long, this can only really be described as novella length at best) was focussed on building drama with a promise of a massive confrontation, but we never really got it... they finished so suddenly with no real emotion, it sort of felt like the author had gotten bored and given up.

I won't be continuing with the book seven.
Read more
Report abuse

Teri
5.0 out of 5 stars Vol 2
Reviewed in the United Kingdom on October 2, 2020
Verified Purchase
This box set is about Travis, Kellan and Iris. I have read these books ,any times and each time is like starting a brand new book. I cannot put these babies down.
Read more
Report abuse

Creader
4.0 out of 5 stars Entertaining
Reviewed in the United Kingdom on September 3, 2013
Verified Purchase
A good selection of stories that offer good value. First time I've read any from this series and was duly entertained by this selection. I do have some reservations about the lack of grip in the area of grammar and some spelling that the author seems to have a problem with. Nonetheless well worth reading.
Read more
Report abuse

Castiel
4.0 out of 5 stars good mix of characters, action and ...ahem...love
Reviewed in the United Kingdom on June 22, 2013
Verified Purchase
Finally a writer of romantic suspense that can manage the suspense part. Yay! Good series of loosely connected stories all based on the Red Stone security operatives. These stories don't have to be read in order, although you get mentions of the other couples if you do. Compliments vol.1 stories, but not essential.
Read more
Report abuse

Mica Mills
5.0 out of 5 stars Love Katie Reus
Reviewed in the United Kingdom on October 3, 2014
Verified Purchase
Love love love Katie Reus, and these books do not disappoint! Only thing I will say about the red stone security series is that I wish each book was a bit longer, some seem to wrap up really quickly at the end. But awesome books!
Read more
One person found this helpful
Report abuse
See all reviews