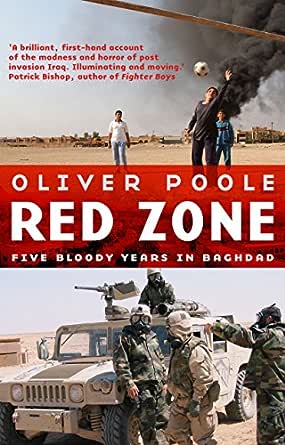 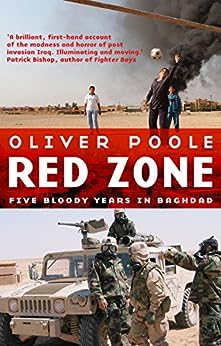 Starred Review. At the beginning of the Iraq war, Daily Telegraph journalist Poole was the only Brit embedded with U.S. troops, accompanying them on their three week mission into Baghdad (chronicled in his 2003 title Black Knights). Haunted, Poole returned to Iraq in 2004 and stayed through 2007, after most journalists had already decamped. The new situation he faces is, in his words, "really bad," a population of 7 million "reduced to barbarism." It doesn't take long for the violence to make a personal impact; while Poole's new editor in London demands positive spin, the brother-in-law of Poole's friend and translator is kidnapped, never to be seen again. The differences a few years make are incredible: camping with troops pre-invasion, Poole was upbeat, happy with his "massive story"; by the time he left the "iconic reporter's hotel" Hamra, once a hub of activity, food, camaraderie and entertainment, it was the bombed-out center of a Baghdad "war cemetery." Poole is a fascinating narrator, chronicling his own disillusionment alongside the stories of his Iraqi friends and the deteriorating state of the nation. Hard to put down, this hard-hitting but deeply compassionate memoir showcases an expert reporter pushing his skill and humanity to their limits. 8 color plates and maps. --This text refers to the paperback edition.

Oliver Poole first entered Iraq in March 2003 after crossing the Kuwaiti border as the only British daily newspaper reporter 'embedded' with the US Army. His account of the invasion, Black Knights: On the Bloody Road to Baghdad (HarperCollins) sold over 30,000 copies. Oliver Poole is currently working as a head hunter in the oil and gas industry.
--This text refers to the paperback edition.

5.0 out of 5 stars
5 out of 5
8 customer ratings
How does Amazon calculate star ratings?
Amazon calculates a product’s star ratings based on a machine learned model instead of a raw data average. The model takes into account factors including the age of a rating, whether the ratings are from verified purchasers, and factors that establish reviewer trustworthiness.
Top Reviews

A Thoughtful Consumer
5.0 out of 5 stars A Different Angle on the Iraq War, Well Worth Your Time
Reviewed in the United States on May 11, 2017
Verified Purchase
Poole was a British journalist in Iraq during the reconstruction and up to the ramp up for the Surge. While he spent some time with the military, most of the book covers his time with his Iraqi news and security team. It tells the story of ordinary Iraqis and the incredible acts it took just to get through a day. Poole does a great job of journalism by not favoring either side, just reporting what he saw or experienced. A real different view of the aftermath of Saddam Hussain and what he left as his legacy.
Read more
Helpful
Comment Report abuse

1OLD MAN
5.0 out of 5 stars EVERYONE SHOULD READ IT. Not a war story. ...
Reviewed in the United States on July 21, 2016
Verified Purchase
EVERYONE SHOULD READ IT. Not a war story. This is the story of a British news reporter’s unbiased coverage of happenings in Iraq. The politics; the war; the life of the average Iraqi people; as well as the persons killing each other. If you have no opinion, read it. You may gain an opinion. If you don’t have an opinion, read it. You may change your opinion. You may ask WHY? WHAT HAS ANYONE GAINED? WHAT WILL HISTORY SAY?
Read more
Helpful
Comment Report abuse

Kindle Customer
5.0 out of 5 stars Absolutely awesome AAA++++
Reviewed in the United States on May 8, 2019
Verified Purchase
I was impressed reading this book, his first book was very good but this book is on another level , a must read for anyone interested in the middle east
Read more
Helpful
Comment Report abuse

Lance B. Hillsinger
5.0 out of 5 stars The Baghdad story: A story of many parts
Reviewed in the United States on January 24, 2015
Red Zone by Oliver Poole documents life in Baghdad in the years following the conclusion of the Gulf War. Poole served as bureau chief for the British newspaper, Daily Telegraph. So, naturally, a few chapters, focus on the British troops, but the “British story” is just one many aspects of telling the overall story.

Poole, wisely, doesn’t try to establish an overall theme. Rather “the story of Baghdad” is told in pieces: The heroism and attitude of the soldiers, the suffering of the innocent, the power politics in Iraqi and elsewhere, and in his own story in what it took to “gather the news.”

As one would expect from a journalist attached to a major newspaper, Poole’s writing is clear, informative, and objective. Despite there being many aspects to the storyline, the narrative is straight-forward. Red zone is quite graphic in places, but that is the reality of war. Poole does not sensationalize the horrors of war, but neither does he sugar-coat the carnage.

Iraq was, and remains, a dangerous place for journalists. Part of the proceeds from the sale of Red Zone, goes to PEN an organization devoted to protecting freedom of the press. For his decency in forgoing “maximum profit” to support journalistic freedom, his unique view as a British journalist, and for his clear writing, Poole deserves five stars for Red Zone

David C N Swanson
5.0 out of 5 stars Possibly Best Iraq War Book Yet
Reviewed in the United States on February 16, 2009
I've only read a fraction of the books written on the war/occupation of Iraq, and even those are a large pile. It's tough to choose the best one, but one of the most readable and informative has got to be this one. This is also perhaps the book most likely to engage war supporters and make them think without being didactic and without pulling any punches.

The title is accurate enough, but the book describes bloody and less bloody periods, and takes the reader all around Iraq, to neighboring countries, and to England. We see the war from the perspective of journalists, soldiers, and Iraqis from all sorts of backgrounds. We gain a better understanding of five years' worth of headlines as major events are incorporated in a tale of social changes and the experiences of individual characters.

Truly a brilliantly done book by a long-time reporter for the British newspaper, the Telegraph. Sadly, the Telegraph got a new editor and began insisting on pro-war propaganda. And sadly for us if not him, Poole settled down in England and started a family. So, the war goes on, short one reporter. And it didn't have many to spare.
Read more
4 people found this helpful
Helpful
Comment Report abuse

David Page.
5.0 out of 5 stars Once started, a very hard book to stop reading.!
Reviewed in the United Kingdom on August 31, 2018
Verified Purchase
If ever there has been a book written that will alter your view of the "Iraq war", then this one is surely it. Yet more reason for "Blair" to hang his head in shame for taking the U.K's soldiers into this quaqmire.!!!
Read more
Helpful
Sending feedback...
Thank you for your feedback.
Sorry, we failed to record your vote. Please try again
Report abuse

ray
5.0 out of 5 stars Good read
Reviewed in the United Kingdom on May 20, 2017
Verified Purchase
A very good read and quite sad as it highlights the terrible time suffered by much of the population of Iraq.
Read more
Helpful
Sending feedback...
Thank you for your feedback.
Sorry, we failed to record your vote. Please try again
Report abuse