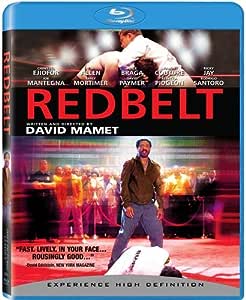 Secure transaction
Your transaction is secure
We work hard to protect your security and privacy. Our payment security system encrypts your information during transmission. We don’t share your credit card details with third-party sellers, and we don’t sell your information to others. Learn more
Details
Ships from
Amazon.com
Sold by
Amazon.com
Redbelt+%28++BD+Live%29+%5BBlu-... has been added to your Cart
New & Used (15) from
$6.23 + $3.99 shipping

Set on the westside of the Los Angeles fight world, a scene inhabited by bouncers, cagefighters, cops and special forces types REDBELT is the story of Mike Terry(Chiwetel Ejiofor), a Jiu-jitsu master who has avoided the prize fighting circuit, choosing to instead pursue a life of honor and education by operating a self-defense studio with a samurai's code. Terry and his wife Sondra (Sonia Braga) struggle to keep the business running to make ends meet. An accident on a dark, rainy night, between an off duty officer (Max Martini) and a distraught laywer (Emily Mortimer) puts in motion a series of events that will change Terry's life dramatically introducing him to a world of promoters (Ricky Jay, Joe Mantegna) and movie star Chet Frank (Tim Allen). In order to pay off his debts and regain his honor, Terry must step into the ring for the first time in his life.

The martial arts themselves are done quite well, so when they are presented, you can't help but watch. Very wonderful film.
Read more
3 people found this helpful
Helpful
Report abuse

Trevor
5.0 out of 5 stars Mamet at his best
Reviewed in the United States on May 27, 2019
Verified Purchase
While some Mamet scripts require a lot of the movie goer, Redbelt has a simple story not about martial arts but about truth, integrity and corrupt Hollywood.
I had the DVD and the Blu-ray is an upgrade in picture quality. Get it while you can.
Read more
Helpful
Report abuse

Mamet movies I've seen (written and/or directed), as just now revealed to me by IMDB:
The Winslow Boy
Ronin (I had no idea!)
Wag the Dog
The Edge (!)
Glengarry Glen Ross
The Untouchables
The Verdict

So, as it turns out, I've liked most of the movies of his I've seen. In fact, all of the above rank at least in my "hey that was pretty ok" level. Ronin I love.

Redbelt ranks similarly to Ronin, helped by it's main character's adherence to a samurai-like code. Mike Terry is an honorable man running a small jui-jutsu dojo in LA. He has a dedicated student, a police officer, in whom he has instilled the same sense of honor. His wife runs a textile/clothing design business and helps him stay afloat. He is well-known and respected within the martial arts world, but has never found great financial success, and refuses to compete. A series of fortuitous and tragic events and people test his code of honor to the furthest degree.

The movie is carried equally by its writing and acting. It's a fight movie, and you figure the quiet master will have to fight in the end, but Mamet's screenplay takes interesting routes to get there. The time spent with Mike Terry (the truly great Chiwetel Ejiofor) makes the choices and conclusions feeled earned rather than obvious. Chiwetel is supported by a uniformly excellent cast, including Tim Allen in a serious role, Emily Mortimer, Joe "Fat Tony" Mantegna, and Max Martini (who does a lot with a relatively small amount of screen time as the cop student).

I read some reviews that complained about the ending and some of the story's loose ends not being tied up, but I think each of those elements was consistent with the way the story was told and needn't have been elaborated on. (One example: it is hinted that Terry has a military past and has overcome an alcohol addiction, but, while never elaborated on, we see the sort of man it has made Terry, and these hints do strengthen the character without needing to be spelled out.)

As far as the visuals go, the beginning really stood out to me. Very moody noir-ish stuff in the rain. The rest of the cinematography doesn't draw attention to itself (to me, anyway), but the direction allows many lingering shots that afforded some great introspective work from Chiwetel.

I recommend it.
Read more
One person found this helpful
Helpful
Report abuse

The Dragon Wind Ninja
4.0 out of 5 stars RED BELT
Reviewed in the United States on June 8, 2016
Verified Purchase
I gave this 4 stars it's a pretty good movie and looks great in H.D. I would have gave it 31/2 stars because there's not a lot of action but descent story the picture looks good I bought this because I remember watching it a long time ago and it's in with my collection now now on to another 2 movies if I can get to watch them now or not
Read more
Helpful
Report abuse

ronny
4.0 out of 5 stars Love this movie
Reviewed in the United States on July 11, 2017
Verified Purchase
Loved this movie realistic fight scenes, and believable characters. It's hard to find movies like this, must watch for any BJJ or jiu jitsu fans
Read more
Helpful
Report abuse

Hannah S
5.0 out of 5 stars Loved it
Reviewed in the United States on February 22, 2014
Verified Purchase
Fantastic martial arts film with shades of Rocky, The Last Dragon and a bit of a Kurosawa thrown in. Great acting. Serious martial arts movie for a change albeit with a weird plot.
Read more
Helpful
Report abuse