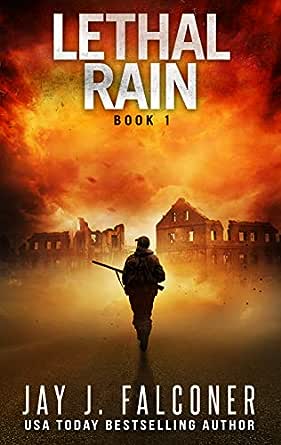 You've subscribed to A Post-Apocalyptic Survival Thriller! We will preorder your items within 24 hours of when they become available. When new books are released, we'll charge your default payment method for the lowest price available during the pre-order period.
Update your device or payment method, cancel individual pre-orders or your subscription at
Your Memberships & Subscriptions
There was an error. We were unable to process your subscription due to an error. Please refresh and try again. 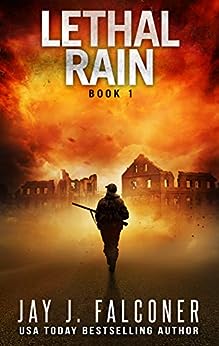 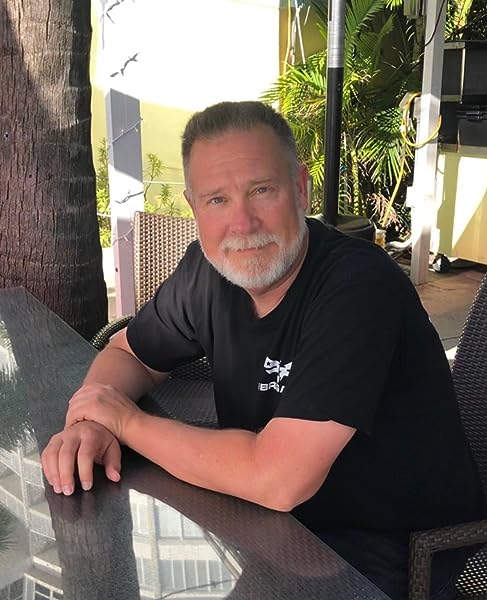 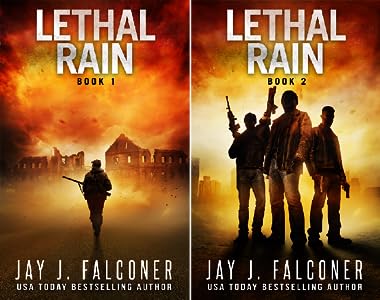 "Solid action... An intelligence expert teams up with survivalists when a bizarre weather event prefaces a plan to stir up chaos among American citizens in this techno-thriller. Falconer employs his near-future setting to great effect." ~Kirkus Book Reviews

"Full of intrigue and twists, REDFALL: FIGHT FOR SURVIVAL is an enthralling, fast-paced take on the apocalypse story. REDFALL: FIGHT FOR SURVIVAL is a novel that hits the ground running and doesn't let up. Falconer piles on the action-packed conflict, delivering one twist after another, dropping obstacles onto characters who are left wondering if they'll ever dig their way out. Multiple storylines fill this creative yet miserable dystopian America, from the quirky preppers of the compound Pandora to militant groups, top-tier government officials, and slimy businessmen. Falconer's precise timing between transitions from one subplot to another makes the action flow like a TV drama, unfolding layer by layer while the pieces start to come together." ~IndieReader 4.5 Stars

"Redfall: Fight for Survival is an awesome action and dystopian tale that is dark, gritty, and scary because it could be so real. Falconer is a master writer who excels at his craft. I loved the characters in this story and the mystery behind the rain. I couldn't put the book down until I knew how it ended." ~JJ Phillips, Reviewer for Readers' Favorite Book Reviews. 5 Stars.

"Redfall: Fight for Survival is a really well-written story that crosses so many genres that it is sure to please everyone! It is so much more than a sci fi story. It has mystery and suspense, action and sorrow. There are corrupt governments, secrets, lies, death, fights, and of course, action! Once this story starts it never stops, which is a great way to read a story like this. Falconer is incredibly talented at writing this world and his characters. I felt like they were real people, struggling with real issues, and I was so immersed in the world that I worried for these characters like they were my own friends." ~Renee Taylor, Readers' Favorite Book Reviews. 5 Stars.
"I'm absolutely hooked on the characters and what's going to happen to them next. This isn't your normal dystopian sci-fi read. I give it 5/5!" ~Elizabeth Barbarick, Reviewer for Stuffed Shelves. 5 Stars.

"This is the most unique end-of-the-world story I have ever read." ML Banner, #1 Best-Selling author of the Stone Age Series. 5 Stars.

When he's not busy working on his next project, he's out training, shooting, hunting, or preparing for whatever comes next.

You can find more information about this author and his books at JayFalconer.com.

4.1 out of 5 stars
4.1 out of 5
148 global ratings
How are ratings calculated?
To calculate the overall star rating and percentage breakdown by star, we don’t use a simple average. Instead, our system considers things like how recent a review is and if the reviewer bought the item on Amazon. It also analyzes reviews to verify trustworthiness.
Top reviews

Shirley Sexton
5.0 out of 5 stars Great book
Reviewed in the United States on April 11, 2017
Verified Purchase
Fast paced and gripping. This book keeps you interested from the first page. I can't wait for the next one.
Read more
33 people found this helpful
Helpful
Comment Report abuse

Bill Stiver
5.0 out of 5 stars Great book.
Reviewed in the United States on April 8, 2017
Verified Purchase
Can't wait to read the next one. An unusual story line that has me hooked. I recommend it for those that like something different from most end time books.
Read more
29 people found this helpful
Helpful
Comment Report abuse

Grady HarpTop Contributor: Children's Books
HALL OF FAMETOP 50 REVIEWER
5.0 out of 5 stars ‘StarBright Networks is proud to present to you, live, this afternoon, the execution of a vile, despicable criminal.’
Reviewed in the United States on February 22, 2016
Verified Purchase
Arizona author Jay J. Falconer not only writes novels, but also serves as a publisher, blogger, editor, engineer and Sci-Fi junkie! He is a retired college professor who now, in addition to writing his NARROWS OF TIME and AMERICAN PREPPER science fiction series, edits and writes for Incursion Magazine. On his website he shares some personal thoughts about his work that are helpful in reading his books: `My writing style certainly doesn't appeal to everyone, especially those who prefer cookie-cutter science fiction that's been done to death. Those types of stories bore me and the Internet is littered with them. I shoot for something unpredictable, fun, and maybe a little shocking when I begin a new project. My goal is to entertain you at every level. To surprise you. To make you gasp out loud. To leave you wanting more from the characters and from the series. If that means that good characters have to die a horrible, twisted death, then so be it. My characters are flawed -- they drink -- they curse -- they ogle members of the opposite sex -- they make mistakes, then try to cover them up -- in other words, they're real people. My target reader is someone who appreciates an author who's willing to take chances and who never takes the easy way out with a scene. If you're looking for a great big bow on top of an ending that you can see coming from ten miles away, then maybe my books aren't for you. However, if you're craving something new and different that will shock and stimulate your senses, then reward yourself and give my stories a read.'

How many novels about man’s end are we able to absorb – so terrifying a concept in the hands of most storytellers since the days of mythology? Tune in to the mind and scriptive talent of Jay Falconer and discover. In his various series he makes ‘the end’ so palpably real that it makes opening the morning door to get the paper threatening. Jay has that ability to distill his own narrative so well that any attempts from a reviewer diminish. As he outlines it, ‘Former Special Ops and survivalist Simon Redfall has lost everything: his wife, his fortune, and his future. Despite being hunted by angry mobs and his own bankrupt government, Simon arrives in Washington, DC to attend the first ever, pay-per-view execution of someone he loves. Then red storm clouds appear and begin to spread their potentially toxic rain across the planet. The mysterious weather phenomenon grounds all travelers, knocks out communications, and threatens to take down the grid, sending civilization back to the Stone Age. As society tumbles into chaos, Simon joins a group of like-minded preppers to unlock the secrets behind a terrifying global conspiracy. What he and his band of freedom fighters soon learn will put their lives at risk, and the lives of everyone else on the planet. For humanity, time is running out . . . When the red rain stops falling, it will be too late to stop what’s coming next.’ Point made.

With a stone face Jay opens his book just so: ‘Simon Redfall kept his head down and eyes low as he took a seat in the general admission section of the sold-out National Execution Center in Washington, DC. If it weren’t for his long hair and unruly beard, certainly one of the twenty-thousand blood-starved fans would have recognized him before the start of the most eagerly anticipated event in pay-per-view history. A sprawling stage with a lavish red curtain was the focal point of the venue and built specifically for the government’s new Execution Channel, dubbed EC1. The arena featured sweeping sight lines to give those in attendance a perfect view of the dying criminal who would soon be unveiled for the world to see. Every detail of the inaugural event had been planned and refined to ensure wide, cross-section appeal and massively high broadcast ratings. Nothing was left to chance, not when the most hated mass murderer in modern history was about to draw her last breath with all of humanity watching and cheering.’

fausto marmol
5.0 out of 5 stars different from the typical books of apocalypse.
Reviewed in the United States on March 9, 2016
Verified Purchase
This book presents potential future in which happen a series of events and catastrophes, which at first appear to be caused by global warming, but then discovers it is not of natural origin. As the title indicates this book is about survival and preppers. The more the story unfolds more inexplicable events appear, as a toxic red rain, which affects all over the world.
In this book there is a lot of fiction, action, intrigue full of interesting things. Among the things I didn't liked was the length, is not very long and I did not feel much fear. But beyond that it's perfect, I can not wait to read the second book.
I liked the characters that the author introduces the history, a lot of diversity, change perspectives, which makes the reader appreciate better what happens in such a catastrophe. It's the apocalypse? it's the end of the world? Actually those are questions that the characters make themself at all times.
Read more
Helpful
Comment Report abuse
See all reviews

Dave Bell
1.0 out of 5 stars Don’t bother
Reviewed in the United Kingdom on September 10, 2018
Verified Purchase
I know with a series you expect the story to continue but there is usually an end to one aspect of the story. This stops mid story mid action actually. Maybe an American way to get you to buy more but I found it very frustrating. I won’t be buying more. Not impressed with story either.
Read more
Report abuse

baz362
5.0 out of 5 stars Good book
Reviewed in the United Kingdom on July 31, 2017
Verified Purchase
Very good read was action from start to finish could not put it its hope the next episode is as good.
Read more
Report abuse

A. White
4.0 out of 5 stars Four Stars
Reviewed in the United Kingdom on May 4, 2016
Verified Purchase
Easy and quick read, I enjoyed it. Currently reading the second book.
Read more
Report abuse

jet set
5.0 out of 5 stars Gripping
Reviewed in the United Kingdom on April 12, 2016
Verified Purchase
The book keeps you guessing at the plot but it never gives any thing away, a really good read so keep the red falls coming please
Read more
Report abuse
See all reviews