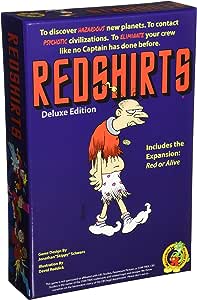 In Redshirts - which is based on a television franchise never to be named for legal reasons - players take on the role of Starship Captains, with a random assortment of Redshirts, which are junior level crewmen. The goal of the game is to be the first player to eliminate all of his own Redshirts. Each player has a hand of cards that allows him to assign missions, issue equipment, travel to exotic locations, or use temporary abilities. Players frequently wind up with more cards than they can hold, which forces them to make strategic decisions about how to proceed. Each Redshirt has its own combination of abilities and powers, and the players must find a way to match their crew up against missions where they cannot succeed. Other players "help" by offering the doomed Redshirt additional aid in an attempt to keep it alive.

3.3 out of 5 stars
3.3 out of 5
17 customer ratings
How does Amazon calculate star ratings?
Amazon calculates a product’s star ratings based on a machine learned model instead of a raw data average. The model takes into account factors including the age of a rating, whether the ratings are from verified purchasers, and factors that establish reviewer trustworthiness.

J.D.K.
3.0 out of 5 stars Great concept, terrible instruction.
Reviewed in the United States on August 15, 2014
Verified Purchase
I ordered Redshirts Deluxe for my wife as a gift for her birthday. She had previously seen the game at a local game shop and shown interest in it. I shared her interest, being captain of a starship and intentionally send your expendable crew members to their inevitable demise is a comical concept. Making it so you must work at 'sabotaging' your rival captains so their crew member's mission are successful make it a rather entertaining game and the illustration certainly adds to the atmosphere.

The only place Redshirts really falls apart is the instruction. It is poorly written and could use a good amount of organization. It is especially apparent when there is a section of the manual dedicated to clarification of previously described rules and actions and those clarifications still need clarification. After reading the manual several times and watching a demonstration video posted by the game's creator, my wife and I decided to simply 'wing it' and play the game even though it still wasn't clear how some parts of the game were to function and flow. It is sad to know that the rules included in the deluxe edition are a revised set that supposedly have 'cleared up' a number of issues that the original rules were failed at.

Overall the game is entertaining once you get beyond the terrible writing of the game rules. It seems that the rules are sharing the spirit of the game and you, the player, are the embodiment of the redshirt, given insufficient information to understand and complete your mission (the game).

Mikie McAllister
2.0 out of 5 stars Don't be sucked into the concept of Star Trek hillarity
Reviewed in the United States on May 15, 2016
Verified Purchase
First, the instructions are not hard to understand, BUT they do a terrible job of clearing up questions you may have or that may arise, OF WHICH THERE WILL BE SOME. There are places where the instructions contradict themselves where it counts. During the "Modify the Attempt" phase of mission execution (the most dynamic part of the game and how you kill Redshirts), the instructions state that "everyone has a chance to play a single card and/or use one of their 'Redshirts special abilities. They may choose to pass if they do not wish to modify the attempt further. This continues until no player wants to modify the Mission any further." This instruction is poorly written and open to interpretation. Additionally, the instructions use bullets when the cards use icons for the same instruction. Poor consistency. Also, the creators should have "splurged: on 1 or 2 extra pages, then gotten independent reviews from multiple sources.

Second, the card design (logistics not aesthetic) is poorly laid out. In favor of putting a big picture on the card, the card text instructions are separated allowing the interpretation that several options are possible when in fact all the text on certain cards is all one instruction. This might seem like a minor problem, however it could be avoided by placing all same option text together as is done on other cards in the game. Low marks for design continuity. Additionally, there are cards that have plenty of room to finish the text instruction but don't like Mission cards that say "Draw one..." WHAT??? It means a card and NOT another Redshirt, but you have to read this in the instruction. Lazy, and deliberately unhelpful.

THIRD, Conceptually, some of the card types have awkward usage. Location cards may be played 'whenever apparently' (not explicitly stated as only on your turn), even when in the middle of a mission (awkward usage conceptually). Admittedly, I specifically have a problem with this and I don't believe it is a universal problem with others, I just feel the card type is conceptually awkward, not mechanically.

FOURTH, don't got to the FAQ for help, It's a joke (literally I think), unless you want to know where to buy it!!

The concept is good, and the established universe will ensure a decent return (it did with me), but getting bogged down in playing the game will DRAMATICALLY affect the overall enjoyment (but with respect to other reviews, it won't necessarily extinguish it). PLAY SOMEONE ELSE'S FIRST AND DON'T BUY UNTIL YOU DO!!!!! Unfortunately, the game feels like the creators were so excited about the concept, they were blinded when exercising objectivity.
Read more
One person found this helpful
Helpful
Comment Report abuse

DK
4.0 out of 5 stars Funny, takes a few plays to get the hang of it.
Reviewed in the United States on February 2, 2014
Verified Purchase
The idea of the game is lots of fun, there are lots of silly puns and cards that a star trek fan will really get a kick out of. The game play is a bit cumbersome the first few rounds, not that its tricky, it is more about getting the trumping of cards in order to win the game. But for me and my friends the fun of the game outweighs winning, If your looking at the game for solely strong game mechanics, well, it might not be for you, but if your more into the funny cards and can use your imagination to see the silly situations your putting your "away team" in, it can be really funny and a kick to play. I hope that helps :)
Read more
Helpful
Comment Report abuse

Consumer
4.0 out of 5 stars Backstabbing Delight
Reviewed in the United States on March 9, 2014
Verified Purchase
This game is very similar to Munchkin, but is more balanced.

Rather than one player propelling themselves to victory, with nobody else ever having a chance to stop them, this game allows players to succeed, but keeps everyone on an even keel, ensuring that the battle is fair up until the last minute.

It doesn't have as much versatility as Munchkin, though, and the rules are very different between the Redshirts, and Redshirts Deluxe Edition. Redshirts is more of a balanced game, where the players ahead are inhibited from winning, making the game more balanced, whereas Redshirts Deluxe keeps everyone even, regardless of how much power they actually have.
Read more
3 people found this helpful
Helpful
Comment Report abuse

rndy giles
5.0 out of 5 stars Red Shirts is a fun game to play
Reviewed in the United States on June 12, 2015
Verified Purchase
Fun game to play....makes you feel as though you are the captain and killing redshirts is your job!!! Game is great can't wait for the upcoming expansions to make it even better!!!! As a fan of Munchkin, Redshirts keeps you on your toes and always looking for a way to get rid of your team and make your friends keep or gain new members
Read more
Helpful
Comment Report abuse

Repeat Customer; WA, USA
5.0 out of 5 stars Death to the red shirts
Reviewed in the United States on June 23, 2018
Verified Purchase
Favorite game. Make sure you understand the rules. Lol. Fighting will occur.
Read more
Helpful
Comment Report abuse
See all reviews from the United States

Rob Baxter
1.0 out of 5 stars Terribly confusing game
Reviewed in Canada on November 18, 2014
Verified Purchase
Terribly confusing game. Rules are not clear enough. Tried playing it about 3 times and gave up. Avoid this game.
Read more
Helpful
Sending feedback...
Thank you for your feedback.
Sorry, we failed to record your vote. Please try again
Report abuse