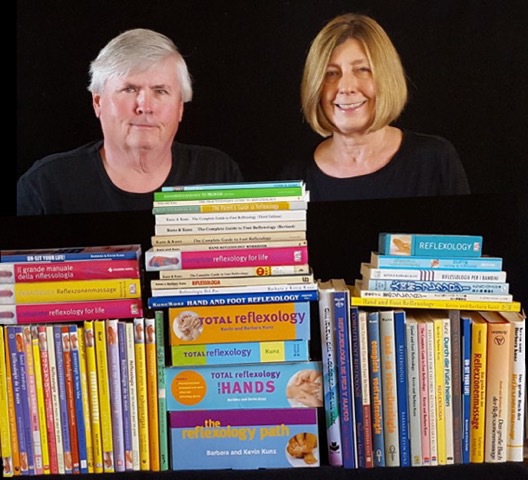 by Barbara Kunz (Author), Kevin Kunz (Author)
4.7 out of 5 stars 603 ratings
See all formats and editions
Sorry, there was a problem loading this page. Try again.

Reflexology is a global best-seller by two of the most-recognized authorities on this holistic therapy. This comprehensive yet approachable guide explains how reflexology works: by applying pressure to "reflex" points on the hands and feet, you can help to stimulate the body's natural powers of self-healing.

Reflexology features more than 100 step-by-step techniques and treatment sequences, detailed foot and hand reflex charts, and a directory of treatment for 30 common ailments, from back pain to constipation, arthritis to high blood pressure. Visualizations and meditations are suggested throughout, to enhance the healing treatments.

As the first fully-illustrated step-by-step guide, Reflexology remains one of the most trusted resources on this ancient art.

Kevin and Barbara Kunz are internationally recognized authorities in the field of reflexology. They have researched, taught, practiced and documented reflexology for more than 30 years. Barbara and Kevin Kunz have written 17 reflexology books available in 57 foreign editions and 19 languages.

Anonymous
5.0 out of 5 stars Good info
Reviewed in the United States 🇺🇸 on June 12, 2022
Verified Purchase
I ordered this book to get a head start prior to starting my reflexology program.
Read more
One person found this helpful
Helpful
Report abuse

Stan the Man
5.0 out of 5 stars Taking the power of healing in your own hands.
Reviewed in the United States 🇺🇸 on March 23, 2022
Verified Purchase
The illustrations are clear and easy to follow. The natural healing powers that are already within us that just need to be activated are made simple that anyone can do by going through the pages of this book. Outstanding!
Read more
4 people found this helpful
Helpful
Report abuse

Resa
5.0 out of 5 stars Clear educational tool for reflexology
Reviewed in the United States 🇺🇸 on February 8, 2022
Verified Purchase
This is an excellent guide to reflexology! The detailed, color photographs with clear instructions provide an informative educational tool. If you’re deciding between reflexology book options, choose this one!
Read more
3 people found this helpful
Helpful
Report abuse

Jem
5.0 out of 5 stars Very detailed illustration and explanation
Reviewed in the United States 🇺🇸 on March 21, 2013
Verified Purchase
If you have any interest in reflexology, I highly recommend this book. The papers are very high quality and thick, therefore all the photos are crispy clear. The book explains in such details how to massage each part of hands and feet and also has a seperate section just for how to massage elderly people. I have elderly in-laws and like to care of elderly people, so visit them often. Just by giving some massage to their hands and feet, they're so happy physically and mentally.
If you're in hospice care or any kind of care for the elderly, please learn these techniques. There can be no harm done unlike acupunctures or Shiatsu massage. The book consists of 80% of photos(NOT cheesy illustrations), which should be for a book to explain massages and parts of hands/feet. I'm an Asian and I know the power of reflexology. Each part of our hands and feet are connected to our inner and outer parts of body. By touching a correct part of your hands and feet, you can minimize or even completely heal pain and discomfort of the body. Discover the power of reflexology.

Rachel C.
4.0 out of 5 stars A good book to put into your holistic healthcare collection
Reviewed in the United States 🇺🇸 on January 17, 2018
Verified Purchase
Am I doing it right??? This is the question I asked myself every time I used this book. I worked on two people following the guidance presented in the book. The protocol worked on one, but not the other, making me wonder if maybe I just got lucky. Even though I questioned myself while using the book, the information is presented very well with lots of pictures to help guide you through the directions. If you lean towards a holistic approach to your health this is a good book to have in your collection.
Read more
4 people found this helpful
Helpful
Report abuse

Destiny DuShane
5.0 out of 5 stars Great Reference Book
Reviewed in the United States 🇺🇸 on July 13, 2021
Verified Purchase
This book has so much information in it. So many things to learn and this book has it. It guides you through each area you want to cover. So helpful.
Read more
Helpful
Report abuse

Andrea murtha
5.0 out of 5 stars Awesome book
Reviewed in the United States 🇺🇸 on June 20, 2021
Verified Purchase
I got more info than I bargained for.
Def recommend this book!
The details & pictures are awesome.
I’m a visual learner so it’s def a great tool for me to have
Read more
2 people found this helpful
Helpful
Report abuse
See all reviews

K. Senior
5.0 out of 5 stars Worth 5 stars for this book.
Reviewed in the United Kingdom 🇬🇧 on September 11, 2020
Verified Purchase
Purchased this book as I’m quite interested in reflexology and I’m so happy with the book. Very informative and also very good with illustration as well as photos so I give this five stars. Can’t wait to get reading it as well as practice some of the methods on friends or family. ⭐️⭐️⭐️⭐️⭐️
Read more

K. Senior
5.0 out of 5 stars Worth 5 stars for this book.
Reviewed in the United Kingdom 🇬🇧 on September 11, 2020
Purchased this book as I’m quite interested in reflexology and I’m so happy with the book. Very informative and also very good with illustration as well as photos so I give this five stars. Can’t wait to get reading it as well as practice some of the methods on friends or family. ⭐️⭐️⭐️⭐️⭐️
Images in this review

Jo Lound
5.0 out of 5 stars Well illustrated informal book.
Reviewed in the United Kingdom 🇬🇧 on September 13, 2019
Verified Purchase
D & K are great at making their books easy to follow with attractive illustrations. I have been having reflexology for a year and am keen to find out more about it but have no intention of trying it myself. Would definitely recommend this book.
Read more
Report abuse

Jay
5.0 out of 5 stars reflexology book
Reviewed in the United Kingdom 🇬🇧 on September 4, 2018
Verified Purchase
I love this book as it has every thing I need to learn with. There's the history of reflexology, how it works, foot and hand maps of reflexology, benefits of reflexology, taking care of hands and feet, reflexology sessions and targets health concerns.
Read more
Report abuse

eddie rogers
5.0 out of 5 stars Great beginners guide to reflexology.
Reviewed in the United Kingdom 🇬🇧 on November 29, 2016
Verified Purchase
I am a fan of DK books as the explanation and style of writing is very easy to follow. This book is no
different. It is well written with clear instructions and great quality images. Would highly recommend
this book for anyone who is interested in learning about reflexology.

Charly781
5.0 out of 5 stars very good reference
Reviewed in the United Kingdom 🇬🇧 on January 10, 2014
Verified Purchase
I read this through quite quickly when I first got it, but I find I frequently refer to it, and keep it near where I sit in the living room as it is handy to check up on things. easy to follow and understand
Read more
3 people found this helpful
Report abuse
See all reviews