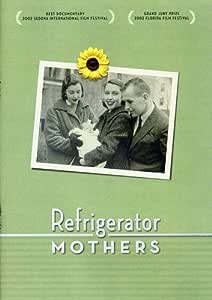 David E. Simpson (Director, Editor, Producer) Rated:
NR
Format: DVD
5.0 out of 5 stars 5 ratings
Available at a lower price from other sellers that may not offer free Prime shipping.

In America during the 1950s and 1960s, the cultural assumption was that a woman's most important contribution to society was her ability to raise happy, well-adjusted children. But, for a mother whose child was diagnosed with autism, her life's purpose tu

An incredibly moving video that illustrates the history of autism through the life experiences and poignant stories of seven pioneering women and their children. Anyone involved in the life of an individual with an autism spectrum disorder must see this video. Quite simply, remarkable! --Dr. Cathy Pratt, Board of Directors, Autism Society of America

Erik Gfesser
VINE VOICE
5.0 out of 5 stars Recommended to anyone touched by autism
Reviewed in the United States on March 28, 2012
An entire generation of American mothers whose children were diagnosed with autism in the 1950s and 1960s were labeled "refrigerator mothers", because as the second of seven mothers portrayed in this documentary perhaps best explains in her own words, it is "the label that you get stuck [with] when you were trying to find someone to help you. A refrigerator mother as defined by Bettelheim and the Freudian child psychologists was someone who held back from interacting, and loving a child. Someone who is remote. Someone who wasn't there for the child. Someone who wasn't giving. The child turns into an autistic person because the cold, rejecting refrigerator mother's not able to love and care for that child in the warm way that a child needs."

And who was Bettelheim? This second mother continues by saying that she "can remember going into Dr. Eger's office. And he said, 'Why are you here?' And I said, 'My child needs help. We need help. We need to be able to help our child. That's what we want from you.' And that's what we didn't get. Instead of getting help, we got Bruno Bettelheim." Bettelheim presented himself as an expert in the care and treatment of autistic children. He had been in an internment camp briefly at Dachau. He wrote a book that said his experience at Dachau paralleled the experience of autistic children, whose parents were like prison camp guards. I had recently read about Bettelheim in "A History of Autism: Conversations with the Pioneers", by Adam Feinstein, and the footage of Bettelheim that this documentary provides at several points helped me understand from whence we came in this field.

In one of the scenes of this documentary that in my opinion shows best one of the tragic outcomes of Bettelheim's worldview, which Bettelheim biographer Richard Pollak perhaps sums up best here as "blaming the parents was Bettelheim's modus operandi", footage of Bettelheim walks through his treatment facility during a slide presentation. In showing the entryway to this facility, Bettelheim mentions that parents were not permitted to go beyond that point, because parents are the cause of autism. Speaking to another slide, Bettelheim briefly presents a lawn display at the facility representative of a mother called "The Lady", which in his words the children were encouraged to "step on it, walk on it, lie on it, kick it".

After the segment of this film for the third mother, Robert Coles, M.D., Professor of Psychiatry at Harvard Medical School, in recalling his work in pediatrics, and later child psychiatry, he remembered a social worker commenting, "Look at some of the mothers coming in here. Look at them. They feel overwhelmed by the experience. Their heads are bowed. They feel hurt. They come here feeling they are going to be judged, and we are the ones who are going to judge them." He remembered thinking, "Why is she saying this? What is her problem that would make her talk like this? This is a closed totalitarian system. If you have any reservations, or any doubts, or second thoughts, then the problem is yours and we've got to bring you into the system of judgement - at times even accusations. This is not very nice."

A closed totalitarian system. As the father of a child with autism, even though I can only imagine what it must have been like for the mothers profiled here, and many like them, to be treated in such a manner, in many ways there is still a closed totalitarian system in the field of autism, although now there exist multiple competing systems against this backdrop. We are far from having all the answers, but at least it is now generally recognized that biomedical approaches can be used to treat autism, and that it is not a psychological disorder. Even given all of the "garbage" with which we have had to contend, summoning the word elegantly used by the seventh mother in this documentary, at least there is a glimmer of hope that we are arising from the Dark Ages in this field.

The sixth mother here provides one of the most moving accounts of the experience she had with her son. "I had always wanted children, but I never thought I was gonna have 'em, so when I became pregnant with Stephen, you wouldda thought it was the Second Coming of Christ." She recalled being recommended some books about autism at the library. She had not heard about autism before, but the characteristics of autism she read in the books seemed to describe her son, so the next time she was at her physician's office, she asked if he thought her son had autism. A whole team from the University of Illinois actually ended up evaluating her son. "They said 'No - it may be an emotional disturbance, but it's not autism.' We did not fit the mold. We did not fit the classic mold for autism, which is white, upper middle class, and very, very, bright."

She continues by saying, "According to my doctors, my son could not be autistic. I was not white, and it was assumed I was not educated. Therefore he was labeled emotionally disturbed. [Here's] a child with a disability that you recognize, and they said, 'You can't be that.' You can't even be a refrigerator mother. The irony of it all."
Read more
4 people found this helpful
Helpful
Comment Report abuse
See all reviews