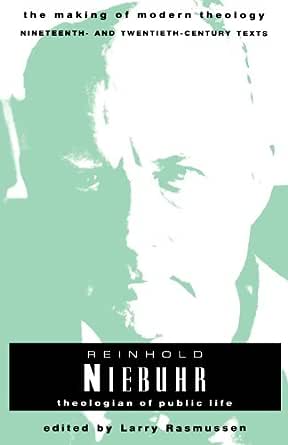 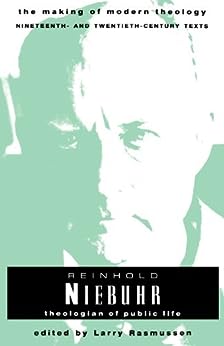 4.5 out of 5 stars
4.5 out of 5
6 customer ratings
How does Amazon calculate star ratings?
Amazon calculates a product’s star ratings based on a machine learned model instead of a raw data average. The model takes into account factors including the age of a rating, whether the ratings are from verified purchasers, and factors that establish reviewer trustworthiness.
Top Reviews

Tom K.
4.0 out of 5 stars Thoroughly Relevant Today
Reviewed in the United States on March 19, 2010
The book contains historical background and excerpts on 10 subjects. It is always stimulating, but often difficult to fully digest. Therein lies the value. Niebuhr does not fit nicely into a slot. Fully Christian, fully academic, fully versed in liberalism and socialism. He provides "both/and" answers to the important questions of personal and public life, based upon his and the world's experiences from the 1910's through the late 1960's.

In the end, he is a defender of the authority of reformed Protestant Christianity and its vital relevance to world, national and community affairs. He persuasively argues that man's original sin and tendency to become too self-centered (hubris or sensuality) can only be solved through grace and contrition. He elevates this to the community level and concludes that there is eventual hope, but that the higher social orders are more subject to failure. He criticizes progressives, liberals, communists, pacificists and others who do not see the limits of human created solutions. He accepts the need for personal engagement in politics to provide a counterwieght to the tendency of elites/ruling groups to overextend their reach.

Niebuhr's writing provides a pragmatic framework for considering the role which the US and the west should take in the current world. As Niebuhr wrote "The world community, toward which all historical forces seem to be driving us, is mankind's final possibility and impossibility." In spite of the challenges, he would encourage men of good will to engage in shaping the world community at this time.

FrKurt Messick
HALL OF FAME
5.0 out of 5 stars Words of a prophet
Reviewed in the United States on June 19, 2004
This volume on the works of Reinhold Niebuhr is part of a series by Fortress Press entitled 'the Making of Modern Theology: Nineteenth and Twentieth Century Texts'. Each of the volumes in the series focuses upon one particular theologian of note. These volumes are of use to students, seminarians, ministers and other readers interested in the development of theological ideas in the modern and postmodern world. Each volume is a reader of key texts from the theologian highlighted - the text entries are annotated a bit by the editors, and the editor of each volume provides an introduction setting the general stage for context and understanding.
Editor Larry Rasmussen describes Niebuhr as being a theologian of public life. According to Rasmussen, Niebuhr is second to none practical theological influence in twentieth century North America; Martin Luther King Jr. is perhaps the only better known preacher over the time, and shares much with Niebuhr in terms of addressing social concerns through the gospel and theological discipline. Niebuhr had a prophetic voice -- never shy at expressing his beliefs and opinions regardless of the lack of popularity they might have.
Niebuhr shared acclaim with his brother, H. Richard Niebuhr, and Paul Tillich as premier theologians of the mid-twentieth century. Niebuhr himself often dismissed the idea of himself as a theologian -- he did not work out a systematic framework of theology like many of his predecessors and contemporaries. While his many writings do show a deep, mature and consistent theology, his work was always more geared toward the public -- he avoided theological terminology (and particularly resisted the theologians' habit of inventing his own terminology) so that his work would be accessible to the general public, and evoke a response. Niebuhr would be more likely to describe himself as a Christian ethicist -- the intersection of ethics and theology in Niebuhr was profound and permeated his teaching, his writing, and his action in the world.
Niebuhr spent time as a pastor, writing much of this experience in the book 'Leaves from the Notebook of an Untamed Cynic'. Niebuhr's tendency toward truth-telling would get him into trouble at times; he wrote that he entered parish ministry reluctantly, and he left it reluctantly. After his tenure as a pastor, he became an academic for the remainder of his career, finding his community and calling both at Union Theological Seminary, one of the more liberal seminaries of the time interested in social justice issues. Niebuhr's career at Union was an unlikely one -- unlike most academics, he did not possess a doctorate degree, nor was he considered likely to produce much in terms of writing (a vast underestimation if ever there was one). Union Theological Seminary was a place of international reputation -- German theologian Dietrich Bonhoeffer spent time there, forming a significant relationship with Niebuhr.
Rasmussen's selection of writings comes from books of Niebuhr's own, chapters he wrote for others, journal articles, and sermons. He arranges these topically, including rather standard theological topics such as 'Grace and Sin', 'Nature and Destiny', 'Justice and Love', but also develops some publically-oriented topics such as 'Morality and Power', 'Theological Ideas, Political and Social Theory', and topics that deal with historical and eschatological issues.
Each volume in this series also has a selected bibliography section -- this one for Niebuhr is divided into major single works by Niebuhr (primary sources), collections of sermons and shorter works by Niebuhr, and secondary sources about Niebuhr's religious thought. The book is well indexed, with indexes for subjects and names, as well as organisations and publications. This is a very good book for scholarship. It is entirely appropriate for Larry Rasmussen to be the editor for this volume, given his position at professor at Union Theological Seminary in New York is the Rienhold Niebuhr chair.
Read more
33 people found this helpful
Helpful
Comment Report abuse
See all reviews from the United States

Vernster
4.0 out of 5 stars Received
Reviewed in Canada on July 23, 2013
Verified Purchase
I received this book today. It was purchased as a used item and so comes with slight marks on the spine but seems clean on the inside. It does not look well read as it is quite stiff still. Thank-you for the prompt service and I hope you are encouraged in doing a fine job. I recommend used books from this seller.
Read more
Helpful
Sending feedback...
Thank you for your feedback.
Sorry, we failed to record your vote. Please try again
Report abuse