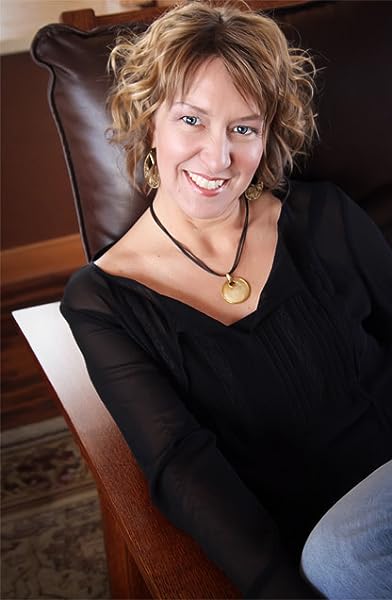 A.M. Sexton (who also writes gay romance as Marie Sexton) is a typical soccer mom. She has a fondness for wine and cheese, an addiction to coffee, and occasionally bleeds orange and blue. She lives in Colorado with her husband, their daughter, her dog, and one very stupid cat.
Start reading Release: Davlova: Book One on your Kindle in under a minute.

Reader 1
4.0 out of 5 stars Different
Reviewed in the United States on March 19, 2019
Verified Purchase
Different and dark but it pulls you in. You scream and yell at the main character hating and loving along with him.
Read more
Helpful
Comment Report abuse

Andreams
5.0 out of 5 stars Loved it!
Reviewed in the United States on December 4, 2015
Verified Purchase
I loved every single thing about it. Characters, story and quality of writing. I wish Marie Sexton had released it under her own name because no one should miss this. It's a little bit of dark and a lot of suspense. Romance is definitely secondary and that's sometimes difficult to find with M/M books.
Read more
Helpful
Comment Report abuse

regpinky
VINE VOICE
5.0 out of 5 stars Great story telling
Reviewed in the United States on September 21, 2016
Verified Purchase
This is the culmination of this two book series and is a masterpiece of gay fiction. Great story telling, intriguing and captivating!
Read more
Helpful
Comment Report abuse

AlexJouJou
VINE VOICE
5.0 out of 5 stars Excellent dystopian with lots of conflict and a little revolution!
Reviewed in the United States on February 27, 2015
I am very surprised there are so few reviews for this novel here.

I went looking for a kind of dystopian feeling novel - and didn't much care if there was romance or sex or whatever. I wanted some great world building, a kind of victory of the masses, and some great characters who I get behind when they kicked but. I got so much more than that. The world created here was very rich, very vibrant. True to the dystopian genre it contrasts the "have's" with the "have not's" by exploiting the type of creature comforts that differentiate the two. I love the juxtaposition of modern technology on what feels like hundreds of years old society - it makes it flavorful and fun.

The main characters are spell binding and so dang interesting that you will not want to stop reading. The bad guy's are suitably gray - and there is love with pain. Up and down you go as you live life through the MC's view - and no one is all good or all bad. I was very engaged in this - and read it straight through on a long flight. I highly recommend it - but don't go into this thinking it's a romance. There are romantic elements (and, yes, sex) but it's not the focus. The metaphorical sunset occurs but who's riding off is not what you might think. I'm very anxious to see what happens with Book Two!
Read more
One person found this helpful
Helpful
Comment Report abuse

Jules Bowersox
4.0 out of 5 stars 4 1/2 stars!! Tough. But, sooooooo worth the read!!
Reviewed in the United States on August 7, 2014
A.M. Sexton’s Release is RIVETING. You know how people describe books as page-turners? Or, claim “I couldn’t put it down!”? That was this book for me. It was in equal turns beautiful and disturbing – and, I could NOT put it down.

A dystopian tale set in the fictional city-state of Davlova, Release is extremely raw and dark. Our protagonist, Misha, is a pick-pocket who is tasked by his clan leader to become the whore of one of the noble pureborn who run the city, in order to spy on him and bring information back to the trenches that would help fuel the revolution that is brewing beyond the Upper City.

Misha’s mark is Miguel Donato, one of the most powerful men in Davlova, who has many secrets, as well as an overpowering violent streak. Misha soon learns to anticipate – and sometimes diffuse – Donato’s moods, and identifies with him separately as either Donato, the terrifying and abusive man he is meant to betray, or Miguel, the kinder half of his master.

The thing that made this book VERY difficult to read at times, is obviously the abuse that Donato inflicts on both Misha and Ayo, a sex slave Misha meets while at Donato’s house. The abuse escalates as the story progresses – and Donato’s place in the governing of the city becomes more stressful – and Misha finds himself hating the man that he has also grown to love. The author does a fantastic job of creating this relationship in the midst of the horrifying abuse pattern, which alternately shows us both the beast, Donato, as well as the incredibly loving and tender, Miguel, who Misha finds himself hopelessly drawn to and in love with. Some of the scenes are extremely rough. There are warnings attached to the book on Amazon, and rightfully so. However, I found myself getting further and further sucked in to the story and the characters. As sort of an aside, I also found it interesting, in hindsight, that though there is a LOT of sex in this story it in no way felt superfluous or distracting. Often this amount of sex would seem over-the-top to me…but, it wasn’t here. I felt it in every way added to the character development, or moved the story along.

The world that Sexton has created here is fascinating. Her storytelling and writing are so strong, that even as I was questioning myself for enjoying the book so much, I was incapable of stopping. Some of her prose when describing Misha’s feelings and observations (as in the quote I chose above) is absolutely breathtaking. The descriptions of both the opulence and decadence of the Upper City, as well as the conditions and poverty in the trenches, are also stunning. As a leading character, Misha is likeable, feisty, extremely bright, and also incredibly sexy. Ayo is beautifully heart-breaking and fascinating, and Misha finds himself becoming increasingly drawn to and protective of him as well. The pace of the story was perfect, and the ending was thrilling – and surprising! I can’t wait for Return to come out in the fall so we can see what happened to some of the supporting cast (whose characters were also rich and very well-written), and get the conclusion of the story!
Read more
Helpful
Comment Report abuse

aviv shener
5.0 out of 5 stars Amazing work.
Reviewed in the United States on January 6, 2018
Amazing book.
Complex characters and fantastic writing. The author didn't hold back and I love that.
Read more
Helpful
Comment Report abuse
See all reviews from the United States

Cheryl
5.0 out of 5 stars Fantastic Fantasy
Reviewed in the United Kingdom on October 25, 2015
Verified Purchase
I loved this book. It was different to anything I've read. Whilst definitely fantasy it read like a contemporary and I didn't find myself straining to picture at all. In some ways it was a harsh book, but there was a sense of buoyancy throughout that made it very easy to read. I'm not into giving away too much of the story. Let's just say it has a master, a whore and a slave. By the end, however, I was inclined to wonder who the master really was, and whether the monster was a monster after all
Read more
Helpful
Sending feedback...
Thank you for your feedback.
Sorry, we failed to record your vote. Please try again
Report abuse

SwQ
5.0 out of 5 stars Precious.
Reviewed in Italy on August 6, 2016
Verified Purchase
I finished this book with a sense of confusion and numbness, and I've been uncertain in what I thought about it for a very long time.
I started it with a bit of fear. I'm not used to dark-romance, so I was frightened it would be a sort of destruction for me. I don't like horror, I'm not used to violence... Well, it went great, as for everything I have read from this writer.
Characters are diamonds, I loved how we discover them little by little through the story. I read others book about the kind of relationship "master-slave" - and this is not the case, since Misha knows exactly what he is doing, what he has to do and he's not the kind of slave we all think about. This is the only one so far that pleased me.
Donato is a very complex character. I found out a bit of... bipolarism, maybe? Some kind of disease I'm not close to, but very interesting. The relationship between him and Misha reminded me of domestic abuse and Stockholm syndrome (something I don't know, so take my words with a pinch of salt), mostly because of Misha's behaviour. He knows who Donato is, what he does, but he ends to accept it, even excuse him. Until he finds something he doesn't want to endure.
A little treasure I really recommend.
Read more
Helpful
Sending feedback...
Thank you for your feedback.
Sorry, we failed to record your vote. Please try again
Report abuse