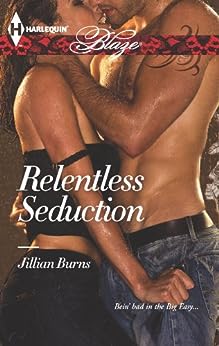 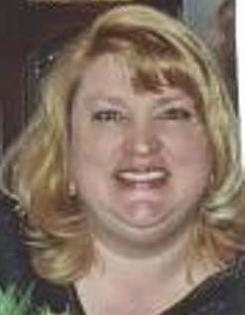 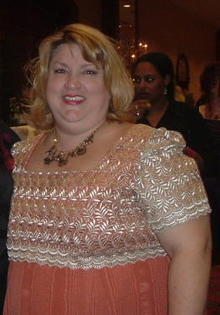 Jillian lives in Texas with her supportive husband, three kids, and a sweet Golden Retriever. She thinks her emotional nature--sometimes referred to as moodiness by those closest to her--has found the perfect outlet in writing stories filled with passion and romance. Jillian loves reading romance novels and believes they have the power to change lives with their message of eternal love and hope. She loves to hear from readers. Please visit her website www.jillianburns.com --This text refers to an out of print or unavailable edition of this title.

Claire Brooks hesitated at the door to Once Bitten. A sense of eerie foreboding made her shiver.

Nonsense. She'd read too many gothic novels in her youthful summer days.

There was no such thing as premonition, and it certainly couldn't make one shiver. It was merely the cold, drizzly night. And her worry for Julia.

Despite the jazzy wail from a street musician's trumpet down the street, the occasional clip-clop of horses' hooves pulling carriages, and tourists still roaming the sidewalks, this area didn't feel as if it was part of the French Quarter.

It was simply another New Orleans bar, the only difference being it attracted tourists with its singularly macabre theme. More importantly, it was the only clue she had.

Claire pushed the button on her phone and compared the picture Julia had sent her last night to the purple neon sign in front of her. Last night, Julia had been standing in this exact spot. So this was the logical place to begin her search.

That picture was the last communication she'd had from Julia. Despite leaving her dozens of increasingly frantic messages, Claire had heard nothing from her friend in almost twenty-four hours. What if she was already…dead?

She shook off the horrifying thought, swung open the door and stepped purposefully inside.

Creepy discordant music assaulted her ears. Her eyes stung and her nostrils itched from the smoky incense. But at least the temperature inside was warmer than the chilly rain outside.

She closed her umbrella, shrunk it to its mini size and placed it in her oversize tote bag. Searching for Julia's mischievous smile and blond hair, Claire began to study the assortment of unique individuals gyrating around the dance floor—or in iron cages hanging from the ceiling.

In addition to people with multiple piercings, an overabundance of tattoos and unusual costumes, there was a man wearing only tight, black shorts and a leather collar around his neck. And working her way around the room was a naked woman with a large, very much alive snake wrapped around her torso. A large percentage of the patrons sported dyed-black hair, kohl-lined eyes and…fangs.

Whether they were fake, or real incisors filed to a point, the fangs didn't disturb Claire. There was no such thing as vampires. But these people were all welcome to their eccentricities. The only thing Claire cared about was finding Julia. And if it meant questioning every vampire wannabe in this place then that's what she'd do.

She lifted her chin and joined the occupants of the famous vampire bar, Once Bitten.

As she tried to make her way through the mob of sweaty people, she felt their stares on her as if she were the weird one. Actually, she guessed she was.

But she kept mingling, searching faces for Julia or the guy she'd disappeared with. Eventually she found herself in a darkened lounge with low, red velvet sofas forming an enclosed sitting area. Between each grouping of seats lay old-fashioned wooden coffins, on which people had placed their drinks. Coffins as coffee tables. Claire raised her brow. Clever.

These sitting areas were occupied with similar-looking patrons. Goths, freaks and vampires.

A glance to her right revealed a surprisingly normal-looking bar with neon beer advertisements flashing above a mirrored wall stacked with shot glasses and bottles of liquor. Cocktail glasses hung upside down from a rack above the bar with more patrons perched on black wooden stools.

She headed there, pulling out her cell phone and bringing up the picture of Julia on the way. Snagging a lone stool, she leaned forward against the scratched, worn oak to catch the bartender's attention.

He was wiping a tumbler with a pristine white towel, while at the same time conducting a flirtatious discussion with two coeds in low-riding blue jeans and halter tops. The girls were engrossed in whatever he was saying, and who could blame them when he wore such a dangerously sinful grin.

She summoned her inner Julia and raised her hand and waved. "Excuse me?"

The moment the man turned her way a quiver of desire shot through her. Slate-gray eyes fringed with dark lashes bore into her, freezing her in place. His collar-length black hair wasn't dyed, nor was the thick stubble darkening his angular jaw.

His grin softened as he leisurely replaced the tumbler on a shelf behind him before sauntering over to flatten his palms on the bar before her.

"What you need, cher?" His voice was as smooth and as deeply Southern as Spanish moss hanging from a Cypress tree. He wore a wide leather bracelet on his left wrist and a thick onyx ring—a bat with its wings wrapped around his right ring finger. She lifted her gaze to his hard chest outlined by a tight black tee.

Claire opened her mouth but nothing came out. "Have yy—" She felt her face heat and her throat close up as he stared at her expectantly. Two decades of therapy and determination to overcome her stutter destroyed in an instant of anxiety.

Anxiety for her friend, of course. This breathlessness was in no way attributable to the proximity and attention of the bartender. The only true friend she had was missing. It was natural to be distraught.

Remembering her purpose, Claire drew in a calming breath, lifted her phone to the bartender's eye level and clicked the button to bring up Julia's picture again. "Have you seen this woman in your bar tonight?

The bartender's gaze shifted down to her phone and back to her eyes without the rest of him moving a muscle. "No."

He moved his weight from one foot to the other, causing his hips to shift, as well. "Cher, I've got hundreds of customers coming through here."

Claire gritted her teeth, biting back a stinging rebuke. "Please." She shifted her phone in front of his nose. "She's missing and I have to find her."

A muscle in his jaw twitched. "If she's missing, call the cops." He turned away.

As if she hadn't already tried the police first thing this morning. Julia was an adult, they'd said. Must be missing for forty-eight hours, they'd said. They hadn't taken Claire's fear for her friend seriously at all. As if Claire didn't know when something was really wrong with Julia.

She'd known Julia since third grade and Claire knew without a doubt that this was not just a case of Mardi Gras hangover. Sure, Julia had ditched her last night to hook up with that weirdo with the tattoo. Claire was accustomed to Julia's free-spirited ways. Even when she hadn't returned to their hotel room by this morning, Claire had calmly packed their things and gone to the airport, assuming Julia would come racing up to her at the last minute, full of false chagrin and a scintillating account of her adventures with the "vampire." But she hadn't.

And Claire wasn't leaving New Orleans without making sure Julia was alive and well.

"She might've been with a guy who had three blood drops t-tattooed down the corner of his mouth," Claire called after the bartender.

The bartender froze, and several people at the bar around her quieted and stared at her. He turned back and leaned in close, conspiratorially. At last, she would gain some useful information. She leaned forward and caught a hint of his spicy intoxicating cologne.

"This is a vampire bar. Lots of people have that tattoo."

Hope deflated. And irritation flared. He was taunting her. Then understanding dawned. She yanked her purse open, pulled out a twenty-dollar bill and slipped it across the bar toward him. "Perhaps this will help you r-remember the man or my friend?"

His eyes narrowed and his lips tightened, harsh and cynical. "You want a drink, I'm your man. Otherwise, I can't help you." He gave his attention to the waitress who'd stepped up with an order.

Claire fumed. "I'll have a strawberry d-daiquiri," she called out.

He glanced at her, brows raised. "A strawber—" His lips curved up at the corners. "Coming right up." As he shook the hair from his wary eyes, a tiny silver loop in his left ear gleamed in the light.

He moved gracefully, spinning back and forth, grabbing bottles and pouring alcohol, and drawing beer into mugs with speed and precision. Tall, but slim, except for his wide shoulders and large biceps, he could've been a member of the Boston rowing club. Yet, unlike those privileged boys, this man seemed unaware of his masculine good looks.

Finally, the waitress left with her filled tray. Then he bent to lift a clear plastic bowl from under the bar.

Her gaze shot straight to his behind and the worn jeans outlining his impossibly sexy derriere. Wait. Was she actually checking out a man's bottom? In her twenty-eight years as a female, she'd never understood why other women noticed things like that. But, now, now that her best friend was missing and possibly in danger, now she…noticed?

He peeled off the lid, grabbed a handful of large, red-ripe strawberries and dropped them into a blender. As he prepared her drink, he stole a strawberry from the bowl and popped it into his mouth. He glanced at her and she looked away, feeling her cheeks heat with embarrassment.

She should be searching the bar for her friend or that guy, showing Julia's picture around. Claire spun, putting her back to the bar, and scanned the room. "Here you go."

She jumped and turned back as he set the fruity drink in front of her and took the twenty still lying on the bar. He sauntered over to a computer, touched the screen and made change when a drawer popped open.

Digging a business card from her purse, she scribbled her hotel's name and her cell number on it and shoved it into his hand as he offered her the change.

"Please. Keep the change and if you see my friend, would you call me? My cell's on here and where I'm staying—the Les Chambres R-R... --This text refers to an out of print or unavailable edition of this title.