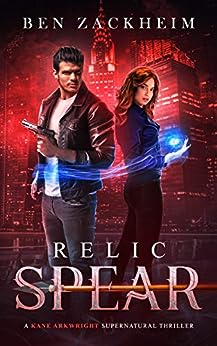 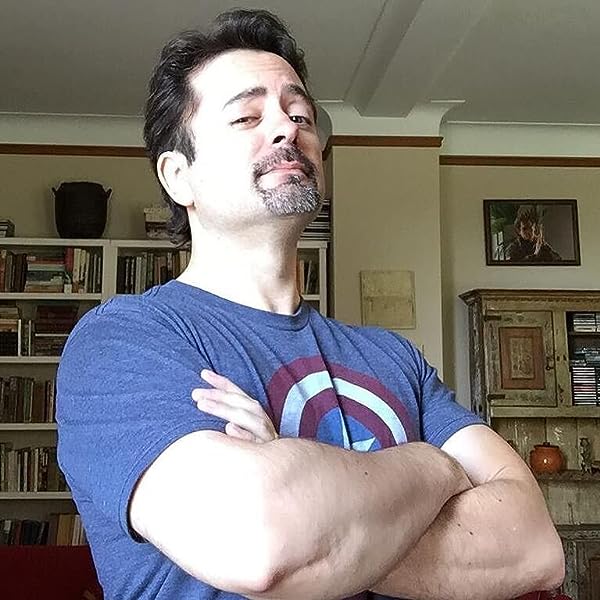 by Ben Zackheim (Author) Format: Kindle Edition
Book 8 of 10: Relic
See all formats and editions
Sorry, there was a problem loading this page. Try again.

May the best gods win.

Kane thought he was starting to understand the war that ended the world. But the game involves higher stakes than he could have possibly imagined.

He must find out who he really is. And fast.

The gods are playing for keeps as they carve out their domains. They're the ones dictating the rules. Kane must find a way to break every single one of them.

After all of his battles, Kane Arkwright realizes the only thing standing between life and death, is myth.

If you like Kevin Hearne, M.D. Massey, John P. Logsdon, Larry Correia, Al K. Line or Shayne Silvers, you will LOVE the first installment in the Kane Arkwright series by Ben Zackheim.

Click BUY NOW to travel the globe with supernatural treasure hunters who do it for the wealth, the glory and the undead body count.

"Zackheim's tomes are a never-ending rollercoaster ride...the kind you want to go forwards and backwards on, even after downing a pound of pizza and ice cream. Relentlessly entertaining and often hilarious..."-- John P. Logsdon, author of Ian Dex and the Paranormal Police Department series.

Limited-Time Offer
Join Audible Premium Plus for 60% off. Get this deal
Next 3 for you in this series See full series
Total Price: $11.97
Books In This Series (10 Books)
Complete Series
Relic
Kindle Edition
Page 1 of 1Start OverPage 1 of 1
Previous page
Next page

Kane and Rebel have different talents. He's good with a handgun. She a Master Magicist.

If you like Al K. Line, M.D. Massey, Kevin Hearne, Larry Correia, or Shayne Silvers, you will LOVE the RELIC series by Ben Zackheim.

RELIC: BLADE is where the fun begins!

The first book in the series, RELIC: BLADE, has butt-kicking characters, crazy action, and snark pouring out of the pages.

And the Kindle eBook.

"Zackheim's tomes are a never-ending rollercoaster ride...the kind you want to go forwards and backwards on, even after downing a pound of pizza and ice cream. Relentlessly entertaining and often hilarious..." -- John P. Logsdon, author of Ian Dex and the Paranormal Police Department series.

Ben’s storytelling adventures started as a Production Assistant on the set of the film, A River Runs Through It. After forgetting to bring the crew’s walkie talkies, losing Robert Redford’s jacket and asking Brad Pitt if he was related to Paul Newman (in front of Paul Newman who was a guest on the set) he decided that film production didn’t “speak” to him. Since no one else on the film would speak to him either, he knew he needed to find work that required minimal human contact.

Writing. THAT he could do…

His urban fantasy series, RELIC, follows Kane and Rebel as they traverse the globe, trying to beat the newly-awakened vampires to supernatural treasures.

There's only one way this story can end. On the edge of a blade.

Sign up for Ben's newsletter and enjoy discounts, perks and peeks at his upcoming releases at http://www.benzackheim.com

Ben's storytelling adventures started as a Production Assistant on the set of the film, A River Runs Throught It. After forgetting to bring the crew's walkie talkies on the first day of shooting, losing Robert Redford's jacket on a freezing morning, and asking Brad Pitt if he was related to Paul Newman (in front of Paul Newman) he decided that film production didn't "speak" to him. Since no one else on the set would speak to him either, he knew he needed to find work that required minimal human contact.

Writing. That did the trick.

His Relics series has earned praise from readers and author-readers alike. Joseph Nassise, New York Times bestselling author of the Templar Chronicles says, "The action and hilarity are non-stop in this rip-roaring thrill ride of an adventure. Ben Zackheim delivers!"

Author, John P. Logsdon (ononokin and Ian Dex) says, "Zackheim's tomes are a never-ending rollercoaster ride...the kind you want to go forwards and backwards on, even after downing a pound of pizza and ice cream. Relentlessly entertaining and often hilarious..."

Stephen King says, "I'm not providing blurbs at this time," but Ben is chipping away at King's resolve.

Sign up for his newsletter and enjoy peeks at upcoming releases at http://www.benzackheim.com

5.0 out of 5 stars
5 out of 5
39 global ratings
How customer reviews and ratings work

Double Fire
5.0 out of 5 stars More adventure. More tricks and twists and somehow it’s always fresh and new.
Reviewed in the United States 🇺🇸 on July 2, 2022
Verified Purchase
You know the meme “find someone who looks at you like X looks at Y”?

That fits here. Chicks everywhere should find a man who loves them the way Kane loves Rebel.

He’ll never try to trap you. He’s not a jealous lover. He’ll know all your favorite things but he won’t force them on you. He might accidentally shoot you, but he’d journey into hell to bring you back. In his heart he’ll worship you like a goddess, but he’ll also have incredible comebacks to bring you back down to Earth and keep you grounded. He’ll know all your best traits as well as your flaws, and he’ll remind you of all the ways you kick ass when you need a cheerleader most.

His only flaws are that he might never have the courage to tell you just how much he adores you. It might take the end of the world to get him there, if he ever gets there. He’ll be so confident that his love is undying that he’ll allow you to journey all over the damn planet doing your own thing, knowing you’re brave as hell and can handle anything, meanwhile his heart has a you-shaped hole in it as he waits for god knows what to happen before he’ll take a risk on rejection.

But still, he won’t be afraid of your strength and power, and he’ll rely on you just like an equal, expecting you to pull your weight. He’s not a knight in shining armor in the classic sense. You might have to rescue him a couple times (he’s rescued you, so…) but his swagger after you save his ass will make you laugh and possibly want to rip his clothes off.

So, basically, he’s perfect… for a certain type, I guess.

Read this book—read this series!—if you’re into that type (I am!).
Read more
One person found this helpful
Helpful
Report abuse

Mary Letton
5.0 out of 5 stars Awesome!!
Reviewed in the United States 🇺🇸 on June 23, 2020
Verified Purchase
This addition to the Relic series is so good, I could hardly put it down. I always enjoy Kane’s adventures and The humor in the story.

Lisa C
5.0 out of 5 stars Kane’s world is so much fun to dive into
Reviewed in the United States 🇺🇸 on June 25, 2020
Verified Purchase
Amazing urban fantasy. Kane is back and even funnier. Full of action, mayhem and hilarity. It’s full of curve balls and twists you don’t see coming. Gods, hemogoblins, artifacts and magic. Ben has written another great Relic book.
Read more
Helpful
Report abuse

Bennah
5.0 out of 5 stars Gods behaving badly
Reviewed in the United States 🇺🇸 on June 27, 2020
Verified Purchase
This book was a heck of a ride and I enjoyed every bump. Can't wait to find out what happens next
Read more
Helpful
Report abuse

Kindle Customer
5.0 out of 5 stars Great read
Reviewed in the United States 🇺🇸 on September 20, 2020
I chose this five star reading because of the authors attention to detail, I could not stop reading, I could not wait until the next one. That being said, I would recommend these books to any science fiction reader. As the story carries on the only thing I did not agree with was the language, I believe you can get you're point across without all the colorful language, still all in all I can't wait for the next one to come across my device
Read more
Helpful
Report abuse

Leslie W.
5.0 out of 5 stars Excellent addition to the Relic series!
Reviewed in the United States 🇺🇸 on June 23, 2020
I loved this book! Ben Zackheim has created a cast of characters I want to follow from story to story. I want to know more about them. He has built a story arc that is exciting and has good action. I enjoyed reading all of the Relic series. I think you will too. Be mindful that this book picks up a previous story thread. If you want to know the whole story you gotta start at the beginning. Clear your schedule. You are going to be busy!
Read more
Helpful
Report abuse

gamergirllb98
5.0 out of 5 stars Magnificent
Reviewed in the United States 🇺🇸 on June 28, 2020
I absolutely love this series but this book took it to a whole new level! So much snark! Question answered but bringing up so many more questions, seemingly non stop action. Easter eggs! This book has everything! Mind blown! Well done Ben!
Read more
Helpful
Report abuse
See all reviews

harrads
5.0 out of 5 stars “Memory withstanding”
Reviewed in the United Kingdom 🇬🇧 on June 26, 2020
Verified Purchase
This book is a little longer than previous Relic books, but don't let that put you off, it just means you get more great writing for your money. This book does not disappoint with all the action and plot twists from previous books. Secrets are revealed that will have a huge effect on future events, with new friends and old helping out along the way. You cant go wrong and I cant wait for the next one.
Read more
Report abuse
See all reviews
Report an issue
Does this item contain inappropriate content?
Report
Do you believe that this item violates a copyright?
Report
Does this item contain quality or formatting issues?
Report