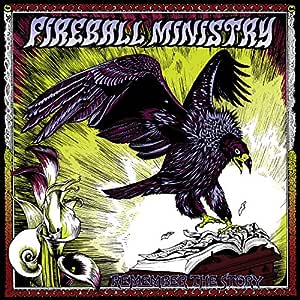 Fireball Ministry (Artist) Format: Audio CD
4.8 out of 5 stars 19 ratings
See all 3 formats and editions Hide other formats and editions
Includes FREE MP3 version of this album.&nbspProvided by Amazon Digital Services LLC. Terms and Conditions. Does not apply to gift orders.&nbspComplete your purchase to save the MP3 version to your music library.
Available at a lower price from other sellers that may not offer free Prime shipping.

2017 release. The kings of stoner/doom metal reclaim their throne on this epic comeback album that is being hailed as their strongest effort to date. Remember The Story calls on longtime FBM fans to return to the fold with songs that harken back to the band's glory days such as "Back On Earth," the riff-tastic "The Answer," the incredible title track, and a surprising Motörhead cover to close the album. The band has been fully re-energized by the addition of former Kyuss bassist Scott Reeder who records his first full length with the band here and adds an intense new dynamic with his complex and melodic playing.

Mat Adder
5.0 out of 5 stars Stoner Rock Does Not Get Any Finer!
Reviewed in the United States on November 23, 2017
Verified Purchase
Despite what you may have thought, heavy metal/rock and roll, with its crunchy guitars, deep grooves, and ripping pace, isn’t dead, or even hiding out at the end of the dial. It’s been resurrected, brought screaming back to life, in the form of Fireball Ministry’s newest outstanding release, REMEMBER THE STORY!

They’ve gone through quite a few changes over the years, but the consistent sonic talent of founding member’s vocalist/guitars James Rota, Emily Burton, and drummer John Oreshnick – this outing adding the licks of power-bassist Scott Reeder, not only cast shine on their humble stoner rock roots, but deliver sonic proof of the reason why Fireball Ministry endures all these years in the face of a challenging musical landscape – and continues to dominate triumphantly. Always innovative, utterly uncompromising in their attitude to blow minds with their sheer talent to rock, the group’s musical evolution continues with REMEMBER THE STORY in both their style and sound. Fireball Ministry has risen from the crowded metal ranks to become a sonic force in top form, ripping out truly awesome music with each album. REMEMBER THE STORY marks a pinnacle in Fireball Ministry’s growth – a highly anticipated Christmas gift arriving early for all your head-banging friends and family! If you want your rock delivered for maximum effect, and worship at the church of hard rock and metal, then your prayers have been answered by James Rota and crew! In a current musical climate dominated by hundreds of channels of bubblegum artists and mediocre rappers, Fireball Ministry’s REMEMBER THE STORY is the album that drops you to your knees, thanking the heaven’s God hasn’t forgotten about all the rest of us – the true, dedicated fans who demand something unforgettable in their rock and roll!

Rock and roll leaves scars, and even the best and the brightest eventually blaze out. In one of the album’s stand out performances, the group covers Motorhead’s classic “I Don’t Believe A Word”. Given Lemmy’s recent passing, it’s a worthy tribute by one of the few kick-ass groups on the planet who can pull it off, and a must have for fans of either band.

One of many unforgettable cuts on REMEMBER THE STORY, is the track “Back On Earth”! Reminiscent of Iron Maiden and the legendary Blue Oyster Cult, the track opens with – you know it! – COWBELL(!) and then explodes into full-tilt, head-banging brilliancy! “Back On Earth” will have you mashing repeat on the playlist! (COWBELL, man! Yes! COWBELL! Jim Rota – you have truly outshined with “Back On Earth”! COWBELL… You prove yourself not only a musical genius, but a true, full-fledged, hard-rock God!)

After seven dedicated years of honing their metal chops to audio perfection since the release of their last album, it’s great to report that Fireball Ministry is finally back and showing no signs of stopping, guitar’s blazing, with REMEMBER THE STORY. Somewhere up above, the mortal’s that gave their hearts and souls to rock and roll – like Lemmy, Cornell, and Malcolm – are sucking down whiskey, rocking, and partying their asses off to the Fireball Ministry’s newest hardcore epic, the latest triumph in a two-decade spanning career that shows no signs of letting up. Well worth the highly anticipated wait, REMEMBER THE STORY showcases a band that continues its strive for dominance lyrically, musically, and in unrestrained head-banging!

Reviews
4.0 out of 5 stars Real Rock N Roll Spews From This Band
Reviewed in the United States on April 7, 2018
Verified Purchase
I love this band and have for years. This album is not their strongest release, but I never tire of hearing the Rev and Co do their thing. In a world where I have to hear things about a band of kids who directly rip off one of the greatest bands to ever exist as being the savior's of rock n roll, I'm so happy to actually know the real truth...
Bands like Fireball Ministry and the Hellacopters along with way Way WAY too many to list here, have been carrying that mantle and ideal for along time now. Do yourself a favor and get this and the rest of their releases. Go check them out with the Hellacopters and many of those real rock n roll bands in Vegas this June!
Read more
Helpful
Comment Report abuse

Seve99
5.0 out of 5 stars Remember the story 4.5 Stars
Reviewed in the United States on October 7, 2017
Verified Purchase
Love this band, not quite as good as their last album , but there is plenty here to enjoy. The Answer is the best track, one instrumental, stop talking... back on earth , very good. Only listened a couple times through...their music really makes you feel good....4.5 stars.
Read more
One person found this helpful
Helpful
Comment Report abuse

Bvers
5.0 out of 5 stars Five Stars
Reviewed in the United States on January 9, 2018
Verified Purchase
I Like it. Very Good.
Read more
Helpful
Comment Report abuse