You've subscribed to The Sounds of Us! We will preorder your items within 24 hours of when they become available. When new books are released, we'll charge your default payment method for the lowest price available during the pre-order period.
Update your device or payment method, cancel individual pre-orders or your subscription at
Your Memberships & Subscriptions
There was an error. We were unable to process your subscription due to an error. Please refresh and try again. 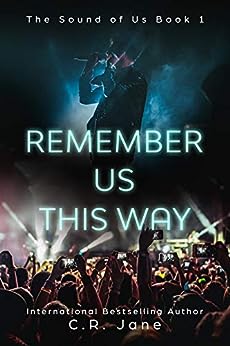 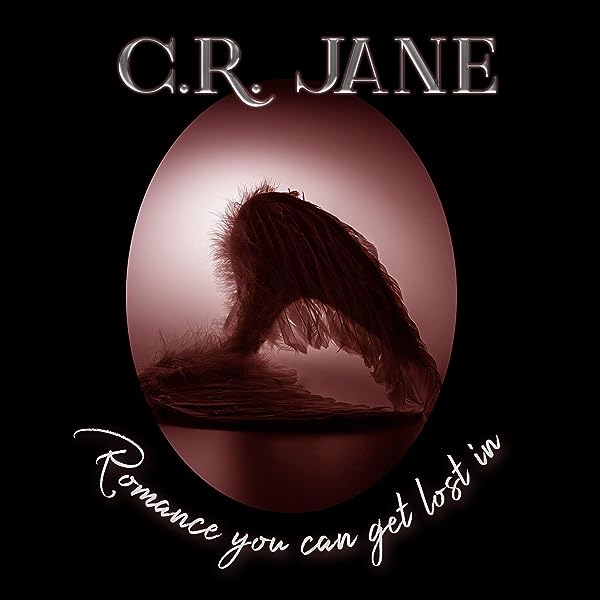 Remember Us This Way: A Contemporary Rockstar Romance (The Sounds of Us Book 1) Kindle Edition

by C.R. Jane (Author) Format: Kindle Edition
Book 1 of 3: The Sounds of Us
See all formats and editions
Sorry, there was a problem loading this page. Try again.
Read more Read less
Previous page
Next page
Books In This Series (3 Books)
Complete Series 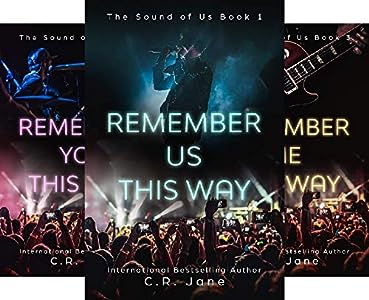 4.3 out of 5 stars
4.3 out of 5
200 global ratings
How are ratings calculated?
To calculate the overall star rating and percentage breakdown by star, we don’t use a simple average. Instead, our system considers things like how recent a review is and if the reviewer bought the item on Amazon. It also analyzes reviews to verify trustworthiness.
Top reviews

Hopeful
2.0 out of 5 stars My opinion is endless, Spoilers
Reviewed in the United States on January 26, 2019
Verified Purchase
First, I'll state rock star romance is my absolute favorite out of all the genres, erotic romance, friends with benefits, etc. prude I am NOT. My issue is this, why can't the author clearly state in the synopsis cheating and MMMF! Seriously, the hero is not only married after they left but in a sick and twisted way she's with all 3 band members and they all love each other romantically? I'm sorry but after I gave my last harsh review a fellow reader/reviewer someone I trust 100% about criticizing my opinion stated I should always expect cheating whether it's clear in the synopsis or not in a rock star read. Well, that I can swallow a little bit, not accept it because I write myself and if someone is buying/downloading my work I feel that they should be given the head's up on everything and not falsely drawn in by assumption. Now, the hero being with all three men, all of the band members while being married to a monster who beats her and she fails to tell them immediately after first seeing them 5 years later?

I will say this I do in fact like the author's work but not this story. I will not be going on to book 2, cliffhanger or not when Jensen walks in to tell Jesse if she told him she was married while they lay in bed together; I don't care that much. I can't wrap my head around them all 4 having a relationship. Ew! That's just ...there are no words. It's not my thing and I won't knock others who think this is an unbelievable great 5 star read but for me I need one hero and one heroine. I mean if she gets pregnant...what do they do have a DNA test to see which 3 is the father? Wait, what? Nope, not for me. Let's not even discuss her nearly killing her husband after he comes after her with a knife, cuts off her air supply and she retaliates and leaves him unconscious but breathing to what? The police with all of his connections...book 2? Okay, but she just left without telling him first like nothing happened an hour or three before she went back to them? Did Jesse not see the condition she was in after the beating, head slamming against the wall breaking dry wall, the limp? Come on.
Read more
43 people found this helpful
Helpful
Report abuse

Jennifer G
VINE VOICE
4.0 out of 5 stars Mistakes and regrets, broken promises and heartache
Reviewed in the United States on January 27, 2019
Verified Purchase
She knew them before. Before the stadium tours, the millions of adoring fans, the #1 hits. She was their girl, promises were exchanged. She was the one who broke her word. She was the one who broke all four hearts. She's never forgotten them and even though it's been years, she still loves them. But what about them? How do they feel? Do they even remember her? This is her chance to see. Her last chance to see the only boys she's ever wanted; the last chance to save herself.

I love RH, especially contemporary RH. I love rock star romances. I love CR Jane's writing, her characters, their stories. I loved Remember Us This Way. It's not often a book surprises me but this one did. I wasn't expecting the circumstances. I wasn't expecting all of the pain. This is a book of mistakes and regrets, broken promises and heartache. It's emotional; a brief moment of happiness and elation followed by fear, shame, remorse, anger, hurt. There is a sense of hopelessness hanging over Ari. The tension is palpable. The sense of foreboding from the beginning that grows with every page creating absolute dread from my worries.

We get to know Ari, Tanner, Jensen, and Jesse through flashbacks and current days. We follow their relationship from the first instant they see each other, through their short time together in school, to their separation; from the beginning of their dreams to the guys' current success and Ari's nightmare. These characters are flawed, damaged. Their weaknesses are fully exposed. Their love for one another is not freely shared until it's too late. Communication fails. Their choices, especially Ari's are a series of mistakes. Love is only a small part of their story.

This book was close to a 5-star for me but I needed a little more. I need to understand Ari a little more. On the one hand, she's strong enough to survive her parents and her upbringing but she never let go of her broken beginning. I'm not talking about breaking her promise to the guys, I'm talking about each choice she made after she broke her word. Every aspect of her and Gentry is wrong and doesn't endear her to me. The explanations were not enough. I won't go into details because I don't want spoilers but her actions are contrary to her intelligence, survival skills, her love for the guys. I was bothered by the guys never making any attempt to get her to change her mind, no talking, no visits. I was also bothered by the fact no words of feelings were ever exchanged. At their original age without any declarations of love, there was nothing truly binding them together. Too much was left unsaid. The boy's dreams took precedence. I loved the originality of this RH but without these key insights, the group wasn't solid enough for me to fully embrace. I am desperate for the next book. Maybe more so than for any other one of this author's series. I need my issues resolved and I am interested to know what kept Ari from following through with their plans. I need to know how the guys handle the cliffhanger. The next scene is make or break for me.
Read more
7 people found this helpful
Helpful
Report abuse

Cat
5.0 out of 5 stars Possibly the best C.R. Jane book yet!
Reviewed in the United States on January 25, 2019
Verified Purchase
I've read this author from the beginning and it just seems like she gets better with each book that comes out. I thought the Fated Wings series was good, then she came out with Lamented Pasts, which had me crying in places it was so heart-wrenching. But I feel like this new series The Sound of Us is going to blow those 2 out of the water. While this first book ends on a massive cliffhanger, and we still don't know what happened to keep Ariana away from the guys and breaking their hearts...I feel like it's definitely going to an awesome, emotional roller coaster of a ride that I can't wait for!
Read more
6 people found this helpful
Helpful
Report abuse

ObsidianAsh
5.0 out of 5 stars Jeez women my heart cant take anymore but keep it coming
Reviewed in the United States on January 26, 2019
Verified Purchase
Contemporary Romance. Second Chance. Rh. 3 Rock stars. A Past Present Dialogue. Ari finds her self in a going no where abusive marriage after abandoning her true loves. So when her husband goes out of town on a trip and her loves coming in for a tour, she has to go. This was an emotional rollercoaster. Ups and downs with a lovely cliffhanger. Read it! Read it now. You totally need this story in your life. You won't be disappointed I'm sure. 😘
Read more
6 people found this helpful
Helpful
Report abuse

Jessica Robbins
4.0 out of 5 stars What an ending
Reviewed in the United States on February 27, 2019
Verified Purchase
What a ride this book is. We get this whole then and now thing going on where the story unfolds in small bursts that keep you questioning wondering what happens plus what will. There is some dark stuff going on during both that will have rooting for things to go ally go her way though I think we need more books for that. All of this leads to the lovely cliff hanger that will make you wish book two was out now. In depth characters in a rockstar world. I really liked it so I give it 4/5 stars.
Read more
2 people found this helpful
Helpful
Report abuse
See all reviews

Jessica
5.0 out of 5 stars Light hearted romance
Reviewed in the United Kingdom on June 13, 2019
Verified Purchase
Loved this book!! Can’t wait for book 3 to be released and we can find out the next step of their relationship. Light hearted romance that keeps you hooked until the end of each book.
Read more
Report abuse

J Buckley
5.0 out of 5 stars Heart breaking
Reviewed in the United Kingdom on July 27, 2020
Verified Purchase
So many emotions are pulled out in this book. I like how the past is told at the same time as the present. You really are kept in the dark!
Read more
Report abuse

Leisha Andrews
5.0 out of 5 stars CR Jane just keeps getting better and better
Reviewed in Australia on March 27, 2019
Verified Purchase
CR you just keep getting better and better with every new book. Im loving your writing! You take us on an epic emotional rollercoaster ride with your characters and storylines. Just loving everything you are doing! Cant wait for the next one.
Read more
Report abuse

ree
4.0 out of 5 stars Light hearted romance
Reviewed in Australia on February 14, 2021
Verified Purchase
Seriously amazing series, like how the past is told at the same time as the present
Read more
Report abuse
See all reviews