You've subscribed to The Human Legion! We will preorder your items within 24 hours of when they become available. When new books are released, we'll charge your default payment method for the lowest price available during the pre-order period.
Update your device or payment method, cancel individual pre-orders or your subscription at
Your Memberships & Subscriptions
There was an error. We were unable to process your subscription due to an error. Please refresh and try again. 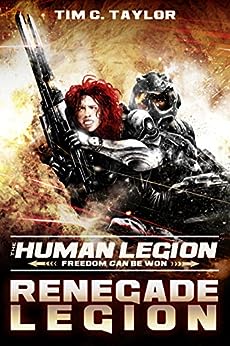 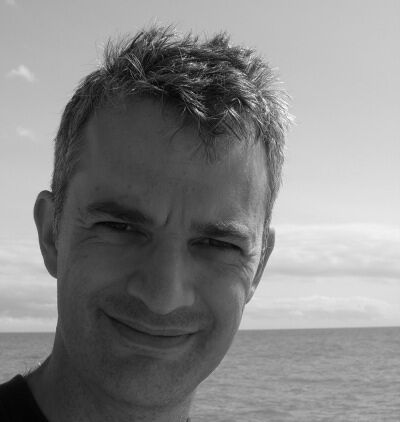 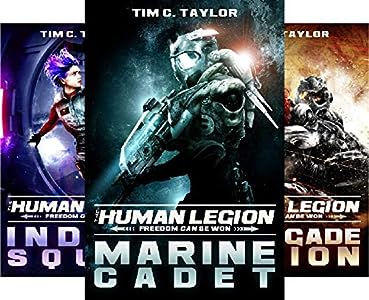 Tim C. Taylor is the author of several science fiction novels, including the Reality War series and the Human Legion series. When no one's looking, he also writes YA fantasy and science fiction short stories under the secret pen name of Crustias Scattermush. Tim lives in England. Visit him at timctaylor.com.

A veteran voice artist, Tom Zingarelli has produced and narrated many audiobooks in the last several years. He has also recorded books for the Connecticut State Library for the Blind and Physically Handicapped. His voice was featured on the popular PBS children's television program Between the Lions. --This text refers to an out of print or unavailable edition of this title.

4.2 out of 5 stars
4.2 out of 5
125 global ratings
How are ratings calculated?
To calculate the overall star rating and percentage breakdown by star, we don’t use a simple average. Instead, our system considers things like how recent a review is and if the reviewer bought the item on Amazon. It also analyzes reviews to verify trustworthiness.
Top reviews

Patrick Walls
5.0 out of 5 stars A good story teller that makes you invest you mind.
Reviewed in the United States on June 19, 2015
Verified Purchase
This is the third book in the series. I have no idea how many books are planed but I have begun to feel the interaction. The first book does little more than set the stage, it doesn't do a lot but it gets you started. In the second you begin to learn more of the people (humans) and other sentients that are in the books and how the humans are truly seen. The third book has a character development sense about it. I was a military scifi snob for a long time. I only read John Ringo or David Weber and Robert Heinlein (Starship Troopers a true military scifi classic MUST READ!) to name a few. As I ran out of authors to read I turned to Amazon and explored, not knowing the wealth of mil scifi that is here and Tim C. Taylor is very enjoyable author to read. I have liked all three Human Legion books and I will continue to read them as he writes them I will buy them too. Buy the books, enjoy the reading and open your mind. Very good books in my opinion.
Pat
Read more
One person found this helpful
Helpful
Report abuse

A story of death of friends, human catastrophe, lost battles, and future hope. A story of manipulation and destiny continues.

Spoiler - We get a glimpse of where the source of Aruns Armies will come from. But that will be a story behind another book in the series.

Much more background in this 3rd book. The fun days of youth are behind us. The hard facts of sacrifice and war are upon us.

tpatt
4.0 out of 5 stars I have been enjoying this series from the beginning, ...
Reviewed in the United States on June 15, 2015
Verified Purchase
I have been enjoying this series from the beginning, and book 3 continues the trend. The author is working with a vast landscape, so he has a lot of room to work with this story line that I would envision will continue for an additional number of volumes. This volume wraps up a few loose ends from the previous stories, setting up a villain that will likely appear in future volumes, and exposing both the strengths and weaknesses of the hero. I certainly will keep investing in the future editions, and I hope the author can keep advancing the story.
Read more
One person found this helpful
Helpful
Report abuse

PabonR
4.0 out of 5 stars Great series, BUT...
Reviewed in the United States on June 29, 2015
Verified Purchase
I like the story, but the novels could use a bit of trimming. The overall arc of the series take awhile to get to the meat of the story for each indivdual book. Sometimes world building is great, but not at the espense of the story.... Maybe I'm being too critical or just have no patience, but in each book I've experienced moments when I wished the author would just get on with it. I'll certainly buy the next book and probably the one after that too. Only time will tell...
Read more
Helpful
Report abuse

A. Zdunczyk
5.0 out of 5 stars Secrets are being found out
Reviewed in the United States on May 21, 2018
Verified Purchase
The marines know that there are more frozen in the hidden levels of the planet. They are going to first thaw the ones on the moon. May have died trying to retake the planet but now they are heading out looking for one of the hummers secrets.
Read more
Helpful
Report abuse

Kindle Customer
5.0 out of 5 stars Must Read
Reviewed in the United States on June 16, 2015
Verified Purchase
Another suberb book in a great series. As a combat veteran, the writer portrays both sides of war . That you don't win them all and that through it all victory us won. Brotherhood is the spiritual glue that holds a unit together. And no matter what brothers last forever.
Read more
One person found this helpful
Helpful
Report abuse

BOB
4.0 out of 5 stars Not bad..
Reviewed in the United States on August 15, 2017
Verified Purchase
Books 1-3 are pretty good. It is after this book that the Author seemed to have lost interest in writing the series.
Read more
Helpful
Report abuse
See all reviews

Jim Dale
4.0 out of 5 stars The Legion makes Progress
Reviewed in the United Kingdom on October 25, 2015
Verified Purchase
This book continues the story as Arun leads his motley band of fighters through more adventures. It is the third book in the series and they gather pace with each book. There are so many characters with strange names that I found it essential to keep on referring back to the earlier books to help me to remember who they were and how they fit into the stories. It is hard to describe how one starts to believe that the story is real when we know that it is set many centuries ahead. However whilst reading the book I started to believe that I was there trying to help the cause of Freedom. The stories bring back memories of my military service and how proud I am that I wore the shoulder flash of the Desert Rats so many years ago in BAOR. Very well written and a jolly good read.
Read more
2 people found this helpful
Report abuse

William J. Fox
5.0 out of 5 stars Hard Hits
Reviewed in the United Kingdom on July 27, 2015
Verified Purchase
This is what the second novel should have been. The plot flows well and I found it difficult to put down. If I have any criticism it is that too often everything turns pear-shaped for the humans and the outcome can be quite depressing. On the plus side the marines do eventually come out on top against the Hardits. A final point, I felt the novel stopped rather than ending. The path is left open for the fourth in the series but I felt it was more of a cop-out than a cliff-hanger which is what the author probably intended.

If I seem a bit harsh, well, I've been reading sf for over 50 years and I have high expectations of anything I give my time to. The next novel could make or break the series but I have high hopes of someone I consider to be a good writer.
Read more
One person found this helpful
Report abuse

Frank
5.0 out of 5 stars Renegade Legion
Reviewed in the United Kingdom on June 11, 2015
Verified Purchase
The more I read the more I enjoy. The action sequences are very impressive, the old soldier in me is more than a little jealous.
The character traits are well woven by this innovative author. If only I could enlist.
Read more
One person found this helpful
Report abuse

eric the red
3.0 out of 5 stars last of the few, not likely
Reviewed in the United Kingdom on July 1, 2015
Verified Purchase
a continuation of the human legion series, may seem slow to others but is an in depth storyline which flows with twists and turns, it kept me quiet for a few hours. recommended!
Read more
One person found this helpful
Report abuse