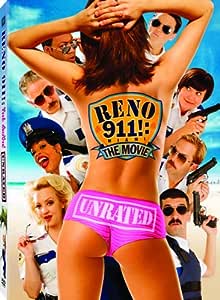 The story centers on a rag-tag team of Reno cops that are called in to save the day after a terrorist attack disrupts a national police convention in Miami Beach during spring break. They're not the best, but that's all we got. Based on the successful Comedy Central TV series.

For Reno 911 fans who believe that Comedy Central's improv-driven mock-reality series could benefit from more unbleeped profanity, uncensored sex scenes, and nudity, the feature-length R-rated Miami will be just the ticket. Perhaps less a movie than it is a Very Special Episode, Miami transplants short-shorts-bedecked Lt. Dangle (Thomas Lennon) and company to Miami for the American Police Convention ("They invited everybody"). No sooner can you say "bio-terrorism" than the hotel is quarantined, and Wahoe County's hapless misfits, shut out when their credentials can't be found, must step in and save the city from "complete chaos." Complete chaos ensues. As with the series, Miami unfolds in a series of hit and miss bits. The funniest are those that hew closest to the Cops template, such as an early "814" call that does not, as the officers believe, decode as armed intruder, but actually involves a loose chicken, and an encounter with a taunting good ol' boy who, when faced with an alligator in a swimming pool, boldly goes where officers Jones (Cedric Yarbrough) and Garcia (Carlos Alazraqui) fear to tread.

Happily, as was not the case with Borat, no innocent or unsuspecting citizens were emotionally harmed during the making of this movie. All of the jokes and humiliations are at the Reno squad's expense. Miami benefits from some subtle (and not so subtle) stunt casting, including Patton Oswalt (The King of Queens) in a small but pivotal role as the deputy assistant mayor, and Dwayne "The Rock" Johnson's hilarious, albeit short-lived cameo as a gung-ho bomb squad leader. It is a tribute to the crack ensemble that Reno's intimately etched characters do not need much of an introduction, and can be appreciated by those who have not seen the show. But longtime viewers are issued this warning that Miami crosses with even more impunity the thin blue line of good taste. A Rear Window homage in which we view each officer indulging in some alone time in their fleabag motel rooms may not be as bad as Borat's wrestling match, but really, there ought to be a law! --Donald Liebenson

4.5 out of 5 stars
4.5 out of 5
310 customer ratings
How does Amazon calculate star ratings?
Amazon calculates a product’s star ratings based on a machine learned model instead of a raw data average. The model takes into account factors including the age of a rating, whether the ratings are from verified purchasers, and factors that establish reviewer trustworthiness.
Top Reviews

joel wing
TOP 100 REVIEWER
4.0 out of 5 stars Hilarious raunchy spoof of the reality TV genre
Reviewed in the United States on February 1, 2020
Verified Purchase
Reno 911! was a hilarious TV series on Comedy Central. They decided to turn it into a movie and amazingly it worked. It is a great, raunchy laugh at the reality TV cop genre.

The plot is that the Reno sheriffs are invited to a police convention in Miami. They show up and find out everyone is infected with a deadly disease and they need to keep law in order in the city. As usual, they have no idea what they’re doing. This leads to one hilarious scene after another. One is that Jones and Garcia are called to a house and find an alligator in the swimming pool. The neighbor intervenes and says that they have to treat the gator with respect. It turns out there was another gator in the pool who eats the gator. Another time they find a whale washed up on the beach and have to get rid of the body. First, they try to roll it off the beach but Junior literally falls right into the body. They then decide to blow up the carcass but it leads to whale pots landing all over the beach hitting people. The movie is not just a series of skits like an extended version of the TV show. There's an actual story when the sheriffs find a criminal plot led by Paul Rudd of all people.

One of the successes of both the TV show and the film was that three of the lead characters Lennon, Garant and Kenney-Silver were the writers. They really did an amazing job spoofing the cop show. If you liked the TV series you will love the movie. If you like the film, you need to see the TV show.

Once I couldn't get it to play, I came back here and read the fine print. It says something about how this is a "digital copy" and you have to use some magic number by a certain date. Who has heard of this before when buying movies on disc? Okay fine, it's not a DVD it's a "digital-copy-with-magic-number-by-certain-date" disc. SELL IT IN *THAT* SECTION OF AMAZON INSTEAD OF THE DVD SECTION THEN.

Howard M. Kindel
5.0 out of 5 stars Still Crazy After All These Years
Reviewed in the United States on March 28, 2013
Verified Purchase
It's been several years since I watched "Reno 911." I love the show, so I was a bit fearful the movie wouldn't live up to the show's "standards." As it turned out I had nothing to fear: the zany absurdity that put "Reno 911" on the cutting edge of comedy is alive and well and holed up in Miami, FLA. Anyone who's ever watched the show knows it's not your typical sit-com. It ranks up there with "Stella," "The Kids in the Hall," and "Red Dwarf" as the epitome of sketch comedy. It's not a "feel good" kind of show; it's strictly for laughs. There's rarely a nice, neat little plot that resolves itself by show's end. The good guys don't always come out smelling like a rose; and the bad guys don't always get their comeuppance - and that alone is a turn-off to devotees of conventional comedy: they don't get the point of a show that touches the funny-bone but not the sensibility. A show that doesn't exalt and reinforce society's "norms" is incomprehensible to those who expect their sit-coms to make sense.

All the show's signature sight gags are present and accounted for, just in a different setting. You need only read the DVD cover. The Reno Sheriff Department gets stuck with the task of policing the entire city of Miami, without any help or any backup: there cannot be a greater recipe for total chaos. And if there's one task Lt Dangle and his deputies are up to, it's creating chaos wherever they go. So when they actually save the day - by sheer chance, of course - they become what you might call Poster Children for Chaos Theory.

I haven't detailed any of the particular incidents in the movie because, as with the TV show, the incidents are merely backdrops to the zany, absurd way the Reno team approaches and even sometimes manages to resolve any situation. The whale that washed up onto the topless beach, e.g., could have been anything from a conch shell to a submarine - it makes no difference: Dangle's team would have proceeded exactly the same bumbling way no matter what the obstacle was. And that, of course, is precisely what the show - and this movie - are about. It isn't what actually happens that creates the comedy, it's how they handle what they encounter. These are not characters who grow, or learn from their experiences. They're essentially as one-dimensional as characters can be; so you pretty much know how they'll react to each new problem they encounter. In a word, it's not about Who they are but What they do. You either like that or you don't.

Pete Roche
3.0 out of 5 stars Meh
Reviewed in the United States on November 6, 2014
Verified Purchase
Three stars because it's okay. It's no masterpiece, though.
The Reno Sheriff's Department goes to a national police convention in Miami Beach. Their reservations get messed up and they can't get into the convention center on day one. While they are coping with this there's a bioterrorist attack, the convention hall is sealed off, and there are no cops in the whole Miami area except the idiots from Reno. They get Miami Sheriff uniforms and are drafted to enforce the law. There are good moments, such as a Tony Montana-type drug lord, an alligator in a swimming pool, and so on. There is some nudity, which really does little to improve the comedy or advance the story line. (After seeing Deputy Raineesha Williams in a thong bathing suit I needed a Pepto-Bismol.)
Okay, I watched it. I'll probably give it to someone else; I don't really recommend buying it.

LUKE BATTAMS
5.0 out of 5 stars Mint film
Reviewed in the United Kingdom on September 21, 2014
Verified Purchase
It came on time of the delivery date Reno 911 is a classic comedy film could not stop laughing
Read more
Helpful
Sending feedback...
Thank you for your feedback.
Sorry, we failed to record your vote. Please try again
Report abuse

Page 1 of 1 Start overPage 1 of 1
This shopping feature will continue to load items when the Enter key is pressed. In order to navigate out of this carousel please use your heading shortcut key to navigate to the next or previous heading.
Back
Next
Pages with related products. See and discover other items: 911 movie