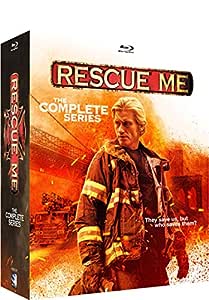 They save us, but who saves them?
For the first time ever, all seven seasons of Rescue Me are available in one complete Blu-ray box set.
From series creators Denis Leary and Peter Tolan, the highly acclaimed Rescue Me galvanized audiences with its uncompromising portrayal of the New York City firefighters of 62 Truck, whose duty to save lives puts their own in constant turmoil - on the front lines, in the firehouse, and at home.
Leary is electrifying in his role as Tommy Gavin, a deeply driven first responder with a combustible personality and personal demons to match. Through seven groundbreaking seasons, we follow his gripping story, along with those of his fellow crew. Provocative, profane, dramatic, humorous, and unflinchingly honest, it is an unforgettable journey of courage, conflict and ultimate salvation.
"This unflinching, darkly funny tale of fires and firefighters is one of the most underrated shows in recent years. Its subject matter is undeniably fresh, fascinating and full of danger: the problems of readjusting to everyday life as a New York firefighter after the devastation of 9/11." Sarah Hughes, The Guardian
"...absolutely brilliant.... the best show on television." David Kronke, LA Daily News
Starring: Denis Leary (The Amazing Spider-Man), Andrea Roth (Netflix's 13 Reasons Why), Daniel Sunjata (ABC's Notorious), Callie Thorne (USA's Necessary Roughness), Steven Pasquale (CBS's Doubt)

4.7 out of 5 stars
4.7 out of 5
701 global ratings
How are ratings calculated?
To calculate the overall star rating and percentage breakdown by star, we don’t use a simple average. Instead, our system considers things like how recent a review is and if the reviewer bought the item on Amazon. It also analyzes reviews to verify trustworthiness.

cherm
4.0 out of 5 stars Great Show
Reviewed in the United States on September 27, 2018
Verified Purchase
weird packaging. You really have to pay attention to which season/episodes disc is next in the box.
I watched the show when it originally aired, looked forward to it every week.
Watching it again, it's still Great! Love It! Sarcastic humor terrific. But can't help but wonder, how'd they get away
with the profanity? Or the sex scenes? ON TV! haha! I don't remember noticing that before. I guess the times they
are a-changin'. It's a Great Show. I've re-watched it all except the final season - I know how it ends - and as when it originally aired - I don't want it to end.
But I guess that's what makes a Great Show so Great. They never "Jump the Shark".

Robert W Kenney
5.0 out of 5 stars Excellent Series
Reviewed in the United States on April 8, 2014
Verified Purchase
I don't know how anybody feels about Dennis Leary, I like him. The series was about a firefighter who suffered from PTSD after 9/11. I had a buddy, Tommy Butler, Firefighter, Squad Company 1, Park Slope, Brooklyn. He and his entire group that day were killed. They never found his body. His family buried an empty casket. I was drawn to the series because of that. I found that Mr. Leary did a damned fine job. I thank him.
Read more
62 people found this helpful
Helpful
Comment Report abuse

R. DALY
5.0 out of 5 stars Why so many episodes at the end in the sixth and final seasons?
Reviewed in the United States on June 7, 2017
Verified Purchase
I watched every episode of this show when it was on TV and I loved it, so I was thrilled to finally be able to buy the box set of the entire series. I have a question though about the box set. I have been ripping the disks to .mp4 files to put on an external USB drive which I have hooked to my TV. I do this to all my DVDs so I can rip them once then store them away. I rip them then name the episodes just like they're listed in the guide that came with the box set. However, when I got to "Season 6 and the Final season", which according to that guide, there's supposed to be 19 episodes, 10 in season 6 and 9 in season 7. But when I finally got through ripping them, the last five disks contained 39 episodes. Can someone tell me why? What are all these extra episodes? I don't even know where to start naming them as there are 20 more episodes than from what I can tell there's supposed to be. Thanks for any help.
Read more
6 people found this helpful
Helpful
Comment Report abuse

🐱Mrs Kitty
5.0 out of 5 stars GET READY FOR A HELLUVA RIDE!
Reviewed in the United States on August 6, 2020
Verified Purchase
OMG! SOMEONE PLEASE RESCUE TOMMY GAVIN FROM ALL OF THE CRAZY PEOPLE! Talk about a bunch of crazy,back stabbing,using,abusive,deranged,hilarious and loving people! LOL! This was,is a great show! Yes it has cussing,bad language, sexual scenes, mentally unstable people,humor and more but welcome to real life! If real life offends you like I've noticed it has a few other reviewers then no you don't want this show! But if watching real life craziness doesn't offend you then get ready for a helluva ride! Because this series is exactly that! A WILD RIDE! And Dennis Leary does a great job playing Tommy Gavin and taking you on a ride you want soon forget. A firefighter who survived one of the worst tragedies ever to happen in the United States. But Tommy Gavin is supposed to be the unstable one in this show because of what happened to him and his fellow firefighters on 9/11. But to me it's all of the other people he has to deal with in life who are the unstable,crazy people! Lol! Janet Tommy's wife is a real B just like several other women in this show. Want,want,want me,me,me. Men need to work several jobs,a lot of hours to give women,their wife what they want, a good life by providing them with what they want when they want it. But men are also supposed to be home all of the time,spend time with their wife to keep their wife happy. According to Janet Tommy Gavin's wife. And if one can't do it then two might lol. This is a show where you don't know what's going to happen from one minute to the next. It's hilarious and sad. It does really make you think about what really happened on 9/11. It also makes you wonder if we have been told the truth,know the truth about what all did actually happen on 9/11. Because I along with a lot of other people don't think what we have been told and witnessed on 9/11 is the whole truth,what really happened. There is to many unanswered questions. Main one is how the twin towers came down like they did from being hit by planes. No I'm not a conspiracy nut but I have seen a lot of buildings that's been purposely brought down by explosives that came down exactly the way the twin towers came down. Straight down. I watched the towers come down that day on 9/11 like millions of other people. It's a vision I will keep in my mind the rest of my life and knowing the true evil that exists in the world. I also think Dennis Leary is a very underrated actor. A lot of people will,did love this show and some didn't. Like I said. If your easily offended by bad language you want like this show. If not then you will love this ride! My heart goes out to all of the families who were personally affected by this attack,hurt,lost loved ones. God Bless you all and our COUNTRY!
Read more
Helpful
Comment Report abuse

Honeybadger
5.0 out of 5 stars Great series
Reviewed in the United States on September 4, 2019
Verified Purchase
Watched this a couple years ago, the girlfriend and I wanted to watch it again but netflix had taken it away. Seen the deal that Amazon had on this series and jumped on it. This series has everything anybody could want, action, comedy, drama. Would recommend
Read more
3 people found this helpful
Helpful
Comment Report abuse

Amazon Customer
1.0 out of 5 stars Don’t buy!!
Reviewed in the United States on November 27, 2018
Verified Purchase
The most disgusting language but the main actor. Soap wouldn’t even be enough to wash out his nasty mouth. Because of our try of this series I can’t stand anything that guy stars or even acts in—blah!!!
Read more
6 people found this helpful
Helpful
Comment Report abuse

D. Bagwell
5.0 out of 5 stars A helarious yet gritty and Realistic look at the lives of Firefighters.
Reviewed in the United States on August 23, 2018
Verified Purchase
This show pulled no punches, and never blinked when it looked at hard things, It was often criticized by the PC crowd, but was hailed by firefighters all over the nation I personally place far more value in the opinions of the guys who run INTO burning buildings over the SJW crybabies... if you do too this is the show for you. but SJW's should look elsewhere.
Read more
3 people found this helpful
Helpful
Comment Report abuse

Tomcat
5.0 out of 5 stars If you're a fan of the show, you need this box set.
Reviewed in the United Kingdom on September 21, 2013
Verified Purchase
I first watched this series purely because of Dennis Leary and quickly loved the show. As a fan of his stand up act I was surprised to see what a good actor he is. I got fed up of waiting for British TV to show anything other than seasons 1 & 2, and even Blockbuster didn't have it, so I decided to invest in this complete box set and haven't regretted it.

One word of warning. There are a lot of great extras and cast interviews, but there tend to be a lot of spoilers. Avoid the temptation and watch them only after completing each season.
Read more
7 people found this helpful
Report abuse

Paul Thackeray
2.0 out of 5 stars Review of the Box set not the show
Reviewed in the United Kingdom on September 16, 2014
Verified Purchase
I shouldn't have to tell you how good this show is so I'll pass on my opinion of the Box set. At first glance it looks the part but it goes downhill fast, you pull out a hefty card inner covered with artwork/photos of the characters which folds out like a butterfly once and then the top cards open again on each side to reveal the discs divided across two spools with a plain card "stop" to prevent them from falling out. I guess your now thinking (as I did) at least they thought of saving space on my DVD rack but no it doesn't even fit in standard DVD shelving/storage, my advice would be buy the seasons individually or be prepared to buy some DVD cases the latter of which I have now done.
Read more
2 people found this helpful
Report abuse

susan
5.0 out of 5 stars Brilliant series
Reviewed in the United Kingdom on June 10, 2020
Verified Purchase
This was delivered earlier than stated , very funny and heart felt series . Make sure you have a multi- region DVD player .
Read more
Report abuse