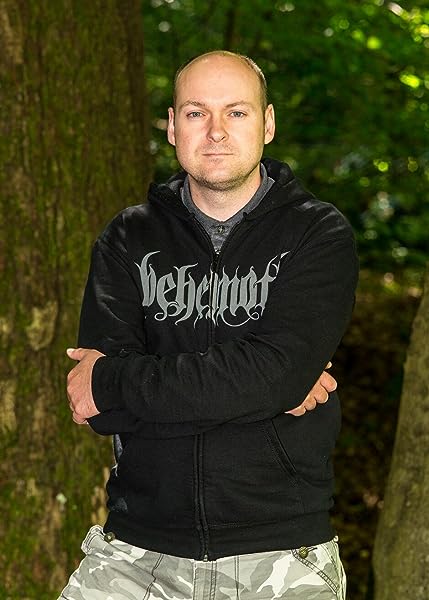 The Rescue And Other Tales: includes The Escape and The Prisoner (The Forest Lord) Paperback – September 28, 2017

by Steven A. McKay (Author)
4.4 out of 5 stars 8 ratings
Part of: The Forest Lord
See all formats and editions
Sorry, there was a problem loading this page. Try again.

Three short but powerful tales from the bestselling Forest Lord series, two of which are in the exclusive Kindle Singles Program, now published in paperback. If you loved Wolf's Head and want to read more about the same wonderful cast of characters, this is for you!

All he wanted was a quiet drink…
It’s spring, 1323 AD, and John Little, notorious outlaw, seeks to forget his troubles in a Barnsley alehouse. He didn’t count on the place being packed to the rafters with drunk, belligerent Scottish mercenaries though. This stand-alone Forest Lord tale sees one of England’s favourite sons in a battle for his very life that will hugely entertain all lovers of action and adventure.

"A short tale of Little John that packs a wallop as vicious as his quarterstaff!" - Parmenion Book Reviews

ENGLAND, AD1325 - When two lawmen are sent to a snowy English village to arrest a vicious rapist it seems a straightforward task, but is all as it first appears?
As Robin Hood and John Little, legendary former outlaws themselves, take the criminal into custody they find the people of Stapleford accommodating enough. The terrified victim's bruises are plainly, painfully, visible and a local nobleman confirms her accusations. As they set off on the road back to Nottingham the lawmen's disgust for their captive's actions colours their opinion of him, and John soon has to be restrained from brutally assaulting the man. The harsh winter conditions slow their journey though, and eventually the prisoner's words and desperate, violent actions have the lawmen questioning what's really been happening in Stapleford...Can Robin and John complete the mission they've been given, or will their own innate sense of justice lead them down an unexpected path? Fans of the bestselling Forest Lord series will love this exciting stand-alone tale that cleverly explores the themes of morality and justice in medieval England.

When a faithful friend goes missing from an English village it's up to an unlikely hero to find out what's happened in this action-packed tale.

"Once again Steven A. McKay delivers a story that, although short, hits like an arrow in the guts." - Stuart S. Laing, author of Jezebel's Chains

Steven A. McKay was born in Scotland in 1977. His first book, "Wolf's Head," came out in 2013 and was an Amazon UK top 20 bestseller. "Blood of the Wolf" is the fourth and final novel in the Forest Lord series which has over 100,000 sales so far. Steven is currently finishing off a brand new novel, The Druid, set in post-Roman Britain.

I was born in Scotland in 1977 and always enjoyed studying history – well, the interesting bits, not so much what they taught us in school. I decided to write my Forest Lord series after seeing a house called “Sherwood” when I was out at work one day. I’d been thinking about maybe writing a novel but couldn’t come up with a subject or a hero so, to see that house, well…It felt like a message from the gods and my rebooted Robin Hood was born.

My current Warrior Druid of Britain series was similarly inspired, although this time it was the 80’s TV show “Knightmare”, and their version of Merlin that got my ideas flowing. Of course, the bearded old wizard had been done to death in fiction, so I decided to make my hero a giant young warrior-druid living in post-Roman Britain and he’s been a great character to write.

In 2021 the Xbox/Playstation/PC game HOOD: Outlaws and Legends was released, featuring my writing. I did the character backstories and the lore for the maps and collectables and it was such a fantastic experience!

I was once in a heavy metal band although I tend to just play guitar in my study these days. I’m sure the neighbours absolutely love me.

Check out my website at stevenamckay.com and sign up for the email list – in return I’ll send you a FREE short story, as well as offering chances to win signed books, free audiobooks and other quite good things!

And don't forget to hit that FOLLOW button on the left there...

katherine e.
5.0 out of 5 stars Robin Hood Tales In Paperback For The 1st Time!
Reviewed in the United States 🇺🇸 on December 31, 2017
Verified Purchase
Fans of Steven A. McKay's Forest Lord series, and new readers alike will enjoy The Rescue and Other Tales.

This collection, published for the first time in paperback, contains "The Escape" featuring Little John; The Prisoner featuring Robin Hood and Little John; and "The Rescue" featuring two other friends of the outlaw gang.

Each tale is a fun, fast paced, "mini" adventure with enough surprise and punch that is not only worthy of the fist or quarterstaff of a wolf's head, it is satisfying to the reader!

gandalf
5.0 out of 5 stars Brilliant short stories
Reviewed in the United Kingdom 🇬🇧 on November 25, 2020
Verified Purchase
As always excellent reading from this author could not put down till I finished the book lucky only a short one or I would have been alight love this authors work A1
Read more
One person found this helpful
Report abuse

Mark I. Grant
4.0 out of 5 stars Fun quick "Robin Hood" reads
Reviewed in the United Kingdom 🇬🇧 on December 1, 2020
Verified Purchase
3 lovely little stories, simple but charming perfect for waiting for the kettle to boil on a chilly morning
Read more
Report abuse

presterjohn1
5.0 out of 5 stars Three Tales From The Age Of Robin Hood
Reviewed in Canada 🇨🇦 on November 25, 2017
Verified Purchase
I had read two of these shorter Forest Lord stories before, but I discovered "The Rescue" here for the first time. These stories deliver on what could be considered Steven A. McKay trademarks: fast pacing and strong action. The Little John solo story, "The Escape", cleverly pits the outlaw against two outsiders who aren't overawed by the mystique locals attach to Robin Hood and his giant lieutenant with a clever twist at the end. "The Prisoner" takes place in a different phase of the saga when Robin and John are lawmen charged with conducting a charged criminal to the seat of justice, but nothing is quite as it seems. "The Rescue" follows Robin's wife and sister through an equally dangerous adventure of their own. All in all, this is a satisfying little collection and both closes the Forest Lord saga and whets the reader's appetite for McKay's next series.
Read more
Report abuse
See all reviews