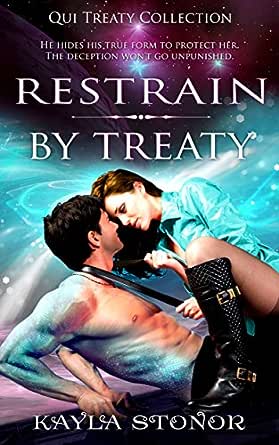 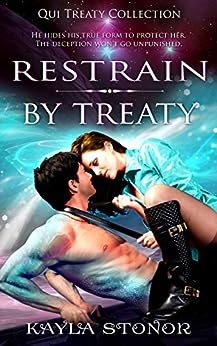 3.7 out of 5 stars
3.7 out of 5
26 global ratings
How are ratings calculated?
To calculate the overall star rating and percentage breakdown by star, we don’t use a simple average. Instead, our system considers things like how recent a review is and if the reviewer bought the item on Amazon. It also analyzes reviews to verify trustworthiness.
Top reviews

Kindle Customer
5.0 out of 5 stars Holy alien hotness. Sweetest alien love story of all time!
Reviewed in the United States on April 27, 2015
Verified Purchase
Captured and sold to flesh traders, captain Bea Solomon now finds herself in a brothel that caters to a clientele that revels in abuse and depravities no human being is meant to endure. Arden is Qui and the very embodiment of all that Bea loathes and fears. Despite the less than ideal situation, it’s his task to retrieve Bea and bring her safely to his Empress, where she is to rendezvous with her colleagues before she is to be repatriated back to Earth. Witnessing her reaction to his true shape, he assumes human form to spare her sanity, but soon finds himself trapped in an impossible lie as their mutual attraction becomes too hard to ignore. Little does Bea know the man who allows her to tie him up, who understands her need for total control after her traumatic captivity, is battling a daily war to retain a human form, who denies his inner Qui’s cries for release for her sake only.

Restrain by Treaty is my favorite installment in the Qui universe to date. The lengths Ardent goes to, just to prove his devotion to this broken human female, is unbelievably heartwarming, selfless and sweet. Ardent willingly accepts everything Bea dishes out; her hatred, her sorrow, her revenge and her passion. The scenes involving restraints (both of mind and body) were as fulfilling to me as they were for Ardent and Bea;-) My favorite moment (among many) was definitely their culmination scene. It couldn't have been more perfect.

Aside from the beautiful love story, I also enjoyed the implications that human pheromones seem to attract not only the ruling Qui at a visceral level, but drive their rivals, the Surashan to a mating frenzy as well. Something tells me that the imperial visit to Earth could get very interesting indeed…

I can only fins one fault with this story. And that is: Why on Earth is it not availablw in paperback as well? This book should have been proudly featured on my creme-de-la-creme shelf. One can only hope and pray that it will be available in a paperback anthology with the other Qui treaty novellas as soon as the stories have all been published!

Frankly there aren't enough stars in the Milk Way to describe how much I loved Ardent. So get ready to swoon, people!

Why
1.0 out of 5 stars I wouldn't say I hated it... DIDNT LIKE IT.... AT ALL..
Reviewed in the United States on May 27, 2015
Verified Purchase
Honestly , for me two stars feels too much, I like a book and interests no book in the Fem-Dom type Genre but I like/love the books that treat the person I n the s part of the D/s type relationship with love and affection and care and ppl who are into BDSM AND D/s relations because it's what works for them and on some level for some reason it fulfills a need or needs they have that can only be satisfied this way... A sub who's a Sub because it's THEIR nature and THEIR need (not because like in Way too many books where the female is a sub. She's seduced and or manipulated into being an almost unwilling participant in these sex games because of how her hormones react to her Dom. Type BF because he keeps panties perpetually damp/soaking soo she does/gives into things she's not always sure she wants just to please him) ( I ca t stand these books where a overly powerful man has an insatiable need to dominate and control and the weak willed woman totally gives in with out a fight coz he keeps her panties wet, nor would I want the same thing done to a man) only usually if it's not a good and loving situation the female Domme books are worse where men are raped and humiliated and tortured and degraded, I haven't read those books because between the desc. And the reviews they sound sick, not sexy and definitely NOT Romantic! Why would any one want a book like that ? Women who hate men? Men who hate themselves? A good Dom. From what I've read and feel should always do what they do in love and because it's what's best for the Sub.s needs and wants, trying to be as unselfish as possible, and thou it's not for me ( thou I must admit having the odd fantasy of being a Domme to a sexy and Willing alpha type male maybe once or twice ;) but never the violent type unless giving him a good spanking would considered violent ;) )
Neither role of the D/s is always easy I'm sure ,finding that perfect balance of pushing each other's limits and the whole give and take of it, but no matter how unusual it all seems it can be a healthy way for some ppl to live I think, but forced dominance and violence is NOT MY THING.... And while Bea was forced to suffer atrocities none of us really want to contemplate this book and all the violence just wasn't my thing I didn't like it at all and then being reminded when we see General Jaden ( a character from a book that REALLY felt to violent to read) that the Qui's seeming benevolence toward Earth is ONLY in place as long a this seemingly strong man is willing to stay the empress's faithful sub./pet or our whole Damn planet will have to quote "be taught a lesson" ... WTF ?!?!?!?! Either this man is a willing slave/sub./ pet to used how ever she pleases ( yeah read about the m/m action from a review m/m is not my thing :( ) or Earth pays ? What's with all the uber over dominance crap ?
No thanks ! Keep all the overly violent dominance too your self...
Read more
One person found this helpful
Helpful
Comment Report abuse
See all reviews

aprilfool200
5.0 out of 5 stars Space Sex
Reviewed in Canada on April 23, 2015
Verified Purchase
This book was given to me in exchange for a honest review. I have to say the Author has hit it out of the park again. In this episode we find that Bea Solomon has been sold as a sex slave and the Qui are to rescue her. Bea has been abused beyond believe and her companion Ardant helps her heal on their way to the home-world.The way the author handles Bea's sex abuse is right out of the handbook and leaves her Dignity intact.
Read more
One person found this helpful
Report abuse
See all reviews