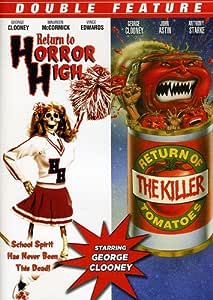 Return to Horror High/Return of the Killer Tomatoes

Return to Horror High: In 1982, Crippen High School was the scene of a series of brutal murders. The killer was never caught. Now, a low-budget film crew that includes an ill-fated leading man (George Clooney), the pretentious director (Scott Jacoby), a lecherous producer (Alex Rocco) and numerous nubile actresses have all returned to Crippen High to film the story of what actually happened. But when members of the production are stalked and slaughtered one-by-one, it appears that the depraved maniac is back. Who will survive the massacre? And what will be left of their careers? Vince Edwards and Maureen McCormick (Marcia from The Brady Bunch) co-star in this bloody body-count shocker in the tradition of Scream and Scary Movie, filled with all the gore, gags and gratuitous nudity that made the ‘80s a paragon of cinema excellence.

Return of the Killer Tomatoes: It’s been 25 years since the Great Tomato War, and tomatoes are still banned throughout the country. But a terrible plot is being hatched. Evil Professor Gangrene (John Astin) is hard at work in his laboratory, turning tomatoes into perfect human replicas designed to help him take over the world! Will the lecherous professor succeed with his bizarre plan? Can the superhuman vegetables-in-disguise fool the trained eye? Can even the Killer Tomato Task Force stop the insidious onslaught? Find out in the stunning conclusion of Return of the Killer Tomatoes.

4.5 out of 5 stars
4.5 out of 5
211 global ratings
How are ratings calculated?
To calculate the overall star rating and percentage breakdown by star, we don’t use a simple average. Instead, our system considers things like how recent a review is and if the reviewer bought the item on Amazon. It also analyzes reviews to verify trustworthiness.
Top reviews

Einsatz
TOP 1000 REVIEWER
1.0 out of 5 stars “Tomatoes are evil.”
Reviewed in the United States on July 21, 2020
Verified Purchase
I had an immediate, visceral reaction to this movie…and ‘hate’ isn’t a strong enough word to describe my reaction, especially considering how much I liked the first film. I was stunned, mute, not a single laugh. In fact, I almost fell asleep a fourth of the way through. I kept checking the time―is it over yet! The songs were dreadful, all of the actors mugged shamelessly, they showed far too many scenes from the first movie and then tried to make a joke of it. Trying to save money is no laughing matter. It didn’t help that I am not a fan of John Astin, who cackled enough to lay a dozen eggs as the mad scientist creating tomato-people. And a stalker mime…for pity sake!!! Watching this ruined my day. And my day was already half over.
Read more
Helpful
Comment Report abuse

Angry Aaron
3.0 out of 5 stars no comparison to the first
Reviewed in the United States on July 11, 2020
Verified Purchase
movie overall is fine but lacks the genius on the first. mostly commercial nerf satire. see the return of many characters, some are not mentioned though (black guy returns but woman does not...). feels a lot like a money grab trying to play off the popularity of the previous film
Read more
One person found this helpful
Helpful
Comment Report abuse

Michael Valdivielso
5.0 out of 5 stars FT, FT, FT!
Reviewed in the United States on July 30, 2006
Verified Purchase
Return Of The Killer Tomatoes is a film about many things. Product placement, TV news, big breasted babes in bikinis, Michael Jackson, Miami Vice, the Pope, scams, peanut butter on pizza and many other fads of the 80's. Starring such greats as George Clooney, John Astin and, of course, Karen Mistal (who has the best bottom of any B-movie actress I have ever seen) this is NOT as funny as the first but still has a ton of laughs within its many scenes.

But under all the humor is a serious view about how people felt about the last, closing years of the Cold War against Communism. In a time when the Red Menace was seen as giant ants or aliens from space the director was brave enough to show that not all Communists, who were represented by the tomatoes, were bad. Chad, the always confused main male character, falls in love with Tara, a tomato-woman(but then who won't fall in love with a smart, willing, good cooking, great dressing tomato?). And FT, played by FT,(who as we all know become a huge star in the film industry as while as live theater in Europe), starred as the socialist with a heart of gold, who was even willing to put his own life in danger for the American way of life. THIS is a B-MOVIE to beat all B-movies. And remember, Tomorrow IS another day!
Read more
16 people found this helpful
Helpful
Comment Report abuse

Robin Wahlberg
5.0 out of 5 stars It's silly, I know. But just go for it!
Reviewed in the United States on January 26, 2019
Verified Purchase
Where do you find silly scary movies? Amazon of course. B rated movies can always be found here and be a lot of fun.
Read more
Helpful
Comment Report abuse

Richard The Buying Hearted
3.0 out of 5 stars Tomatoes Is Great Fun....Horror High is pretty dull but has its moments.
Reviewed in the United States on September 10, 2009
Verified Purchase
Killer Tomatoes holds up really well. Funny and off the wall, especially the great John Astin. Return to Horror High has lost most of it's punch, except for the early demise of George Clooney (boy...if they'd only known!) and the ending and of course the inclusion of Marcia! Marcia! Marcia!. The pace is horribly slow. There is one thing that they included as a joke, when the crew runs out of money, they make hilarious use of 'product placement" to make up the shortfall. Boy were they prophetic!!!!!!. Last but not least, Alex Rocco, is the quintessential slimey "B" movie producer!
Read more
2 people found this helpful
Helpful
Comment Report abuse

L.J.
5.0 out of 5 stars This should have been George's first Oscar-nominated performance!
Reviewed in the United States on June 22, 2016
Verified Purchase
By far George Clooney's best performance on film, bar none! The fresh face, the mullet hair, the run on the beach and of course, avoiding those 'killer tomatoes' makes this film 'almost' all about George. Well, actually, he's only a pretty face in it but hey! I ain't complainin'!
Read more
One person found this helpful
Helpful
Comment Report abuse

William d Knight
4.0 out of 5 stars You gotta buy this movie.
Reviewed in the United States on June 12, 2018
Verified Purchase
I watched this movie years ago and found it here at Amazon. This is the movie that gave George Clooney his start. This movie is hilariously funny especially the first time.
Read more
Helpful
Comment Report abuse
See all reviews

starlightspacelab
5.0 out of 5 stars Clooney's Mullet
Reviewed in the United Kingdom on July 24, 2016
Verified Purchase
This is a killer tomatoe must have in the Arrow Video catalogue. This one is so hilarious. So funny. And there is love. A guy falls in love with a woman (SPOILER ALERT) which is actually a tomato. And most important of all George Clooney way back then had a mullet. His hair is typical 1980ies style. Short along the ears, long in the neck : a mullet. We call it a "nektapijt" (carpet for the neck) in the Lowlands. I do hope Arrow Video will be able to release the first movie. This is highest possible tomato killer must have !
Read more
2 people found this helpful
Report abuse

Alza
5.0 out of 5 stars Classic
Reviewed in the United Kingdom on October 4, 2013
Verified Purchase
even though the first movie went down in history of being the worst, the sequel makes fun of this and even though its better quality
and shot with a bigger budget it does'nt take its self too seriously and keeps you entertained throughout.. worth it! for a cheesy laugh!
Read more
One person found this helpful
Report abuse
See all reviews