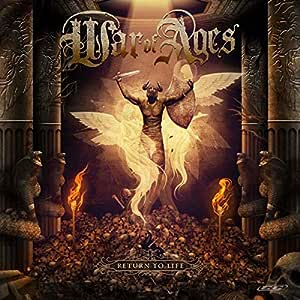 War Of Ages have re-signed with Facedown Records for the release of their fifth album, "Return To Life". With tour history alongside of As I Lay Dying, Underoath, Demon Hunter, Between The Buried And Me, Soilwork, and Norma Jean; War Of Ages have proven to be one of the hardest working bands in the metal scene. "Return To Life" was recorded with and engineered by Zeuss at Planet Z Studios who has also worked with some of metal's top bands such as Shadows Fall, Hatebreed, All That Remains and Chimaira.

TempestSurvivor
5.0 out of 5 stars Timeless Rock Legends
Reviewed in the United States on September 12, 2015
Verified Purchase
I am 55 years old and have been a Christian for over 40. I love the Christian Metalcore sound, and nobody does it better than War of Ages. I used to promote "Christian rock concerts" in the 80's, but Rez band, Servant, etc, couldn't hold a candle to this band. Their association with Facedown records has helped them, and the label is signing a list of new groups, no doubt helped in part by WOA success. They have to be good at what they do as secular radio won't play them, Christian stations won't play them, and the large big box stores don't handle their music. Despite these 3 strikes, they have been together since '92 and sound better now than they did before. If you hate Killswitch Engage, don't buy War of Ages. I saw them in concert, and far prefer WOA. Of course, that's just my opinion, and I'm sure others could draw a better parallel. I love the News Boys and Skillet, too, but prefer War of Ages.
Read more
2 people found this helpful
Helpful
Comment Report abuse

Clifford G Lewis Jr
5.0 out of 5 stars As Close to Perfection as it Gets
Reviewed in the United States on May 20, 2012
Verified Purchase
War of Ages has always been a band that I enjoyed, but never made the commitment to buying a full album from them. That is, until I hear the single from "Return to Life", and my opinion was changed; and for the better. This album is ridiculously good! Most albums you buy these days have 2, maybe 3, songs that you can jam to and enjoy; but that's it. It's quite the contrary on "Return to Life". Every song is executed amazingly and the songs flow seamlessly into each other. The album is so good, I've actually listened to it, all-the-way-through, 5 times in one day. For bigger fans of WoA, this album could be played even more given its play time (right around 34 minutes). The one low point of the album is the track 'M.E.B.', but is still a great instrumental.

Cons:
Play time is shorter than I had hoped for

Great album and I recommend it to everyone who is a metal fan, WoA fan, or a fan of Christian Metal - 5/5

Brandon
5.0 out of 5 stars Buy every album, you won't regret it!
Reviewed in the United States on April 24, 2014
Verified Purchase
I'm don't write reviews for music unless it REALLY piques my interest. War of Ages has done JUST that. As an avid metalcore fan, I tripped across them on Pandora a while back while I was at work listening to Avenged Sevenfold, All That Remains, As I Lay Dying, We Came As Romans, et al, and kept finding myself opening my Pandora window to see "Who does this awesome song!?" and it was time and time again War of Ages playing. I've since purchased every single one of their albums and each and every single song is it's own aural symphony of shredding, deeply characteristic drums, and powerful vocals. Not one song deserves recognition more than the other, because they all go as hard as possible. You will absolutely not regret purchasing every single album these guys have made. I listen to War of Ages when I'm in the gym and I find myself nodding my head and really getting amped up for each next rep and set and going with an intensity that doesn't often get brought about by music alone. These guys are a POWERFUL band that throws everything they have at you with each and every. single. song.
Read more
2 people found this helpful
Helpful
Comment Report abuse

legolas8884
5.0 out of 5 stars War of Ages
Reviewed in the United States on November 23, 2013
Verified Purchase
War of Ages has done it again. I believe this band is one of the most underrated bands of our time. These guys know how to jam to such great lyrics. I've been a fan of all of their work so far, and this one does not disappoint!
Read more
Helpful
Comment Report abuse

M. Jackson
5.0 out of 5 stars Killer unapologetic Christian Metalcore
Reviewed in the United States on March 28, 2013
Verified Purchase
These guys are amazing musicians sold out for Christ. If you like Metalcore and you don't have a problem with Christianity, then you won't be disappointed with this album. Very engaging song structure with some very unique and tasty guitar solos. Overall a very solid and energetic album.
Read more
Helpful
Comment Report abuse

Albert V. Peri
5.0 out of 5 stars nice music!
Reviewed in the United States on March 13, 2013
Verified Purchase
I enjoy listening to the music alot.Good for easy listening and relaxing. Good for relieving stress and anxiety in my life.
Read more
Helpful
Comment Report abuse