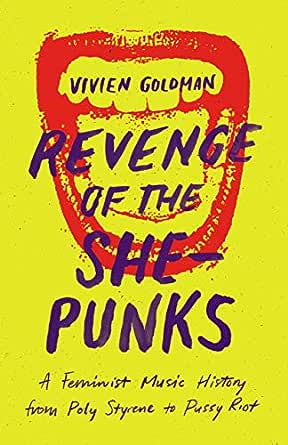 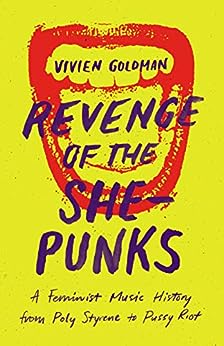 Revenge of the She-Punks: A Feminist Music History from Poly Styrene to Pussy Riot Kindle Edition

Born in London, Vivien Goldman has been a music journalist for more than forty years and was the trusted chronicler of Bob Marley and Fela Kuti. She was a member of the new-wave bands Chantage and The Flying Lizards; Resolutionary, a retrospective compilation album of her work, was released in 2016. She is an adjunct professor teaching Punk, Afrobeat, and Reggae at New York University, where the Vivien Goldman Punk and Reggae Collection is archived in the Fales Library. A former documentarian, her five previous books include The Book of Exodus: The Making and Meaning of Bob Marley and the Wailers’ Album of the Century. Goldman co-wrote the book for Cherchez La Femme, the Kid Creole musical that premiered at the La Mama Theatre in NYC in 2016.

"This book should restore Goldman's place in the rock-crit firmament just as she sets out to give punk's women their long-denied dues." ― The Guardian Published On: 2019-05-13

"Revelatory…[Revenge of the She-Punks] feels like an exhilirating conversation with the coolest aunt you never had, as she leaps from one passion to the next." ― Rolling Stone Published On: 2019-05-30

"Goldman…tells the fascinating tale of how feminist punk evolved…It’s a decades-long story full of radical women making their own noise." ― Rolling Stone, "Best Music Books of 2019" Published On: 2020-01-01

"While Goldman jumps around, hopping from band to band, she places the female musical foment within the critical context of feminist theory and the cultural context of society’s upheaval...Known as the 'Punk Professor' as an adjunct at NYU, Goldman extends her authority here." ― Kirkus Published On: 2019-02-03

"[Revenge of the She-Punks] doesn't just retell the story of punk with an added woman or two; it centers the relationships between gender and the genre, showing how, through the right lens, the story of punk is a story about women's ingenuity and power." ― NPR Published On: 2019-05-07

"Revenge of the She-Punks is an engaging and politically charged exploration of women in music looking to the past, present, and future." ― Bust Magazine Published On: 2019-05-08

"A distinctive look at [punk]…For fans of punk as well as a wider audience of music lovers, feminists, and social historians curious about the genre and its far-reaching influence." ― Library Journal Published On: 2019-03-01

"Alongside musician interviews with the likes of Kathleen Hanna and Patti smith, the engrossing read leans on the unmatchable source of Goldman herself, who participated in punk's genesis as editor of London weekly Sounds." ― Austin Chronicle Published On: 2019-04-26

"Goldman offers a seamless mix of personal memoir, historical detail, direct interviews with the musicians, and her own academic analysis…[a] seriously excellent treatise. Revenge of the She-Punks is not to be missed." ― PopMatters Published On: 2019-05-21 --This text refers to the paperback edition.

"In this witty, must-read introduction to punk music (complete with generously curated playlists), Vivien Goldman sifts through decades of firsthand encounters with feminist musicians to identify how and where these colorful she-punks have arrived--and where they might be headed." -- Tina Weymouth, Talking Heads, Tom Tom Club --This text refers to the paperback edition.
Read more

matty creen
5.0 out of 5 stars An illuminating book
Reviewed in the United States on December 8, 2019
Verified Purchase
Perfectly written and with tons of classics and tons of newer bands, this book stands apart from so many others. Not only for its amazing content, but Goldman really writes exceptionally well. Loved this
Read more
One person found this helpful
Helpful
Report abuse

Raya Streater
5.0 out of 5 stars Bondage Up Yours!!!
Reviewed in the United States on October 3, 2019
Verified Purchase
I think this book is an important read for any female looking into taking on the music industry, or anyone looking for new female empowering music!
Read more
Helpful
Report abuse

Pete Shelton
5.0 out of 5 stars The Punk Professor shows how it's done
Reviewed in the United States on October 11, 2019
Vivien Goldman is an alumna of one of the most fertile periods in pop music journalism, writing in London during the thrilling social and artistic turmoil of the first punk era. Her passion for the music and its creators has never left her. In fact it has only evolved and refined with time. A musician as well as a writer, Goldman takes us through the history of a punk feminism, that in retrospect seems so logical a form with which to express the profound changes affecting young women during the past half century. Perhaps Goldman's most striking revelation is the international spread of the she-punk.; in South America, Africa, Asia and of course in Pussy Riot/Putin's Russia, women's voices are co-opting a music and attitude that has never lost its ability to put a finger up in the face of the Babylonian patriarchy. Like all the best teachers Goldman (NYU"s 'Punk Professor') contextualizes her analytical focus with personal, anecdotal stories of her own life that keep the reader engrossed and entertained - she is really a delightful guide and companion. This is a must-read for anyone that appreciates the social and political power of popular music and culture.
Read more
One person found this helpful
Helpful
Report abuse

Lady Evelyn
5.0 out of 5 stars Brilliant and important
Reviewed in the United States on July 9, 2019
As an original she-punk herself, Vivien Goldman is the perfect person to write this authoritative, engaging book on punk and gender. The punk professor focuses on songs. Her scope is global and multigenerational, spanning the Slits' pioneering sounds to current artists such as Girl in a Coma. Read it with the playlists playing.
Read more
3 people found this helpful
Helpful
Report abuse
See all reviews

joo
5.0 out of 5 stars Great for us aging ' she punks ' !!!
Reviewed in the United Kingdom on January 27, 2020
Verified Purchase
Great book for an aging 'she punk' !!!!....great book loved the playlists it included.
Read more
2 people found this helpful
Report abuse
See all reviews