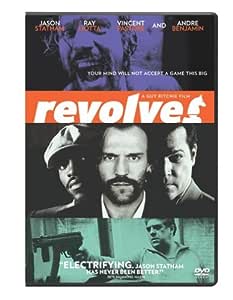 REVOLVER is populated with Guy Ritchie's (Snatch; Lock, Stock & Two Smoking Barrels) classic breed of fast-talking, sharp-suited gangsters but with a psychological twist that your mind may not be able to handle. Jason Statham(The Transporter and Transporter 2) is Jake Green, a grifter who vows revenge against Macha (Ray Liotta, Goodfellas), the ferocious crime boss who sent him to prison. After taking Macha down in a game of chance, Macha puts out a hit on Jake. Now, caught between a gun and a hard place, Jake finds himself protected by two vicious loan sharks (Vincent Pastore and Andre Benjamin) who make him an offer he can't refuse.

This curious fourth film from Guy Ritchie returns the writer-director to familiar gangster territory following his disastrous remake of Swept Away, which starred Ritchies wife, Madonna. Jason Statham, a Ritchie regular, stars as an ex-convict named Jake Green, whose strategy for bankrupting a casino owner/crime boss named Macha (Ray Liotta)--whom Jake holds responsible for his incarceration--results in Macha ordering him killed. Enter a pair of other criminals (Vincent Pastore, Andre Benjamin) with a plan of their own, preventing the hit on Jake but telling him he has a fast-acting disease that will soon take its toll. From there, an increasingly convoluted gangster tale becomes a fascinating if often silly movie about Jakes descent into possible madness while he simultaneously ponders the art of defeating ones enemies and communing with God. Ritchie is indeed in a serious vein, but he doesnt hold back on his unique sense of stylish fun, outfitting each character with memorable dialogue and behavioral traits. Standing out in a crowded pack of colorful underworld types is Liottas villain, who sympathetically conveys an all-too-human level of despair while wearing eyeliner and bikini underwear. The film becomes wearing after a while: Ritchie might be less interested in the crime genre than he once was. But there are plenty of fresh ideas here, even if they dont always fit perfectly together the way Ritchies catchy debut, Lock, Stock and Two Smoking Barrels, did. --Tom Keogh

We had the pleasure of talking with Jason Statham (The Transporter, Snatch, The Italian Job) about Revolver, his new film with director Guy Ritchie. Heres a taste of what he had to say, and you can hear more in the February edition of the Amazon Wire Podcast.

Describe Revolver for people who have yet to see the film:
I would say its a movie thats not to be confused with the likes of Lock Stock or Snatch if you have ever seen any of the previous Guy Ritchie movies, its not to be confused with that kind of a film. Its a little bit more of a serious sort of psychological thriller about being able to smash what controls you, but at the same time its all set within a world of ya know, violence, ya know that sexy shiny world that Guy Ritchie creates.
Do you see comparisons between Lock Stock, Snatch and this film as a good thing or a bad thing?
Well look, hes made two terrific films, two great black comedies, do you want him to go and make another one as well? Sometimes you have to do something a little bit different you cant please everyone.
Youve carried a lot of other movies, action movies, where theres explosions and fast cars, but this film is really held together by your presence, and its a totally different mood. Did you you feel a lot of pressure on your performance as Jake to carry the picture?
Um, I mean, no, its best not to try and focus on that really. But obviously if you havent got your usual bells and whistles to rely upon, then you have to try and dig it out from somewhere else.
What did you draw from your own experiences in preparing for this movie?
You might know from reading other stuff that I used to work on street corners hustling, or conning people if you like, so I understood the psychology of that and what you need to do to make somebody sort of bend over and succumb to your will, its a very simple set of rules theres so many ways that you can be sort of lured down a certain road and its all about making decisions, and if youre aware of what is leading you, you can make the right decision at the right time.
--Rachel, Amazon Movies & TV