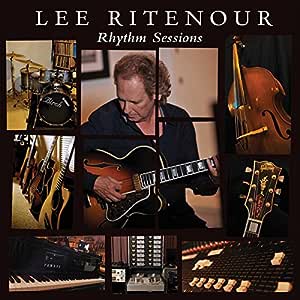 Lee Ritenour Format: Audio CD
4.4 out of 5 stars 171 ratings
See all 6 formats and editions Hide other formats and editions
Includes FREE MP3 version of this album.&nbspProvided by Amazon Digital Services LLC. Terms and Conditions. Does not apply to gift orders.&nbspComplete your purchase to save the MP3 version to your music library.
Available at a lower price from other sellers that may not offer free Prime shipping.

In a career that spans five decades and more than 40 albums, guitarist Lee Ritenour has developed a keen understanding of the symbiotic balance between the frontman and the supporting players, between the wisdom of experience and the enthusiasm of youth. On Rhythm Sessions, he surrounds himself with a cadre of high-profile veterans and promising newcomers all of whom reaffirm the vital role played by the rhythm section in any worthwhile musical endeavor.

Included on the Rhythm Sessions roster are luminaries like Chick Corea, George Duke, Stanley Clarke, Dave Grusin, Marcus Miller and many others. Also appearing throughout the record are the winners of Ritenour s 2012 Rhythm Section Competition, an international event he launched in 2009 as a guitar competition and later expanded to include aspiring keyboardists, bassists and percussionists. The competition winners appearing on the album include keyboardist Hans de Wild (Holland), pianist Demetrius Nabors (Michigan), bassist Michael Feinberg (New York) and drummer Selim Munir (Turkey). The album also features Ritenour s 19-year-old son Wesley, an aspiring drummer in his own right on one of the tracks.

The most recent result of that ongoing experiment is an album that embraces a variety of sounds and grooves, all rooted in jazz, but also layered with shades of funk, R&B, Latin, world music and more. The album s sense of variety stems from the eclectic source material. Some songs were penned by Ritenour, while others come from heavyweights like Herbie Hancock, Dave Grusin, Chick Corea, EST and Nick Drake. I wanted the various rhythm sections assembled for this album the guitar, keyboards, bass and drums to be very organic, says Ritenour. "The songs I wrote for this project were written with these different musicians in mind, and the songs I picked by other songwriters brought to mind certain players as well. So while my name may be on this record, it s as much about these other players as it is about me."

Ritenour's previous recording, 6 String Theory, had focused primarily on guitar by featuring the international winners of his 2009 guitar competition. However, in keeping with his ongoing commitment to discovering and mentoring new talent, he quickly realized that there was so much ground yet to be covered. "There are just so many great piano players and bass players and drummers out there, so when it came time to make Rhythm Sessions, I thought, Why not make a record featuring some of those great players, and then extend the contest to include the rhythm section, and let the young rhythm section winners make an appearance on the record?"

This mix of seasoned players with newcomers results in a multi-layered, multi-textural and extremely engaging recording. "I'm at a point in my career where I'm marshalling all of my skills and experience over 40 years and really putting it all into an album like Rhythm Sessions, he says. I've always loved working with great talent, and at the same time finding new young talent and opening doors for them. I want to take as many opportunities as I can to give something back as a way of expressing my thanks for all that s been given to me."