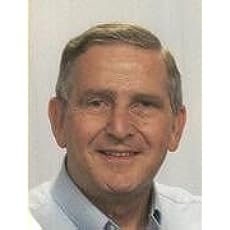 Richard Davidson is the author of the self-help guidebook: DECISION TIME! Better Decisions for a Better Life. He has written The Lord's Prayer Mystery Series: Lead Us Not into Temptation (I); Give Us this Day Our Daily Bread (II); Forgive Us Our Trespasses (III); Thy Will Be Done (IV); Deliver Us from Evil (V). He is also the author of the Imp Mystery Series: Implications; Impulses; and Impostor (more of same to come). He is the editor of: Overcoming: An Anthology by the Writers of OCWW. He is Past President of Off-Campus Writers' Workshop, the oldest ongoing writers' group in the U.S. and also the founder of the ReadWorthy Books Book Review Blog. Mr. Davidson is a Certified Lay Servant Speaker in the United Methodist Church and an Aeronautical and Astronautical Engineer. See davidsonbookshelf.com for more information.
Read more 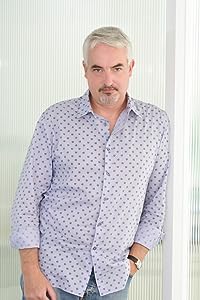 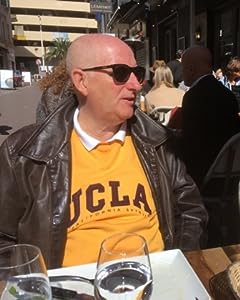 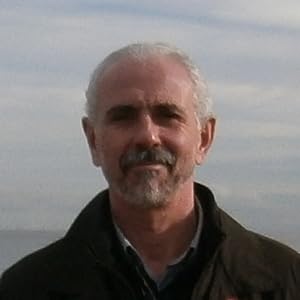 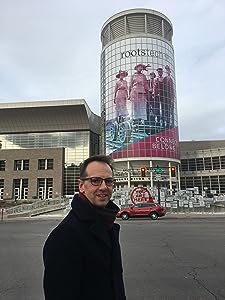 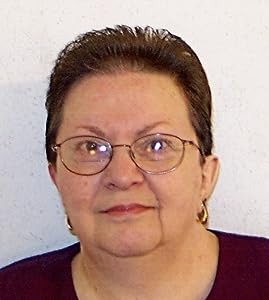 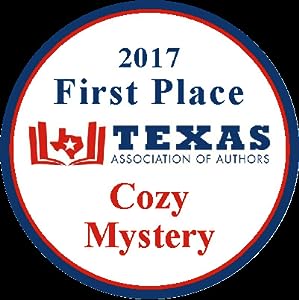 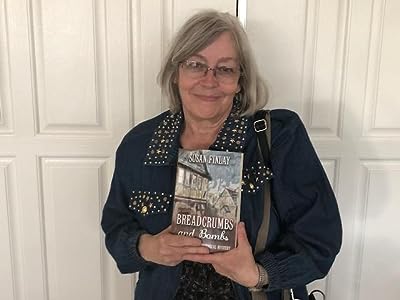 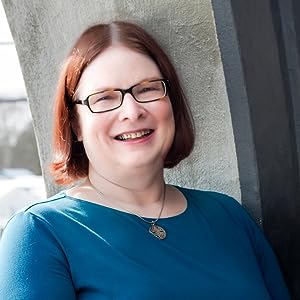 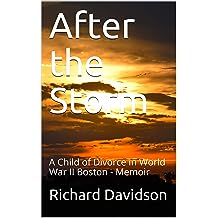 After the Storm: A Child of Divorce in World War II Boston - Memoir Nov 17, 2020
by Richard Davidson
$3.99
How can a child who wouldn’t have been born if his parents had a successful marriage work his way through the growing pains of childhood? What if he doesn’t even know his parents are divorced? Can divorced parents, separated by long distances, equally love their child? Add to these questions the backgrounds of the Great Depression, World War II, and 1940s Boston to get a vivid memoir of childhood in the most difficult portion of the Twentieth Century.
Read more
Other Formats: Paperback 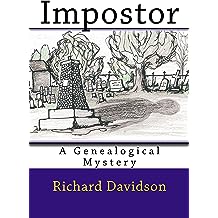 Impostor: A Genealogical Mystery (Imp Mysteries Book 3) May 20, 2016
by Richard Davidson
( 14 )
$4.99
When Debbie Danforth discovers a flaw in the genealogy of her live-in boyfriend, Jeremy Hadley, he and his family try to discredit her findings, but eventually admit they must be true. Jeremy and Debbie run a private detective business, the Sandley Agency and commit their skills and resources to learning about the impostor Debbie has discovered in the Hadley ancestry. They are assisted in this effort by Penny and Joe Gonzalez, principals in a covert federal agency, with whom Jeremy has previously worked as a consultant. Their joint investigation uncovers both unique details concerning the mysterious Hadley impostor and little-known facts about events leading up to World War II in both Britain and the United States. Was the person who masqueraded as a Hadley a villain or a hero? Did other Hadleys know he was a fraudulent member of their family? Did his actions assist or impede the British and the Americans as they faced the growing menace in Europe?
Read more
Other Formats: Paperback 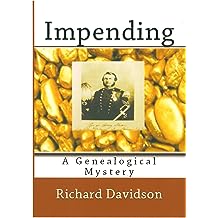 Impending: A Genealogical Mystery (Imp Mysteries Book 4) Jun 14, 2017
by Richard Davidson
( 6 )
$4.99
Young married private detectives, Debbie and Jeremy Hadley, discover that Debbie's family, the Danforths, have a family secret. Grandma Marie Danforth summons them because she fears that alienated family members and underworld characters will attempt to wrest control of the secret from her. The history of the secret begins at the American Civil War Battle of Gettysburg and develops through a century and a half of Danforth family twists and intrigues. Although written as a continuous story, Impending actually is two novels in one: the saga of how the secret developed from its inception to the present day, and the mystery of how to counter multiple attempts to hijack it. Impending is history and mystery all-in-one. Debbie and Jeremy team with police from two cities to unravel the mystery and reach its surprising conclusion.
Read more
Other Formats: Paperback 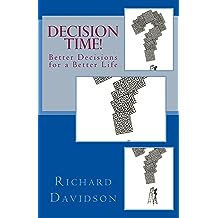 Decision Time!: Better Decisions for a Better Life Aug 31, 2015
by Richard Davidson
$3.99
Where you are in life today is the result of all of the past decisions you have made or which have been made for you in response to the various situations and events that have impacted your life. The decisions that you will make from this point forward will determine the degree to which your future will be positive or negative. DECISION TIME! gives you insight into the subjective decision-making process as applied to both small and large choices you will face. It includes dynamic aspects, cultural effects, and morality as applied to decision-making for individuals, teams, corporations, and societies. DECISION TIME! prepares you to face the continuous impacts of decision situations confidently and without hesitation.
Read more
Other Formats: Paperback 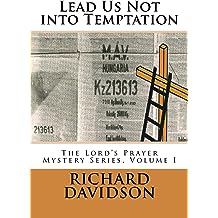 Lead Us Not into Temptation (Lord's Prayer Mystery Series Book 1) May 30, 2016
by Richard Davidson
$4.99
Arthur Blake, former NASA engineer turned minister, receives an emergency appointment to be pastor of the United Methodist Church in Parkville, a distant suburb of Chicago, following the bizarre sudden death of the church’s unusual former pastor. Pastor Blake’s attempts to unravel the mystery that shrouds his predecessor become involved with tracking the child of a possibly bigamous soldier in World War II England, art and jewelry treasures plundered by the Nazis, and the results of childhood sibling conflicts in combined families. Arthur’s allies in his investigation include Parkville Police Chief Bobby Andrews, County Medical Examiner Irma Custis, and the married team of Penny and Joe Gonzalez who work for a clandestine government agency.
Read more
Other Formats: Paperback 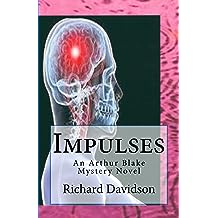 Impulses: An Arthur Blake Mystery Novel (Imp Mysteries Book 2) Jul 25, 2015
by Richard Davidson
( 5 )
$4.99
Several disturbing dreams cause Arthur Blake to wonder whether he is trying to do too much for the many people who seek his services. These qualms are complicated by Bishop Howard Chandler’s suggestion that Arthur temporarily set aside his official duties and take an extended sabbatical leave. His resulting internal debates about career moves are set aside when the pastor who replaced him at the Parkville church dies in an apparent suicide possibly linked to several deaths at the Parkville Rehabilitation Home. The bishop assigns Arthur to determine the circumstances behind the new pastor’s death, while Arthur and Irma, his wife and constant investigative partner, also study a mysterious shipment at his father’s antiques shop. The sudden disappearance of a young associate provides another mystery and leads to questions of life after death and reincarnation. Events that initially appear simple become increasingly complex as the true natures of many people come into question.
Read more
Other Formats: Paperback 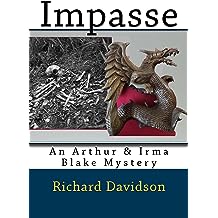 Impasse: An Arthur & Irma Blake Mystery (Imp Mysteries Book 5) Mar 13, 2018
by Richard Davidson
( 1 )
$4.99
The discovery of human bones while excavating a property to build a new church requires all work to stop. Arthur and Irma Blake investigate and find an earlier structure on that lot was involved in illegal activities, requiring FBI leadership of the inquiry. Further research reveals a group of foreign citizens who replaced Americans illegally and an elaborate money laundering scheme. What are the foreigners trying to do? Who killed the people unearthed during construction and others discovered later? How will the killer be brought to justice more than twenty years after the crimes?
Read more 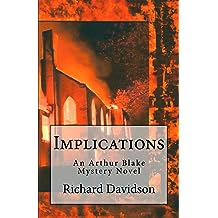 Implications: An Arthur Blake Mystery Novel (Imp Mysteries Book 1) Jul 18, 2014
by Richard Davidson
( 8 )
$4.99
Bishop Howard Chandler has assigned Pastor Arthur Blake to investigate the burning of a church in the small city of Amboy, Illinois. He learns from that church’s pastor that she had to overcome past improprieties by former members. During the investigation of the fire’s cause, Arthur and the state fire investigators uncover disturbing aspects of the ninety-year-old church’s design and history. Arthur calls on his federal associates for assistance, as the investigation of a local church fire expands to seeking solutions to related crimes occurring from the present, to recent years, and back to the Prohibition Era. Progress in the investigation intertwines with new developments in Arthur’s family life.
Read more
Other Formats: Paperback 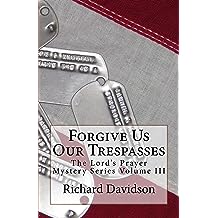 Forgive Us Our Trespasses: The Lord's Prayer Mystery Series Volume III Jul 18, 2016
by Richard Davidson
$4.99
Arthur Blake, Pastor of Parkville United Methodist Church tries to assist his father to resolve trauma caused by the discovery that his best friend, recently killed in a car accident, may have been an impostor with a heinous background. The investigation reveals that the assumed accident was but one link in a chain of murders. Blake works with his colleagues at ABC Consultants and a covert government agency to determine the presumed impostor’s identity and activities and to solve the murders. The coordinated effort to solve the puzzle involves incidents that span the period between World War II and the present, some of which have national and international implications that may affect the future.
Read more
Other Formats: Kindle , Paperback 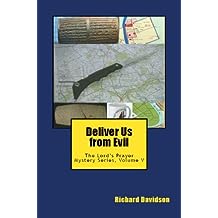 Deliver Us from Evil: The Lord's Prayer Mystery Series, Volume V Aug 2, 2013
by Richard Davidson
( 2 )
$4.99
Arthur and Irma’s wedding day has finally arrived, but an unexpected interruption leads to their need to investigate a possible murder committed by someone close to them. With the aid of friends and federal agents Penny and Joe Gonzalez, they follow a series of clues, crisscrossing the United States to learn more about the murder, related subsequent events, and the significance of a rare object brought home by a veteran of the Iraq War. A second murder close to Pastor Arthur Blake’s church involves them in a new investigation, assisting Parkville Police Chief Bobby Andrews. Are these murders and the tracking of that strange object connected? Will marriage deteriorate or improve the relationship between Arthur and Irma? Character flaws in many relationships color the outcome.
Read more
Other Formats: Paperback 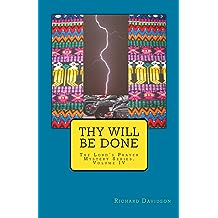 Thy Will Be Done (Lord's Prayer Mystery Series Book 4) Sep 29, 2012
by Richard Davidson
( 3 )
$4.99
The sudden death of a young woman attending Parkville United Methodist Church infuriates her brother and leads to congregational outrage over his outburst and subsequent murder. The investigation of that slaying by Pastor Arthur Blake and his associates leads to revelations of a previously undetected international criminal organization operating in the area. Unraveling the mystery and scope of this group entangle Arthur, his consulting investigator friends, plus local police and federal agents in a web of conspiracies extending from Illinois to both U.S. coasts and through Mexico to Guatemala. Severe family and interpersonal relationship problems are faced and resolved by members of the investigative team as they pursue the background and consequences of one quiet woman’s efforts to change things happening around her.
Read more
Other Formats: Paperback 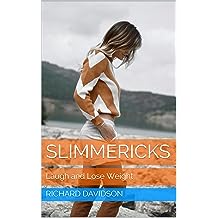 Slimmericks: Laugh and Lose Weight Mar 16, 2019
by Richard Davidson
$3.99
A humorous collection of limericks concerning the always-in-the-back-of-the-mind subject of weight control. The limericks are paired with matching photographs by a variety of talented photographers. If you ever think about weight control or fitness, you'll find something worth considering in Slimmericks.
Read more
Other Formats: Paperback