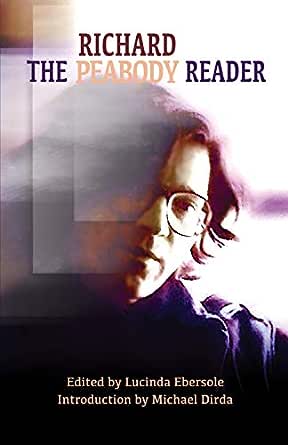 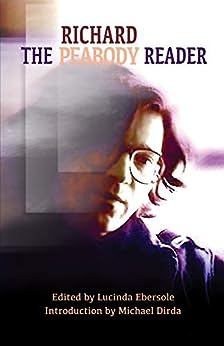 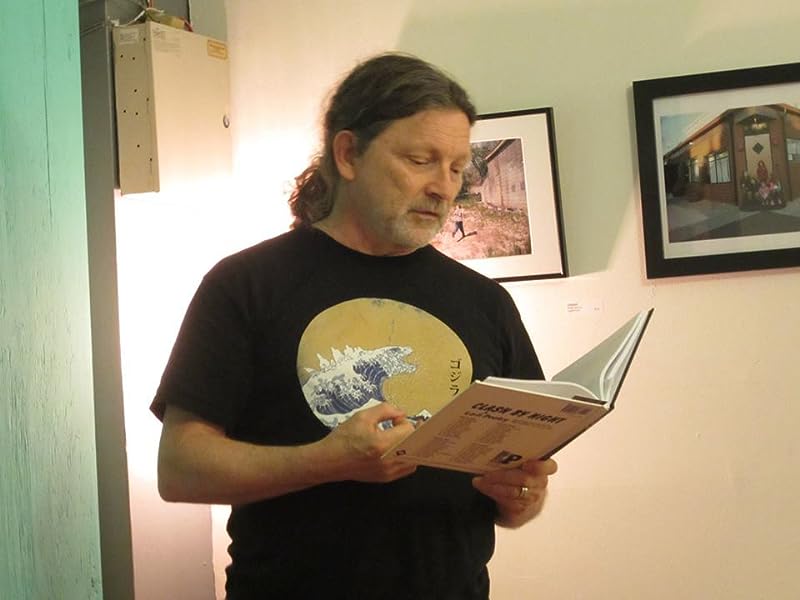 "Peabody shows it all here, tragedy, humor, joy,wit, and compassion, and speaks for a generation of adults who are still trying to figure it out in our age of decadence." —Scott Whitaker, the Broadkill Review

"The life work of this proud, bitter, principled, generous man and the immeasurable service he has done on behalf of literature command respect and deserve attention." —Michael Lindgren, the Washington Post

"This is a top-notch production . . . terrific and eclectic." —Nathan Leslie, the Pedestal magazine

Richard Peabody is the founder and current editor of Gargoyle Magazine, now on its 61st issue, and editor (or co-editor) of twenty-two anthologies including Mondo Barbie, Conversations with Gore Vidal, and A Different Beat: Writings by Women of the Beat Generation. The author of a novella, three short story collections, and seven books of poetry. A native Washingtonian, he has taught fiction writing workshops at various locations in the DC area since 1985, though primarily for the Johns Hopkins Advanced Studies Program since 1995 where he was awarded The Johns Hopkins University Excellence in Teaching Award, 2010-2011, and the Faculty Award for Outstanding Professional Achievement (Master of Arts in Writing Program), 2005. He has held residencies at Blue Mountain Center, Byrdcliffe, and the Virginia Center for the Creative Arts. He also won the Beyond the Margins “Above & Beyond Award” for 2013.  Lucinda Ebersole is a critic, an editor, and a fiction writer best known for her association with the literary journal Gargoyle Magazine, for which she has been coeditor along with Richard Peabody since 1997. She has also edited various anthologies with Peabody, most notably the various books in their Mondo series. Michael Dirda is a Pulitzer Prize–winning columnist for the Washington Post Book World and the author of the memoir An Open Book and four collections of essays: Book by Book, Bound to Please, Classics for Pleasure, and Readings. They all live in Washington, DC.

Elle Kaye
5.0 out of 5 stars I loved this book and will miss it now that I've finished it...
Reviewed in the United States on June 25, 2018
Verified Purchase
It's been years since I've read something as worthwhile as this collection of stories, poems, and essays by Richard Peabody. Each poem and story generates its own gravitational field of meaning, providing a welcome OtherWorld of characters, plots (some of them quite unusual) and an honest depiction of human vulnerabilities. In Peabody's stories magical reality abounds in the mundane; ordinary people have extraordinary longings. This volume has been my companion for the past three weeks. After such a generous, finely crafted serving of exquisite poetry and fiction, I will miss very much opening up this book each day and diving into its riveting, tender, funny, and authentic humanness.
Read more
Helpful
Comment Report abuse

Susan Tepper
5.0 out of 5 stars Been Reading This Book Every Night
Reviewed in the United States on March 12, 2015
Verified Purchase
For starters, this is a beautiful book to look at and hold. It has the ragged-edge pages which you hardly get these days in books and gives this book a timeless quality. The photos alone would make a great book, they are filled with the writer's history in terms of being a writer and publisher. And lover of the written word. Some people are enamored of the written word. Richard Peabody for one-- his range of work here is extensive and expansive. He writes straight without using elevated language. He gets in, tells his story or poem, and knows when it's time to get out. That, for a writer, is gold. I've been reading this book every night. Its cover and coloration makes me want to read it when there is darkness outside. This is just my own personal quirky thing. I attach to books and people in specific ways. I'm attached to this book and happy Richard Peabody decided to write it. Most highly recommended.
Read more
2 people found this helpful
Helpful
Comment Report abuse

Yarokit
5.0 out of 5 stars Five Stars
Reviewed in the United States on March 7, 2015
Verified Purchase
A treasure to savor, already dipped into many delights in this lovely volume.
Read more
One person found this helpful
Helpful
Comment Report abuse

S. Scott Whitaker
5.0 out of 5 stars From the Broadkill Review
Reviewed in the United States on December 13, 2015
The Richard Peabody Reader was a great cabin fever read this winter; the anthology gracefully covers Peabody’s range, depth, and humor. The Reader, compiled by Lucinda Ebersole is a mix tape of greatest hits from the Washington writer’s long career. Peabody is also a publisher of writers, the founder of Gargoyle literary magazine and Paycock Press, and organizer of regional readings and events. Along the way Peabody befriended Jamie Brown, the Broadkill’s editor, which is to say, dear reader, how I came to Facebook with Peabody, and this winter read and review his work. Full disclosure: I don’t know the man personally, but have a social media friendship with him, a smendship if you will. I reviewed his short fiction for the BKR some years ago, so the work within the collection was more or less all new for me. It’s a weekend of deep cuts, the collection is, a great reveal of humanity’s follies. The poetry collected here is the easy-peasy-lemo- squeezy free verse style that novelist and fiction writers do so well. That’s not a diss, either. Think Raymond Carver. Simple, direct, no fuss to it all; graceful and direct, but something verse-heads and formalists might dismiss as prosey. Consider “Good Hope Road” from the Read & Writing section, “his sharp features//like kudzu swallows Carolina red clay, “ or the opening line to “Folding Laundry in My Dreams” where Peabody speaks for almost every spouse or partner in any relationship when he says “I could fold laundry every day/for one thousand years/and never satisfy the women in my life.”

Peabody’s short fiction is a delight. Nothing’s too long for the commute (save for maybe “Sugar Mountain, a triptych”--which if you are fan of Neil Young is a delight to read), and Peabody nails suburban boredom, the kind that spirals into affairs, overblown pride, addiction and human stupidity. Peabody embraces violence, in the uber creepy “Peppermint Schnapps” a sleazy car salesman gets his just desserts, when a vengeful father and widow murders him out of long buried resentments surrounding his daughter’s pregnancy and suicide.

Family lies at the heart of Peabody’s work, those tangled, sticky, often unwanted relationships we nurture, starve, and nurture again, often leaving the reader on the emotional hook. That’s the beauty about short fiction, the reader gets one ending, but not the whole story. In “Walking on Gilded Splinters” it is only via the threats of a once homeless woman that drive the anti-hero back to his wife and family, and we feel that the marriage will fail, we almost want it too, because Wilson can’t control his libido or his ego, but we don’t get the luxury of finding out. Likewise in “Dresden for Cats” Uncle March is such an interesting personality, building cities for cats on his farm, allowing his cats to compose music, that we aren’t expecting his wife to turn up nuts, to turn the narrative upside down and end with a destroyed farm and stunned narrator, “You can pour all your love into somebody who’s mentally ill but they are big black holes, and you’ll never have enough love.”

The collection is gathered into sections; the thematic organizations allows for readers to experience Peabody of varying ages in each grouping; in a manner of speaking the reader can experience Peabody’s growth and breadth as a short fiction writer and poet in nearly every section. And what strikes me is his consistency as a writer, from his chosen subject matter to the clean line. I also love the pop culture references, which many writers cannot do well. Peabody’s up there with Stephen King, and Nick Hornby; who write about how movies, television, and music, especially music, affect our lives, and affect our reading of the story. Peabody knows when he conjures up, say The Grateful Dead, or Neil Young, or Nick Cave, that fans of the music will bring with them trunk loads of associations that enlarge the emotional narrative. Music and pop culture are as important as the time and place of the setting; cue-cards for the characters who often struggle to maneuver through the both the emotional and temporal setting of the story.

Peabody shows it all here, tragedy, humor, joy, wit, and irony, and speaks for a generation of adults who are still trying to figure it out in our age of decadence.
Read more
One person found this helpful
Helpful
Comment Report abuse

Moral Pomp
5.0 out of 5 stars Peabody Reader is a grand, grueling, and rewarding read
Reviewed in the United States on August 10, 2018
The Peabody Reader is wild. It's a genuine compendium of the best work by Peabody with all the hits and then some. I especially liked the long-form stories like flea wars and lost in IKEA. It's crazy this man isn't a mainstream success but he's beloved in the subterranean. Peabody is D.C. Lit. If you live in or around D.C. And live literature, then this is the gospel according to Lucinda Ebersole, the selected writings of a messianic figure. His poems are hit or miss I've found, some really get to you, some punctuate with a joke, some, like "im in love with the Morton salt girl" pretend to joke but burn with energy and meaning between the lines.

Bottom line: if you like good literature but don't know Peabody, you'll dig the reader--it's a great place to start. If you like Peabody, this is essential.
Read more
Helpful
Comment Report abuse

Caroline Bock
5.0 out of 5 stars A DISCOVERY! Moving poetry and short story collection
Reviewed in the United States on November 6, 2015
I discovered Richard Peabody and his writing through his literary magazine GARGOYLE. The poetry and stories are moving, about fathers and husbands and lovers who care deeply about their families and the world, and are worth sharing.
Read more
Helpful
Comment Report abuse