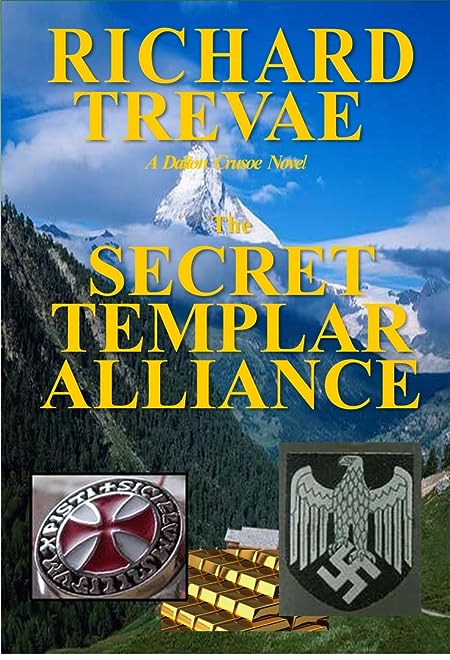 Part adventurer, part businessman, part author, Richard Trevae is a chemical engineer with an MBA in Finance and Management. Trevae matured a startup design/construction/development firm into a publicly traded company that later merged with a larger parent corporation. His articles concerning business valuation, mergers, acquisitions, and management practices have been published in various trade associations and business newspapers.

Writing "reality inspired fiction" became his latest passion, commencing with NEW REVISED Editions of, "THE ISRAELI BETRAYAL," and then followed by the prequel, "THE TARASOV SOLUTION".

Mr Trevae lives with his wife along the picturesque shores of Lake Michigan where he completed his third novel, "The SECRET TEMPLAR ALLIANCE", now out in hardcover, Paperback and eBook. A fourth Dalton Crusoe novel "THE RISING SEDITION" was released in early December 2014. Trevae has completed a fifth Dalton Crusoe novel,"The CAUSANYA PROPOSAL", released on October 25, 2016.

His extensive world traveling has provided a rich backdrop for the exotic locales featured in his novels. Trevae is working on a sixth Dalton Crusoe novel, expected to be published in late November 2019...titled "The DECEPTION STRATEGY". 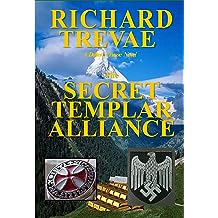 The SECRET TEMPLAR ALLIANCE (The DALTON CRUSOE SERIES of POLITICAL THRILLERS) Oct 7, 2020
by Richard Trevae
$3.95
This is the third Dalton Crusoe novel. I have updated the novel for certain clarifications, editing, and formatting along with some new artwork.
Read more
Other Formats: Paperback 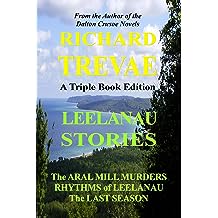 LEELANAU STORIES (Leelanau Soul Renewal Book 2) Feb 28, 2013
by Richard Trevae
( 4 )
$2.99
Documented historical events dating from 1854 to 1901 provide a confluence of events involving a ship wreck, a double murder, and a pardon for the killer―all staged in the lost town of Aral at Otter Creek, within the Sleeping Bear Dunes national lakeshore.

Charles T. Wright, an enigmatic man, with gifts and demons, arrives at the hub of three historical events which dramatically alter his life! Aral Michigan is enjoying a strong growth period in the 1880’s under the seductive personality of Charles T. Wright, hired to operate the local lumber mill. Charley has the ideal life. Still he harbors demons. Were it not for his beautiful baritone singing voice, business skill, and persuasive personality when sober, Charles Wright might seem disturbed.

After a man’s life seems to be falling apart he seeks a “soul renewal” in Leelanau, meets a strange wise man—and saves his own life.

Many seasons of deer hunting finally reveal the real meaning to the hunt—a life changing insight as he stands face-to-face with a twelve point trophy.
Read more
Other Formats: Paperback 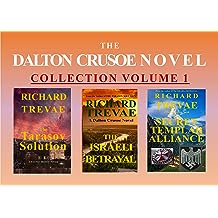 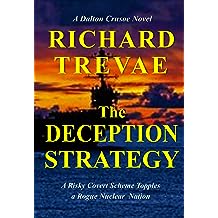 The DECEPTION STRATEGY: A Risky Covert Scheme Topples a Rogue Nuclear Nation (The DALTON CRUSOE SERIES of POLITICAL THRILLERS) Nov 23, 2019
by Richard Trevae
( 3 )
$3.95
America finds itself at another crossroad. A national election, now just two months old, re-orders the direction for the country. Incoming President Sam Kirklyn won with a thin electoral victory—bringing a far-left progressive agenda forward. The message was not lost on America’s foes, including General Secretary Kim-Jae Lee, leader of North Korea. A failed missile launch from the NOKO Wonsan site is seen as the latest attempt to perfect its missile program. The launch was in fact a first-strike attack on the US. The attack plan targets the US as NOKO demands a re-unification with the South or face a massive invasion. Lee reasons the new Kirklyn administration would be unable to respond for weeks, or longer, only to be embroiled in a new Korean war. The stakes are high. Even a weakened US military could do massive damage. A quick capitulation by the South would deter the US from halting the takeover. Lee believes President Kirklyn will shun a war posture, even when attacked. Lee feels China would be silent once the South surrenders. With China as a “passive supporter” a US challenge would endanger its economic ties with China.The initial nuke-tipped rocket explodes a minute after launch—falling into the Sea of Japan. The nuke nosecone falls in the water and is snagged in a fishing trawler’s nets. The trawler seeks help at sea from a salvage ship, owned by Graylle Cassidy. He recognizes the package and alerts his friend, Declan, Dalton Crusoe’s half-brother. Dalton sees a unique opportunity: covertly modify the warhead controls and return it to the NOKO navy searching for debris. Later, remotely detonate it at the Wonsan missile site, appearing as a self-imposed nuclear tragedy by Lee. Dalton convinces the President to employ the deception operation.
Read more
Other Formats: Paperback 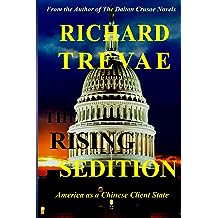 Five months remaining in his first term, President Harold Barriman is facing a storm of opposition. The liberal agenda he narrowly won with is enraging conservatives, libertarians, and independents. Thirty-four states have rallied support for a Convention of States as provided by Article V of the Constitution to reverse the liberal agenda. Under Barriman, and his powerful Chief of Staff, Badge Demarche, the nation’s debt has risen to $26 trillion, the economy is near collapse. Months before his next election, Barriman signs a $12.6 trillion financial aid package with China to fund a massive government stimulus program. Many controversial provisions, added to the aid package, have Americans divided against each other. In order to get the Chinese financial aid, Congress approved unprecedented intrusion by a foreign power into our nation’s sovereignty: a non-aggression treaty limiting the US military action except through United Nations approval; gun ownership is limited in style and type; ammunition production is taken over by the government and dispensed only through a lottery system; a five years price freeze is put in place; confiscatory taxation is put on businesses and high income taxpayers; and the president’s Economic Council is headed by a Chinese diplomat.
Most disturbing are the guarantee terms of the bail-out: title to development and mineral rights on 240 million acres of federal lands for fifty years. Most of the lands are in Alaska, western, and the Great Lakes states bordering Canada. A new “ recovery currency”, guaranteed by the Chinese government, similar to a twenty-dollar bill is introduced which is pegged at 2.5 times the US ten-dollar bill, and has small Chinese images and words displayed throughout.
Americans forge a ground swell of change coalition around a political action group, Pathroads for America, promoting Ed Kosko. Dalton agrees to assist his friend and mentor, retired NSA head to become the New Libertarian party candidate for President. A date was set, October 24th, in Dallas Texas, for the Convention of States to return the country to sovereign control refuting the agenda of President Barriman and his followers.
Dalton learns of a plot to assassinate the emerging leaders by of the New Libertarian Party through his newly discovered half-brother, Declan Faden Crusoe. Dalton struggles to unravel the threat, halt the president’s agenda, and protect his hunted half-brother; the answers force Dalton into lethal, conflicting choices as the deadline for the Convention nears and the national elections approach. Lines are drawn, the tension grows and lethal decisions are made.
Read more
Other Formats: Kindle , Paperback 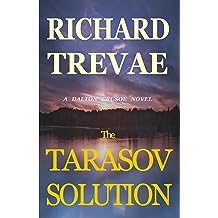 The TARASOV SOLUTION (The DALTON CRUSOE SERIES of POLITICAL THRILLERS) Dec 13, 2013
by Richard Trevae
( 16 )
$3.95
What if history lied to us? What if secrets revealed decades later could threaten world stability and leave us in chaos?

Decades ago, in the midst of the 1962 Cuban missile crisis, a paranoid Kremlin leader ordered the underwater deployment of two nuclear missiles near Cuba's shore; each warhead sealed in a protective cocoon. Buried in the sand, the twin nukes lay undiscovered for half-a-century.

Rumors of the missiles existence lure the attention of Yuri Tarasov, a pathological arms-merchant obsessed with possessing the doomsday weapons. Together with his ruthless assassin, Ivana Yenko, they board Yuri’s high-tech yacht Decadence and head for Cuba.

Naval Academy graduate, 25-year old Dalton Crusoe, finishes his MBA, is recognized for his quick analytical mind. When asked by friend and mentor Ed Kosko, head of the NSA, to interrogate a retired, Russian military-officer seeking asylum, Dalton learns of a sinister plot to assassinate President Connor and Russian President Blinikov during an upcoming, historic summit. Dalton assembles a secret special ops team directly under President Conner’s authority to locate and secure the missiles before Tarasov can retrieve them.

In a race against time, Dalton struggles to rescue his kidnapped girlfriend, search for the nukes throughout the Caribbean, outwit the evil Tarasov, and prevent the destruction of Washington D.C. along with the Russian and U.S. presidents!
Read more
Other Formats: Paperback 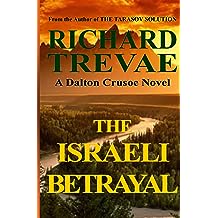 The ISRAELI BETRAYAL (The DALTON CRUSOE SERIES of POLITICAL THRILLERS) Feb 22, 2013
by Richard Trevae
( 7 )
$3.95
A unique ore discovered in mining operations at Elko Montana near the Canadian border holds extraordinary promise in weaponry and energy. Oil economies scramble to slow or halt the energy discovery if they cannot own it. Energy poor countries step forward, modifying their international posture to gain licensing to the green source of power.

Determined operatives from the clandestine hidden government, “KCG”, supported by Israel and Japan stole the raw ore and rushed through research to assemble a new custom fusion bomb. Weeks later the KCG, through Israeli co-conspirators perfects a breakthrough in the stolen technology and destroys an Iranian weapons facility. Days later, U.S. firm Enertek, is feverishly working to understand if the ore catalyzes slow fusion when a sudden explosion destroys labs just as critical reaction data is downloaded to servers. The Iranians are furious suspecting western involvement in their destroyed weapons plant, yet the world sees the blast as a careless mistake.

They hire contract–assassin Hasid Khamal to uncover and kill the attackers. The KCG launches its own operatives to recover the Enertek explosion data files and foil U.S. efforts to develop the unique technology. Energy Secretary Kosko asks Jameson Dalton Crusoe to take control of the Elko discovery. With the assassin Khamal and the KCG out to stop Dalton he becomes the guardian of an emerging technology that emboldens a powerful shadow government consortium to destroy avowed enemies and alter the balance of power in the world. The KCG has enormous access to technology, funds, international connections, military forces and all under an impenetrable screen of privacy. The initial bomb success in Jefrah Iran emboldens KCG member Dr. Eli Weiss, to create additional custom bombs and eliminate Israel’s and Japan’s vowed enemies...and also destroy the U.S. ore supply.

Dalton becomes the President’s point man to secure the technology, stop the KCG and lead a covert special military unit into Israel. His bold plan, co-ops the Israeli command center and then moves to North Korea on the complex mission. Dalton compromises the KCG, saves the Elko mine from devastation and secretly orchestrates a second planned bomb attack on a new North Korean weapons complex.

Taking a much needed rest in the Caribbean with Carolyn, his love interest, Dalton is nearly killed in a surprise attack by Khamal. Returning home from the secret mission amid high praise from the President, he asks Dalton to manage world deployment of the fusion technology. He struggles with the decision.
Read more
Other Formats: Paperback