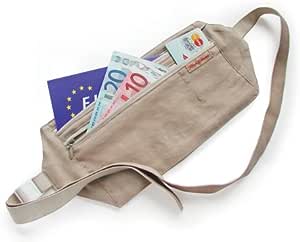 Brand: Rick Steves
4.2 out of 5 stars 426 ratings
Currently unavailable.
We don't know when or if this item will be back in stock.

Made from comfortable spun silk, our sturdy, ultra-light, under-the-pants money belt and neck wallet is your best guarantee against pickpocket theft. Its soft elastic strap/neck cord adjusts to your unique shape and the slim, strong buckle makes it easy to clip on and off. The main zippered compartment features a moisture barrier liner and the second zipper reveals two easy access compartments: one for your cash and one for your credit/debit cards. KIVA's exclusive Rick Steves line of travel luggage and accessories is designed to be practical, durable and light weight - ideal for the frequent traveler, whether for Europe or cross-country. Each items' "Rick tested" features work to make every trip smoother and more enjoyable.

4.2 out of 5 stars
4.2 out of 5
426 global ratings
How are ratings calculated?
To calculate the overall star rating and percentage breakdown by star, we don’t use a simple average. Instead, our system considers things like how recent a review is and if the reviewer bought the item on Amazon. It also analyzes reviews to verify trustworthiness.

R Brown
3.0 out of 5 stars Disappears... in a good way
Reviewed in the United States on February 8, 2012
Verified Purchase
Short and Sweet
I am sure that most of the other money belts that I looked at would have performed just as well. The Rick Steves money belt is slim, comfortable, and virtually disappears while wearing it. I would buy it again.

Expanded
I don't think that it is anything revolutionary but it does the job and does it well. When my wife and I went traveling abroad she wore this little thing with our back up documents and some cash. I kept the passports with a Pacsafe Coversafe 100. I felt more secure with the Pacsafe because it has a cable stitched into the waistband rather than just a cloth band. The only benefit that I could tell is that the Rick Steves money belt virtually disappears while you are wearing it. The Pacsafe showed just a bit when bending over because of the pant fabric pulling tight over the cable creating an outline, less so with the Rick Steves.

Rating
Three stars. While I do not feel that is anything all that amazing, it does its job well and there were no issues with the workmanship.

Bottom Line
If you are looking for an easy to wear, near invisible money belt you can't go wrong with this product.

ken in the city
5.0 out of 5 stars Functional money belt that never let me down
Reviewed in the United States on September 8, 2008
Verified Purchase
Recently used this in Europe for 10 days and it was very useful. First off, the weather was hot, mid 80s during the day and the belt didn't really add to my body heat (which was good). Though once it reached in the low 90s and I did sweat a little into it. However, for the most part, I didn't really notice the the belt at all once I had it on. It was pretty comfortable and most importantly, the snap on buckle never gave way or came loose. I've heard some other belts have that issue.

The design is functional enough. Its very light and the silk material makes it soft. The nude color helps conceal it even through thin linen shirts. There are two zippered compartments. The back one fits passport, bills, tickets, etc. It also has a soft plastic divider which I suppose can be used to partially shield your valuables from light rain (but it is not waterproof for swimming). The front compartment can likewise fit bills but not much wider than that. It is subdivided into two smaller pockets, which is helpful- I used one to hold tokens for transit and another general coins. Also, I could tighten it enough to not move around on my waist, but not so tight that it caused me any discomfort.

I agree one setback is that the strap is so long that i needed to twine it around itself it to not stick out of the bottom of my shirt. But that can easily be remedied by just cutting the excess strap off with a scissors.
Read more
42 people found this helpful
Helpful
Comment Report abuse

Mountain Mike
3.0 out of 5 stars Passport won't fit
Reviewed in the United States on January 5, 2020
Verified Purchase
It was light weight. The belt part is long enough to fit anyone. I tried using a safety pin to secure the extra length. Afraid the plastic clasp might not hold. Not a good idea. The pin showed up in TSA X-ray. I just tied it after that. The pouch part seemed small. I wanted to put my US passport in it, but it would not fit. Use it for long term security. As with any money belt, it's hard to access money and such easily. Keep some spending money in your pocket to be readily accessable. Only fault I have is the passport size. I can't believe that Rick Steves would approve of such an item if he actually used it.
Read more
Helpful
Comment Report abuse

Alena L.
5.0 out of 5 stars Worked well on a 3 week trip
Reviewed in the United States on September 23, 2013
Verified Purchase
I read loads of reviews about money belts before my husband and I went on a 3-week trip to Europe - his first ever and my first in 25 years. When I was 30, I never worried about things like money belts and travel insurance. But times change. I finally bought a Rick Steve's Silk Money Belt for each of us. And although a money belt is not the most comfortable thing to wear, it worked pretty well and you get used to it. I wore it every day. Being a heavy lady, instead of wearing it around my waist where it would have been very visible, I wore it in the front tucked under my bra strap. The bra actually kept it more secure. The belt strap is very long, as several reviews mention, and I ended up tucking it into the belt and zipping the zipper tight against it. One review said that the plastic snap broke and the belt fell off, so between the undergarment security and the strap being tucked in and zipped up, I felt I was safe against that calamity. The belt held the majority of our currency, extra credit cards, driver's license, debit card, and my passport. The credit card pockets are a bit tight but they held everything I needed them to hold. The belt material feels nice against one's skin, the plastic snap held up fine, the belt washed and dried overnight very well, and overall, I am very pleased with the product and will use it again on the next trip. Although I don't think we were ever in danger of being robbed, I felt safer having my valuables and my passport hidden close to my heart. The only time it was inconvenient was at the Frankfurt airport on the way home where they made us take it off while going through security, and don't ask me why as there's no metal on it. I had to put it in my carry-on until I could get to the bathroom to put on again.
Read more
4 people found this helpful
Helpful
Comment Report abuse
See all reviews