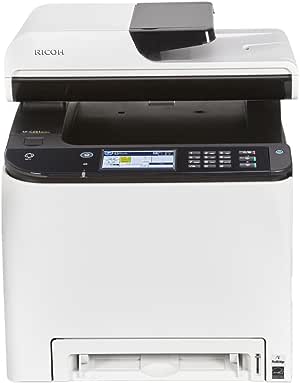 The best laser multifunction printer (MFP) for your startup or small workgroup should enhance collaboration, raise productivity and offer a low total cost of ownership (TCO). Introducing the RICOH SP C261SFNw Color Laser MFP  a powerful, yet compact MFP designed for personal users or workgroups of up to three people. You'll save time by printing up to 21 pages per minute (ppm), and capture and share information efficiently with copy, scan and fax capabilities.

3.6 out of 5 stars
3.6 out of 5
92 customer ratings
How does Amazon calculate star ratings?
Amazon calculates a product’s star ratings based on a machine learned model instead of a raw data average. The model takes into account factors including the age of a rating, whether the ratings are from verified purchasers, and factors that establish reviewer trustworthiness.

Tee Cee
5.0 out of 5 stars This is the best one I've owned yet
Reviewed in the United States on February 13, 2018
Update 12/31: About a month shy of the 1yr anniversary of using this machine, I just had to replace the black toner. The configuration report says I got 695 pages of B&W and 431 pages of color for a total of 1,126 pages, none of which have jammed. The starter cartridges are rated for 1,000 pages, and I would assume that most of the color pages included black - in fact most of them were probably 98% black with a blue hyperlink in them or something. The color cartridges are at about 3/4 full still, despite being a few pages away from 50% of the rated capacity - translation, the starter cartridges are as advertised or slightly better.

This reminds me of another thing I like about this printer: there is no time penalty for b&w vs color, because each cartridge contains its own imaging drum (I think I'm using the right terminology, if not, sue me). I've had color lasers in the past with one imaging cartridge, so color pages took 4x longer than B&W because each color (CMYK) had to get its own turn with the page. Bonus, if you buy genuine Ricoh toner (it was only like $10 more when I bought it), you can get a return label for recycling the old one.

I also came up with two negatives!
1) If you're using it wirelessly and something happens to your wireless connection, you have to restart the machine for it to reconnect to the network. This is silly and can probably be fixed in firmware if Ricoh finds out about it (maybe they already have?)...I have mine plugged in on ethernet now, which is ironic because an initial requirement of mine was that the printer must support wireless. This is an annoyance if not a problem.

2) While it's printing, it doesn't appear that you can do other things ... so if you plan on printing a 50 page document and then scanning something at the same time, you might be out of luck.

Let me dry my tears and move on .....
------------
I am very particular about my printer purchases. I've only bought laser, for my home use, for more than 10 years. This is the best one I've owned yet. The only thing I *don't* like about it is ... I can't think of anything. Maybe it's a tad slower than my outgoing unit? I mentioned home use, so I'm not in a terrible hurry, and the built-in auto duplexing more than makes up for it -- and yes, the ADF can scan duplex. It scans both sides at one time, in fact.

I just thought of an issue -- envelope printing is a bit weird. You have to lift a couple latches on the fuser - maybe it keeps envelopes from melting shut? I don't know, because I haven't printed an envelope in the 2010s. But it seems like it would be a hassle for a regular envelope printer.

Oh, despite the A4 in the description, it can perfectly well handle North American Letter-sized paper.

Google Cloud Print was not supported out of the box but a firmware update solves that.

Been using this unit for one month .. today, in fact .. and will update this as time progresses.

Amazon Customer
1.0 out of 5 stars RICOH does not support this
Reviewed in the United States on November 29, 2018
Verified Purchase
Don't waist your time unless you want no support. Ricoh won't even let you register this product unless you are a business. If you don't register it, they can't/won't help you either. Their loophole! I've had issues with it saying it is offline. Had to reinstall it multiple times. It will scan to my computer but then when I try to print it says it is offline. Probably an easy fix but I've googled the issue with no luck and of course RICOH can't help me because I'm not registered. Also the print quality is not the greatest. I really wanted to love this printer but I just have too many issues. I'm going to try and return it. I've had it less than a month and have been trying to register for 3 weeks. Was just told tonight they would not because I am not a business.
Read more
19 people found this helpful
Helpful
Comment Report abuse

Amazon Customer CRC
3.0 out of 5 stars Great color printing, great price, difficult to figure out how to do things given the huge manual.
Reviewed in the United States on June 24, 2018
Verified Purchase
So far it prints great color on normal paper. Double sided printing is also painless. My prior printer (for years) was a Brother that I wish I could just repair. The Ricoh is painfully slow--print 10 pages of double-sided color, go get a cup of coffee, maybe two. (I'm exaggerating just a little). The Ricoh manual is huge also, so I still don't know how to scan double-sided to USB, for example, after spending 15 minutes trying to find it. Way too much deep technical information and how to do complex functions, and not enough simple information on "Here's how to do X" in that manual. The Ricoh is also very finicky on paper thickness. I used to print signs on thicker magnetic sheets on the Brother and it just did it every time. The Ricoh just won't do that no matter what I try. The Ricoh paper tray also seems finicky, because I have to open it and push all the paper back in every once in a while after it jams itself up. For the price though it's good, especially for 'normal' printing, but you'll need to study for your 'Masters Degree in Ricoh' in order to do anything other than simple prints.
Read more
21 people found this helpful
Helpful
Comment Report abuse

FamilyShopping
4.0 out of 5 stars Love this laser printer
Reviewed in the United States on February 26, 2018
Verified Purchase
Love this laser printer. Quick and quality prints. It does not auto print when switching from WIFI to USB printing as I had to install driver packages for both types of connections. I am pretty tech savvy and my main complaint was the WIFI Scan to folder and email setup took me hours to complete and a phone call to customer support, which was very helpful I might add. Scanning is auto duplexing, and printing is auto duplexing.
Read more
17 people found this helpful
Helpful
Comment Report abuse

B***1
1.0 out of 5 stars Circuit Breaker in the house Trips when Printer turned on
Reviewed in the United States on March 28, 2019
Verified Purchase
Circuit Breaker in the house Trips when Printer turned on. Called RICOH help desk number and explained the situation,
but it was a waste of time. The rep said there is something wrong with the house wiring even before he heard what was happening. Tried to explain to him that I had brother laserjet MFC9130, HP Laserjet and Cannon laserjet printers and none of them caused the power trip before. I tried connecting the printer directly to the wall outlet without any other equipment hooked up in the entire room, then used a power strip and also a separate UPS, but none of that helped. I brought MFC9130 printer, hooked up to the wall outlet and powered on and it works fine. The RICOH printer says it uses 11 AMPs and the power capacity in the GFC outlet is 20 AMPS. But the trip occurs not in GFC, but the entire house. Not sure, whether I got a lemon. Not taking a chance again with RICOH products.
Read more
7 people found this helpful
Helpful
Comment Report abuse
See all reviews from the United States

Page 1 of 1 Start overPage 1 of 1
This shopping feature will continue to load items when the Enter key is pressed. In order to navigate out of this carousel please use your heading shortcut key to navigate to the next or previous heading.
Back
Next
Pages with related products. See and discover other items: wi-fi printers, Best color laser printers for computers, ricoh printer, color copies paper, Wide Printers, B Signs