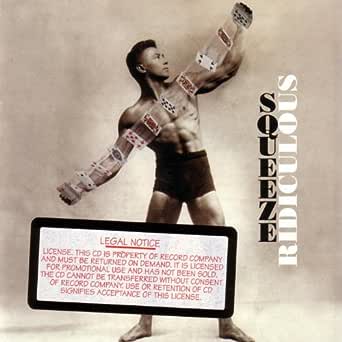 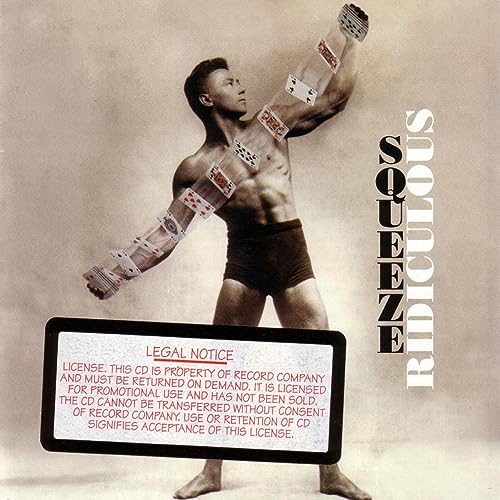 souther0257
5.0 out of 5 stars Took a long time
Reviewed in the United States on January 28, 2013
I have a whole bunch of Squeeze albums. CD's, I mean. In high school I heard
them for the very first time, the song "Black Coffee In Bed". I still live in the
same area, and I have also heard "Tempted" (singer, Paul Carrack on lead, and
on some station I heard "Last Time Forever", with the Jack Nicholson overdub.

I'm not British, so I excuse a lot of people here in the US for their lack of love
for Squeeze. "Ridiculous" took a long time to grow on me. Although the album
is not overproduced, it is one of those albums that needs not remastering, even
now. My favorites, when I first bought this album, were "Walk Away" and
two others. Now, this whole album rocks. I know it isn't exactly rock, and that
is a matter of taste. All of Squeeze's album have electric guitar included, so
there is a rock taste. Such as "Pulling Mussels from A Shell" on Argybargy.
There are a lot of rock songs by Squeeze, their brand.

"Ridiculous" has a lot of songs that make me keep coming back. Because
of the lyrics, the melodies. They have their followers, and this album is
one for starters.

curbach@sbcglobal.net
2.0 out of 5 stars A Major Disappointment
Reviewed in the United States on April 24, 2001
My rating is really 2 1/2 stars. There are some good songs here, but not really enough for 3, especially considering this album clocks in at 55+ minutes.
Coming on the heels of the excellent Some Fantastic Place, Ridiculous is a major disappointment. Lots of bland mid-tempo numbers that sound like Difford & Tilbrook are sleepwalking. I waited a few weeks and many listens to write a review because I was hoping some subtle gems would reveal themselves (as on the vastly underrated Play album), but most of these songs continue to unimpress me.
Surprisingly, the biggest offenders are the songs which prominently feature Chris Difford's vocals. Usually, Difford sung ditties appear as rare and entertaining treats in the Squeeze catalog. There are a whopping 4 of them on Ridiculous and all are substandard. In addition, Keith Wilkinson, who came up aces on Some Fantastic Place with "True Colors", can only muster the dull "Got To Me" this time around.
"Electric Trains" is the catchiest song here, but it is somewhat sabotaged by trite and pandering lyrics. "This Summer", "Daphne", and "Great Escape" are all very good, and perhaps "Sound Asleep" qualifies. So Ridiculous is still a worthwhile pickup for fans, but certainly not one of Difford & Tilbrook's better efforts.
Read more
7 people found this helpful
Helpful
Comment Report abuse

IJEFF
4.0 out of 5 stars SURPRISINGLY GOOD RECENT EFFORT
Reviewed in the United States on March 4, 2001
Picked this up recently on a hunch. Pleasantly surprised at the quality of the songs and performances. "This Summer" is as fine a single as they've ever released. Would have been a huge hit if they could have come up with that one in 1985. "Electric Trains" is an excellent opener. Not a bad song in the bunch. Also, some interesting variations on their trademark sound that come off very well. For later day Squeeze, this is the one I would recommend. Even better than "Play" and "Some Fantastic Place", though those two are also recommended.
Read more
4 people found this helpful
Helpful
Comment Report abuse

Peter Yustat
5.0 out of 5 stars An intellegent pop album.
Reviewed in the United States on July 30, 1998
Difford and Tillbrook deliver a wonderfully diverse collection despite being misunderstood by record companies and mainstream audiences. As always, the duo hits home by exploring everyday situations and providing interesting insights. Those looking for 'snappy' pop tunes as on their local pub's copy of 'Singles - 45 and Under' may be disappointed. Although this record has some strong pop singles - from the quintessential Difford\Tillbrook - 'This Summer' to the Beatlesque 'I Want You', 'Ridiculous' has been created for those who long for clever writing, unique melodies and a clear attention to detail. Difford and Tillbrook assert themselves as masters of musical imagery ....once again.
Read more
2 people found this helpful
Helpful
Comment Report abuse

Carl Mack
2.0 out of 5 stars NO FANTASTIC PLACE
Reviewed in the United States on September 6, 2001
I too had hoped these tunes would grow on me being a life-long Squeeze fan but they just seem bland an uninteresting. This like any Squeeze effort has a few moments. The nostalgic "Electric Trains" is very touching and reminds me of the Squeeze of the "Argybargy" period. "Daphne" also is a great song, somewhat reminiscent musically of XTC's "Dear God". Then there is "This Summer" which is a great slice of pop heaven. Other than that, filler and three good songs do not a classic make.
Read more
3 people found this helpful
Helpful
Comment Report abuse

Kathy
3.0 out of 5 stars Heaven Knows
Reviewed in the United States on November 22, 2001
I originally heard the song "Heaven Knows" in the movie "Hackers". At the time I didn't even know the title of the song or the artist. After some research I found it to be Squeeze. I really haven't listened to the other songs because I like this one so much. This particular song reminds me of how I feel about the man in my life and I couldn't wait to share it with him. I suppose it's one of those songs that most men refer to as "girly music", I guess that's why I like it so much.
Read more
One person found this helpful
Helpful
Comment Report abuse
See all reviews