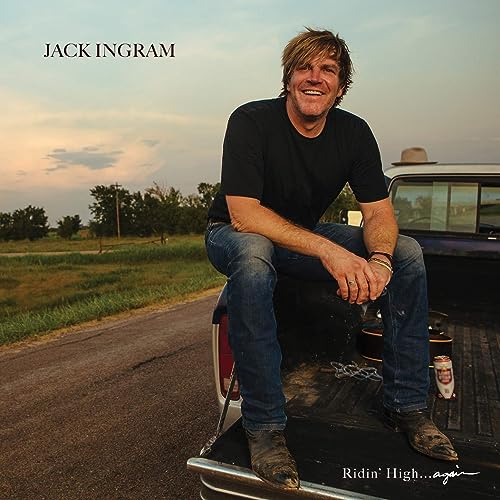 4.6 out of 5 stars
4.6 out of 5
38 global ratings
How are ratings calculated?
To calculate the overall star rating and percentage breakdown by star, we don’t use a simple average. Instead, our system considers things like how recent a review is and if the reviewer bought the item on Amazon. It also analyzes reviews to verify trustworthiness.
Top reviews

Jeff J
5.0 out of 5 stars BUY THIS ALBUM NOW!!!
Reviewed in the United States on June 13, 2019
Verified Purchase
Okay...So this probably won't be the most objective review ever. I've been following Jack, since his college bar days, going on 25 years ago. Jack has followed a long and winding road, with both ups and downs. For awhile, he had a big label deal and played the Nashville record company game, which earned him a #1 song and an ACM award for Top New Male Vocalist (15 years into his career...Go figure!!!). After that Nashville stint, Jack was pretty quiet on the recording end for several years. A couple of years ago, he thankfully came back by delivering the stellar Midnight Motel, that shook off all of the Nashville polish with a live, loose in the studio feel.
With Riding High...Again, Jack brings that same in-studio feel back that brings to mind Jerry Jeff's Viva Terlingua. Riding High...Again could probably be best described as a tribute to both his heroes and his peers, with covers fro the likes of Guy Clark, Rusty Wier, Willie Nelson, Kris Kristofferson & Hayes Carll. The album kicks off with an Ingram original Alright, Alright, Alright that is a fun, rave up shout-out to his friend Matthew McConaughey. Other Ingram originals include the bluesy Staying Out of Jail, Where There's A Willie and Tin Man, his cowrite with Miranda Lambert & Jon Randall. Sailor & The Sea, his tribute to his mentor Guy Clark is worth the price of admission alone. Sailor & The Sea is set to an absolutely ethereal musical backdrop, that I often wish would keep going and going.
All in all, Riding High...Again is a fantastic and fun addition to Jack's catalog and another worthy stepping stone in his musical journey, that he clearly is in control of.
My one and only very minor quibble with the album is the microscopic font used in the liner notes. Being old school...yes...I still love to read the credits and liner notes. These are printed so small that even my progressive lenses laughed at me. Finally resorted to snapping a pic with my phone and blowing the picture up.

Q
5.0 out of 5 stars Welcome Back Jack!
Reviewed in the United States on November 26, 2019
Verified Purchase
Jack is considered to be one of the original guys playing "red Dirt" music. He got away from that for awhile. Well, Welcome back Jack. His last two albums have been great. In other words...more like the younger Jack Ingram. He had a stretch there where I felt he was trying to be a Pop Country star. Hopefully those days are in the past. This album is really damn good!
Read more
Helpful
Report abuse

Steven C Hassenplug
4.0 out of 5 stars An Album to Fit the Artist
Reviewed in the United States on May 27, 2019
Verified Purchase
I first saw Jack Ingram sing live 25 years ago. I was immediately impressed with his natural charisma and stage presence. Additionally, the man obviously can flat out sing. And though there are many Country singers with great voices, Jack knows HOW to sing. His rhythm and enunciation really give the songs punch. This album is so much fun because the band apparently recorded together live in the studio and that brings a party feel to the performance. Buy this album and take it for a road trip!
Read more
Helpful
Report abuse

Tony Mason
2.0 out of 5 stars Didn't really care for it
Reviewed in the United States on August 30, 2019
Verified Purchase
Didn't care for the songs and the songs just go on and on and on. CD would have been better if cut a few minutes from each song. Lost interest after a while.
Read more
Helpful
Report abuse

DeeAnn Murr
5.0 out of 5 stars Jack Ingram Riden' High ... again C-D
Reviewed in the United States on October 2, 2020
Verified Purchase
We really like this C-D I bought my son one also he likes it very much too.
Read more
Helpful
Report abuse

Rev Erin E Splaine
5.0 out of 5 stars Jack Just Keeps Getting Better
Reviewed in the United States on April 27, 2019
I've been listening to 'Ridin' High...Again' on Amazon Music all morning. Why this dude isn't a household name is beyond me. He is a keen observer and a poignant songwriter. His music has depth and layers that demand more than one listen. He also never fails to bring a sly sense of fun to his work. Good golly, go buy this and all of his albums - you will not regret it.
Read more
6 people found this helpful
Helpful
Report abuse

Pendejo Grande
5.0 out of 5 stars If you like Texas Country, buy this one.
Reviewed in the United States on February 17, 2020
I’m a late convert to the Texas Country scene having spent most of my adult lifetime clinging to my seventies rock icons and hoping a new generation of rockers would come on the scene at some point.

One day I decided to clean up my computer and ditch a bunch of trashy music my kids ad loaded onto it. Something convinced me listen to snippets of Pat Green, Randy Rogers, and Wade Bowen before hitting delete, and.......you know, this stuff ain’t too bad.

Fast forward a year or two and I’m in a record store in Austin for a meet and greet w Randy Rogers and while waiting, I peruse the Texas Country section. I see a new cd out by Jack Ingram and he’s covering two old Jerry Jeff tunes and it’s only $9.99 so I buy it. One of the Best Buy’s I’ve made lately. Ive listened to it almost daily for the last six months. Sailor & The Sea is a damned masterpiece is all it is. Thanks Jack.
Read more
Helpful
Report abuse
See all reviews