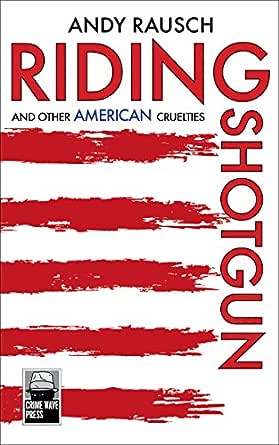 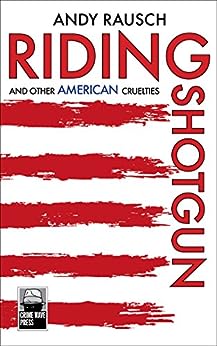 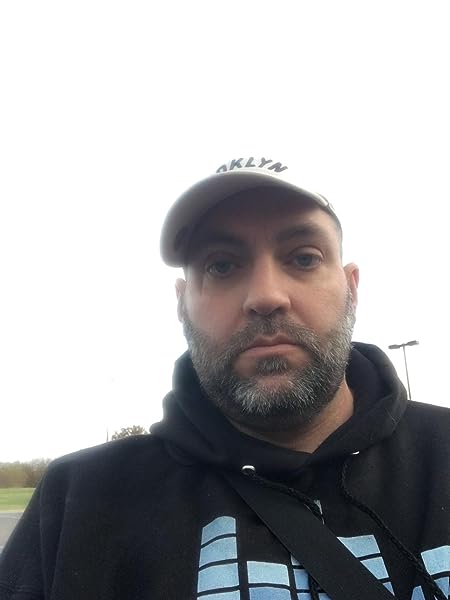 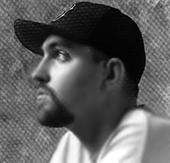 Andy Rausch is an American film journalist, author, screenwriter, film producer, and actor. He is the author of several novels and novellas including Elvis Presley, CIA Assassin. He also wrote the screenplay for Dahmer versus Gacy and is the author of some twenty non-fiction books on popular culture. --This text refers to an alternate kindle_edition edition.

Felicia Denise
5.0 out of 5 stars Remember to Breathe!
Reviewed in the United States on July 11, 2018
Verified Purchase
Riding Shotgun and Other American Cruelties is the trifecta of a good time if you’re like me and like your crime fiction wild, reckless and hard-boiled.

Fast-paced and slickly written, this trio of novellas hit hard and fast… and leave a high body count in their wake.

Emmett Dalton robbed banks, got shot twenty-three times, did his time in prison, and became a businessman capitalizing on his past.

But his past is calling to him. The young guys of the 1930s have no style or panache. He needs to show them how it’s done.

Forty years after their heyday, an unlikely trio of senior citizens go on a bank robbing spree. However, breaking the law at any age is never a good thing to do.

Sort of a one-item bucket list for over-the-hill gangsters, this read has moments to make crime fiction and history fans smile. Emmett Dalton, Baby Face Nelson, and John Dillinger… all in the same room; G-Man Melvin Purvis is a regular guy, and Hoover is still a jerk.

An author is chosen at random by baddies to commit a murder. His wife is killed and daughter taken to motivate him. Joe Gibson has to become a killer to save his daughter.

Riding Shotgun shows what a regular joe is capable of when pushed too far. Crooks don’t know what they’re up against when they turn a good guy bad.

This one played like a movie in my head with the late Charles Bronson as Joe Gibson. Good stuff.

Wannabe rappers try to take revenge on the arrogant record company mogul who fired them by kidnapping him to extort money from him.

There are two problems.

Two—he’s more hard-core than they are.

I can’t even call the crime a comedy of errors. It’s more likes scenes of stupidity. Loop and Bugs… OMG! They should have sold the house, banked their cash and gotten jobs at Best Buy.

Disgraced Chicago cop, Charlie Grimes, ends up in L. A…. and investigating the crime. He’s got a bad ticker and a smart mouth and his one-liners are priceless.

Riding Shotgun and Other American Cruelties is not for the faint-of-heart, squeamish, or HEA-fanatics. But any reader looking for great crime fiction with killer writing (see what I did there?) needs to download this today!

Joel Philips
5.0 out of 5 stars Terrifically dark collection of crime fiction
Reviewed in the United States on April 2, 2018
Verified Purchase
I just finished tjis terrific collection of crime short stories. The author, Andrew J. Rausch, is better known as a film journalist / historian and this collection of crime fiction is by turns charming, blackly humorous, bone-chillingly grim, and (especially, the last story “$crilla) gut-bustingly hilarious. Seriously, the last two stories (“Riding Shotgun” and “$crilla”) are new crime classics. Definitely not for the faint-hearted or easily offended, but if you have a strong stomach and an open mind, check it out!
Read more
One person found this helpful
Helpful
Comment Report abuse

Donnie Holbrook
5.0 out of 5 stars Like Mickey Spillane on PCP
Reviewed in the United States on July 25, 2012
Verified Purchase
'Riding Shotgun' is a fast-paced ride through pulp country. It's clearly influenced by Elmore Leonard and his ilk, but is much more reminiscent of the kinds of novels guys like Mickey Spillane and Donald Westlake used to write. At about 100 pages, 'Riding Shotgun' moves rather quickly--there isn't one misplaced line of dialogue or plot device here. Sleek and slick, this short novel has no time to waste on character development or nuance; the author gets into the story on page one and gets back out almost as quickly. You frequently hear the phrase "page-turner," and it's often misused, but 'Riding Shotgun' is a page-turner if ever there was one. This book is as dark and as funny as anything published in recent memory.
Read more
5 people found this helpful
Helpful
Comment Report abuse

Bailey
5.0 out of 5 stars Very Entertaining
Reviewed in the United States on November 3, 2012
Verified Purchase
Riding Shotgun is very well written. It does contain some violence, but Mr. Rausch is able to catch your attention from the very first page with his realistic descriptions and dialogue. This novella will appeal to those people seeking an escape from their normal humdrum lives. It is a very fast paced story and fun to read. I will be watching for this authors next book.
Read more
4 people found this helpful
Helpful
Comment Report abuse

Dutch
5.0 out of 5 stars fabulous read
Reviewed in the United States on February 14, 2014
Verified Purchase
I really liked this book. Cool story with interesting characters. What does a man do when his wife is murdered and his daughter is kidnapped?
Read more
2 people found this helpful
Helpful
Comment Report abuse

donchute
3.0 out of 5 stars Interesting Story & Written Well
Reviewed in the United States on September 18, 2013
Verified Purchase
The Story is very interesting, and the ending was completely unexpected to me. The writing is smooth and holds your interest.
Read more
One person found this helpful
Helpful
Comment Report abuse

Tammy Adkins
4.0 out of 5 stars Great short book
Reviewed in the United States on May 19, 2013
Verified Purchase
I liked it cuz it was short, sweet & to the point. I like those kind the best.
Good book
Read more
2 people found this helpful
Helpful
Comment Report abuse

Kindle Customer
4.0 out of 5 stars Justice somewhat
Reviewed in the United States on February 19, 2013
Verified Purchase
Wanted it to end differently. Joe should not have died. He got most of the bad guys. He should have lived to take care of his daughter.
Read more
One person found this helpful
Helpful
Comment Report abuse
See all reviews

PauDlBrazill
5.0 out of 5 stars A Whipcrack!
Reviewed in the United Kingdom on January 31, 2019
Verified Purchase
Andy Rausch's Riding Shotgun: And Other American Cruelties is a marvellous collection that consists of three violent and blackly comic novellas. Prohibition era gangsters meet wild west outlaws in the first story, 'Easy-Peezy', 'Riding Shotgun' is the tale of a crime fiction author who is forced to commit murder, and in '$crilla' - my personal favourite - a failed hip-hop group kidnap an obnoxious record mogul. Each story is packed with more great characters and sharp dialogue than many novels and all would make cracking films. Riding Shotgun: And Other American Cruelties is a hell of an enjoyable ride.
Read more
Report abuse

Extremely high user of Amazon
5.0 out of 5 stars He did it again!
Reviewed in the United Kingdom on July 12, 2013
Verified Purchase
Great read, loads of dark humour had me laughing out loud! Would make a great movie. Kind of reminds me of pulp fiction esque type of gangster flick. Just wish it had been a bit longer. Looking forward to more from this author :)
Read more
Report abuse
See all reviews