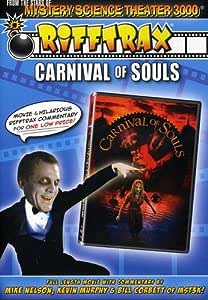 Save with Used - Very Good
$9.99
FREE Shipping on orders over $25.00 shipped by Amazon.
Arrives: Saturday, Jan 30
Ships from: Amazon
Sold by: BNA Deals

RiffTrax: Carnival of Souls - from the stars of Mystery Science Theater 3000!

Horror! Romance! Spine-tingling suspense! Carnival of Souls will make you long to be watching a movie that contains any of these things! In fact, you'd probably settle for a movie that contains a discernible plot. Instead you get lead actress Candace Hilligoss, notable for having one eyebrow that is consistently raised higher than the other. Along her journey to Utah (most of which is shown in real time) she meets colorful characters such as "The greasy guy in the boarding house" and "The priest who disapproves of her organ playing." - Carnival of Souls is grim, unsettling and contains 150% of your daily recommended dose of organ music. Therefore, it is like putty in the hands of master riffers Mike Nelson, Kevin Murphy and Bill Corbett of RiffTrax.com and Mystery Science Theater 3000. Watch as they shape this filmic atrocity into a hilarious lump of comedy, which, from the right angle, kind of resembles an ashtray. Happy Father's Day!

Jonnathan Ritland
5.0 out of 5 stars Carnival of laughter, plenty of laughter....
Reviewed in the United States on August 22, 2012
Verified Purchase
While in a car with two friends, some young men drag race with them, drive onto a bridge and the car with the girls gets sent over the side into the river below. A bit later while people are trying to find the submerged car, one of the young women named Mary comes out of the water and can't seem to remember what happened. So after barely any time grieving she decides to take her organ playing ability to Utah where she can make a new life, she shacks up in a house where a creepy, drunk guy across the hall keeps hitting on her, the priest that feels her type of organ playing is evil and Mary herself just looks blank as ever no matter what the scene calls for.

Oh and there's a mysterious, creepy and shut down carnival that Mary seems drawn to for some reason that she doesn't understand, oh by the way Mary also keeps seeing some scary guy in drab make-up that seems to want something from her, but what? This is honestly not a terrible movie, there's some atmosphere to it, sadly the acting is pretty bland but Candace Hilligoss as Mary is on a whole new level of bland and bad.

I did throughly enjoy the Rifftrax crew's take on this flick, they do get off some fantastic lines especially directed at Mary, the constant organ music, Kevin Murphy's password line during the department store sequence was one of the best to me. There is some dead space, which is expected given the lack of dialogue in parts of the film, the riffs do stay at a good pace for the most part. Its not the best riffing they've ever done but its in the top half of the DVD's they released in my opinion. I was laughing more often than I wasn't thats for sure.

Kevin J. Loria
VINE VOICE
4.0 out of 5 stars When Organists ATTACK!
Reviewed in the United States on August 18, 2013
Verified Purchase
"Just a warning, do not eye his lemon drink." ... A cautionary tale about consequences of Drag Racing and Organ Playing gone bad in Utah. Contains spooky stock footage, a rooming house with a relentless pervy guy, a twitchy spinster, a creepy submergible specter and plenty of modest origanist's dresses too. This surreal moody cult film breaks Kevin's spirit and he threatens the hold Bill & Mike hostage until DisembAudio negotiates with the film. As always the former stars of Mystery Science Theater 3000 do a bang up job Riffing this one, I'd recommend anything with their brand especially the downloadable Twilight Saga audio commentaries which may be their funniest work to date.
Read more
3 people found this helpful
Helpful
Report abuse

Douglas A. Sommer
4.0 out of 5 stars Nice combination.
Reviewed in the United States on September 2, 2015
Verified Purchase
This is an odd one for me. I had never seen CoS before, and while it was obviously low budget, it did a good job of creating a moody atmosphere. The riffs were good, but nothing that had me laughing hard. So I actually enjoyed this for both the movie and the jokes, though some rifftrax DVD releases are better than this. House on Haunted Hill, Voodoo Man
Read more
One person found this helpful
Helpful
Report abuse

swanzilla
3.0 out of 5 stars Three Stars
Reviewed in the United States on March 20, 2018
Verified Purchase
great riffs .. but the back ground music is very annoying { only got through half the movie }
Read more
Helpful
Report abuse

Penny
5.0 out of 5 stars Extremely FUNNY!
Reviewed in the United States on December 4, 2013
Verified Purchase
This is the funniest movie made by RiffTrax! It's been one of my favorite horror movies for years but now I will always watch their version. This DVD has the option of listening to their comments (I highly recommend this) or turning them off to view the movie as it was released. This is just too good to not share! I bought one for my cousin, too.
Read more
3 people found this helpful
Helpful
Report abuse

butterflygal3
5.0 out of 5 stars Bizarre
Reviewed in the United States on March 20, 2014
Verified Purchase
This is a bizarre movie that achieved cult fame. Stream-of-consciousness, like a Bergman film but not good ! Riffs are what make it fun.
Read more
2 people found this helpful
Helpful
Report abuse