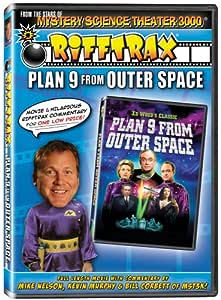 RiffTrax: Plan 9 From Outer Space - from the stars of Mystery Science Theater 3000!

If you set out to create the worst movie you could imagine, what would be your second step (we're presuming you've already hired Cuba Gooding, Jr. as the lead.) Maybe to cast a 300 pound Swedish wrestler as LA Police Chief? Make some flying saucers out of tinfoil and string? Perhaps see if a guy named Dudley Manlove could fill a supporting role? And you'd certainly want legendary director Ed Wood, Jr. involved, as writer, producer, director, or if possible, all three!

Well, Plan 9 From Outer Space has all of that and more! (Except for Cuba Gooding, Jr. Aside from not being born when it was made, he had already committed to "Daddy Day Camp.") Plan 9 is a movie that exceeds all expectations, a difficult task for a flick frequently dubbed "The worst movie of all time." Few films are more deserving of a hilarious mocking commentary, and fortunately, Mike Nelson, Kevin Murphy and Bill Corbett of RiffTrax.com and Mystery Science Theater 3000 rose to the occasion.

Terry
5.0 out of 5 stars 'Plan 9 From Outer Space' - believe it or not, this movie has gotten even more hilarious! You'll love it!
Reviewed in the United States on August 23, 2016
Verified Purchase
Okay, I'm a big Ed Wood fan. I think the man was a genius and one good guy. I am not blind to the fact that his "Plan 9 From Outer Space" is low-budget film-making riddled with discontinuity and rather embarrassing dialogue. Still, it has stood the test of time for it has 'heart'. It was a work of love for our boy, Edward. Since the movie was (unintentionally) funny to begin with, I thought the riffing might play as a battle between it and the already inane dialogue and story... and quality of the physical scenes, but I was happily incorrect (and glad of it). The riffing compliments the unintentional humor of the movie, as well as adds humor to the almost normal scenes of the film. It is no battle of words between the movie and the riffing. Instead it turned-out to be a marriage. A marriage made in an insane asylum perhaps, but a good and loving marriage nonetheless. And we know how rare that is these days. Full of hilarious comments and bantering, this is another Rifftrax masterpiece. And, yes... I watch this one over-and-over, too. As is the custom, our friends at Rifftrax have provided us with a menu which allows us to select the non-riffed version of 'Plan 9 From Outer Space' and the riffed version. Thank you, Rifftrax gang. And again... my brother received a copy of this from me. And, no... I did not give him my copy. No one gets my copies of Rifftrax dvds. No One! And, yes... he got the usual threat that he had better watch the dvd. Although I am older than he, he is taller and stronger, so my threats can only go so far. Sad, really. Well, if you want to have some laughs, alone or with any family that still claims you, this is one great Rifftrax movie to watch. Halloween is coming up soon, you know. Thank you, Rifftrax gang, for this swell and hilarious riff on a classic olde movie of dubious distinction. Ed Wood be happy and proud. ~terry
Read more
2 people found this helpful
Helpful
Report abuse

Shazam!
5.0 out of 5 stars The Most Ridiculous Film of All Time - Riffed!
Reviewed in the United States on October 24, 2017
Verified Purchase
Although frequently billed as "the worst film of all time", I would say that this movie is more like "the silliest film of all time" (there's worse, and I've seen them, actually). Rifftrax makes it hilarious. I was laughing like an idiot, nonstop. You can actually see the strings of the flying saucers! The ultimate reason for the aliens' actions is so ridiculous that I wondered if Ed Wood had even attended elementary school. (Basic science blows it apart. Ever hear of photons?) The hugely fat police chief/reanimated corpse is a baffling choice. Vampira as the late wife of Bela Lugosi was the worst possible casting, and the best for laughing at. And who knew that planes were flown using cardboard instruments? If you're unsure of the purchase, rent it on Amazon Video, first. I'm glad I bought it!
Read more
Helpful
Report abuse

K. Laurey
1.0 out of 5 stars Great bad movie. Disappointed in ‘Trax crew.
Reviewed in the United States on October 18, 2020
Verified Purchase
Love the movie itself, and the quality of the dvd itself is fine, so 5 stars for that and Amazon’s service.
I used to love the Rifftrax guys too, but they stepped over the line three times too often for me on other films—so will subtract 4 stars from this one. I tossed out all their stuff. Too bad; I’ll miss the good ones.
Read more
One person found this helpful
Helpful
Report abuse

Otto Correct
4.0 out of 5 stars The "Worst Movie Ever Made" gets the MST3k Treatment...
Reviewed in the United States on August 18, 2011
Verified Purchase
Ed Wood's masterpiece, "Plan 9 From Outer Space," has long been famous for being the "Worst Movie Ever Made." That accolade was given the film long before MST3k revealed such cinematic travesties as "Manos the hands of fate" or such bewildering directors as Coleman Francis.

Truthfully, "Plan 9" IS a bad movie, but a more accurate award would be "Most Unintentionally Entertaining Bad Movie" as all the continuity errors, low budget effects, bad dialogue, incredible plot holes, etc. come so fast and furious you'd swear someone made this film intending it to be a comedy. Sadly, no, the people involved really did intend a serious drama, they just failed every single step of the way.

As is, its a movie that's incredibly funny on its own. With RiffTrax its even funnier. Mike, Kevin and Bill do a great job, and even though I've seen the movie on its own about a dozen times, some of their jokes actually pointed out things I had missed during all those previous viewings.

Also, since you can play "Plan 9" with the commentary off, I was able to sell my previous DVD copy of the film, as the print on this DVD is very crisp, actually better than my standalone DVD.

So if you're a fan of MST3k, check it out. If you've never seen "Plan 9" before, please watch the movie WITHOUT the commentary first. You won't believe your eyes.
Read more
5 people found this helpful
Helpful
Report abuse

J. Shorter
5.0 out of 5 stars Funny Stuff!
Reviewed in the United States on January 1, 2013
Verified Purchase
I enjoy "Plan 9 From Outer Space". I watched it originally years ago along with "Plan 10 From Outer Space". I just remember being horrified ... that anyone could make such awful movies! My friend said I was crazy for renting them, but these things are SOOOOOOOOO bad, you can't help but not watch. So, having a good Rifftrax group to poke fun at the incessant plot-holes, bad acting, cheap crappy sets, and pretty much everything else in the film is pretty much the ONLY good way to watch something this rotten. Thankfully, half the crew of the SoL are here to do just that. Buy it. Watch it. Love it.
Read more
One person found this helpful
Helpful
Report abuse

Jen
5.0 out of 5 stars So very Bad but so very Good
Reviewed in the United States on March 16, 2015
Verified Purchase
Should I be worried that the movie plot- such as it was- made a sort of sense? Anyway, there are few pleasures in this world as fantastic as watching someone who really enjoys what they do. The only difference here is, while Ed Wood loved his work, he wasn't good. However, RiffTrax riffers are both clearly enjoying themselves but also are very good at what they love. I've watched it ten times already, both with and without riffs, and have had a wonderful time each viewing.
Read more
One person found this helpful
Helpful
Report abuse
See all reviews
Pages with related products. See and discover other items: mystery science theater 3000