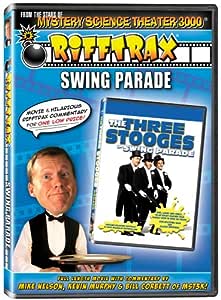 RiffTrax: Swing Parade - from the stars of Mystery Science Theater 3000!

During the Swing Parade craze of the 1940s, it was hard to turn your head without encountering a Swing Parade. With the popularity of Swing Parades soaring, a full length motion picture was inevitable. Unfortunately, the film we got was clearly rushed out to capitalize on the Swing Parade fad. How can we tell? There doesn't appear to be a single damn Swing Parade in the whole movie!

Instead, we get the Three Stooges, who wouldn't know a Swing Parade if it bit them on the...Perhaps we're overreacting here. After all, a movie with mannish landlords, songs about blind mules, and Larry must be pretty ripe for mockery. And if it's called Swing Parade but does not feature any actual Swing Parades, then all the better! Mike Nelson, Kevin Murphy and Bill Corbett of RiffTrax.com and Mystery Science Theater 3000 make no false claims: They provide no Swing Parades, only hilarious commentary.

RoochakTop Contributor: Anime
5.0 out of 5 stars A Corny but Amusing Time Capsule
Reviewed in the United States on June 8, 2015
Verified Purchase
Apparently no one alive now knows what a "swing parade" is, but who cares? Even without the riffing, this movie would be worth watching for one of Curly Howard's last performances before his career-ending stroke, for Louis Jordan singing his R&B hit, "Caldonia," and for rare footage of the great Connee Boswell singing "Stormy Weather." (Much fun is made of her elaborate dresses, which concealed her paralyzed legs from the audience.)

Gale Storm (which sounds like a stripper's name) would go on to become a 'fifties TV star, but here she's the more interesting half of a romantic couple faced with various money and legal troubles. The disc gives you the option of watching this corny but amusing 1946 time capsule with or without the riffing, but the jokes do kick it up another level. This low budget musical comedy was directed by future film noir heavy hitter Phil Karlson.
Read more
Helpful
Comment Report abuse

KreepyGrrl
5.0 out of 5 stars Hits the mark everywhere
Reviewed in the United States on September 6, 2013
Verified Purchase
I love the movie un-riffed, I loved it riffed, I even found the Three Stooges to be unusually restrained, even respectful (I know, right?) -- all in all, I love it! It's probably my favorite of the Rifftrax films I've seen. I do take exception to the contention that there was no Swing Parade, for I saw it quite clearly during the number of that same title, but I often take exception to one or two of their contentions, it hardly ever affects my enjoyment of the film, so we're par for the course on that one.

So if you're a fan of campy 40s musicals, and I know I am, watch this one. Then watch it without the Boys. See if you don't agree it's good both ways.
Read more
Helpful
Comment Report abuse

Bruce Barker
4.0 out of 5 stars As close as you can get to new MST3K
Reviewed in the United States on April 13, 2010
Verified Purchase
I've had more than my share of frustrations trying to enjoy Rifftrax. I love the idea in general. The MST3K crew finally gets the chance to riff on blockbuster films instead of "cheesy movies - the worst we can find" and it's what fans of the show have craved for 20 years. The way it works is, you download the Rifftrax file containing the running commentary, and then play it while watching the actual movie. You don't get to see your favorite bots with Mike or Joel at the bottom of the screen, but you DO get all the humor that the Best Brains team is famous for. They even bring in guests like "Weird Al" Yankovic to join in the fun. Sadly, only about half of the Rifftrax files work for me. If you don't have the exact edition of the original movie, it just won't work. As a result, I was able to enjoy their treatment of "Dirty Dancing," but try as I might, the rifftrax file of "Jurassic Park" will play, but the movie itself freezes at the title screen because my version of the film simply won't cooperate with the additional audio.

Well, here is a solution of sorts. Mike Nelson and crew have begun releasing some of the older movies and shorts as Rifftrax DVDs! I'm hoping some of the bigger studios come to realize that this is an excellent way to get some additional mileage out of their catalog titles and allow the Rifftrax team to include titles like the SPider Man films and The Jurassic Park movies in with future releases. I'd be willing to drop a bit more cash so Rifftrax can pay royalty and licensing fees to the giant studios in order to include them in the series.

But on to Swing Parade! The DVD gives you the option of watching the film with or without the Rifftrax treatment. The print of the film is a fairly clean black & white edition and the quality of the print is good enough that it's worth purchasing just to complete your 3 Stooges collection if you are a fan.

The idea of combining the Stooges and the MST3K team is a match made in heaven and Mike, Kevin, and company do not disappoint. There are many inside comments and asides that will draw knowing smiles and nods from long-time Stooge fans and some sexual innuendo that neither the Stooges nor the original MST3K treatments could have gotten away with. The movie itself contains far too little of the Stooges themselves to be considered one of their starring vehicles, but it sure is nice to see a full-length Curly film instead of sitting through Curly Joe Derita's pale presence in the other feature films featuring Moe Howard and Larry Fine.

This is definitely one of the better Rifftrax DVD releases and I would suggest picking this one up along with their masterfull dissection of "Plan 9 From Outer Space" as the starting point for collecting these DVD versions. The more of these the fans buy, the more Mike and Friends will be able to release and the more leverage they will have in attempting to get some of the more modern films released in this format! So once you have purchased the actual MST3K collections from Rhino and Shout! that are available here at Amazon and gotten hold of the "authorized" copies of the other episodes that aren't yet in release, treat yourself to some Rifftrax! You'll be very glad you did. I also recommend visiting their website if you want to try downloading some of the other "riffs" that are audio-only companions to some of your favorite films and visiting any of the approved "Mistie" sites that distribute copies of the show if you want to collect the unreleased MST3K episodes. MST3K org is the best I've found thus far and Mike at that site is very careful not to distribute ANY of the commercially available episodes, so there is no danger of piracy. There is also a list provided of the Rhino and Shout! titles that links right back here to good old Amazon so you can do all your Mystery Science Theater shopping legally and in one place.

The Rifftrax DVDs are VERY reasonably priced and just as much fun as a visit to the Satellite of Love!
Read more
7 people found this helpful
Helpful
Comment Report abuse

Otto Correct
4.0 out of 5 stars An odd choice, but I like it!
Reviewed in the United States on September 13, 2011
Verified Purchase
I've not seen every episode of MST3k, but I'm fairly sure they never did a 1940's swing musical-comedy before, so this is a first for the riffing game.

The movie is about a woman being kicked out of her apartment, who goes to sing at a club, or something... god, I don't actually know. The plot seems secondary as the movie is really there to show you some bizzare musical performances, the 3 stooges, and a kid who makes strange sound effects. As a long time 3 Stooges fan (not to mention a fan of just the Stooges, go Iggy!) it was kinda a letdown to see that the Stooges are not all over the place in this film, they're in more of a supporting role. That said, the goofy songs, outdated smarmy comedy, and the parts that DO have the stooges in it provide plenty of fuel for Mike and Co.

It makes for a rather strong entry in the RiffTrax catalogue. The song about the blind mule towards the beginning had me rolling, partly because they just... kept... going. So funny. See it for yourselves.
Read more
2 people found this helpful
Helpful
Comment Report abuse

swanzilla
2.0 out of 5 stars Two Stars
Reviewed in the United States on March 20, 2018
Verified Purchase
didn't care for this rifftrax at all
Read more
Helpful
Comment Report abuse