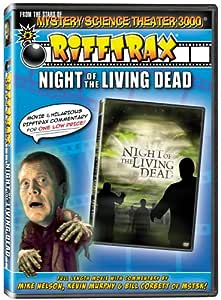 Rifftrax: Night of the Living Dead - from the stars of Mystery Science Theater 3000!

The classic zombie thriller that started it all - made new with a hilarious, rapid-fire commentary by Mike Nelson and the stars of Mystery Science Theater 3000. Yes, the dead are walking, and hunger for human flesh. A group of panicked survivors hole up in a deserted farmhouse while an army of zombies encircles them - can they last the night?! Terror turns to laughter as Mike Nelson, Kevin Murphy and Bill Corbett live through The Night of the Living Dead!

4.6 out of 5 stars
4.6 out of 5
46 global ratings
How are ratings calculated?
To calculate the overall star rating and percentage breakdown by star, we don’t use a simple average. Instead, our system considers things like how recent a review is and if the reviewer bought the item on Amazon. It also analyzes reviews to verify trustworthiness.
Top reviews

Terry
5.0 out of 5 stars A Great Olde Classic Made Even Greater.
Reviewed in the United States on August 23, 2016
Verified Purchase
Well, the Rifftrax gang (formerly of 'Mystery Science Theater 3000') takes on the original classic drive-in zombie film, "Night Of The Living Dead". They did a superb job of keeping me laughing... a lot. It must have been tough to come-up with hilarious comments to accompany a movie which at times has only one character mumbling to himself while nailing up boards, and at the same time another character is moping around the house rather catatonic, but the Rifftrax gang did it, and did it extremely well. I bought this dvd, and consider it a very good purchase. I think that any fan of "Night Of The Living Dead" would enjoy this Rifftrax dvd very much. I also think anyone who has not seen this 1968 zombie thriller will like this dvd very much. The menu allows for the riffs to be turned-off, and one can view the film in its original non-riffed format. It's like getting two movies in one! Whether watching it alone or with any friends you may still have, this edition from the Rifftrax library is sure to entertain. Great job by the Rifftrax gang! I later bought this dvd for my brother's birthday. And I told him he'd better watch it! (laughing) ~terry
Read more
One person found this helpful
Helpful
Report abuse

Timothy P. Young
5.0 out of 5 stars Downright Hilarious
Reviewed in the United States on August 24, 2010
Verified Purchase
The premise is simple--find a movie and make fun of it with a commentary track. It's harder than it sounds, I'm sure, but Mike Nelson and company do an outstanding job of taking down one of my personal favorite cult films, "Night of the Living Dead."

The fun starts early, with jibes not only aimed at the actors onscreen, but 'technical' aspects of a shot (which serves the dual purpose of making fun of commentary tracks in general). It continues throughout the film, at various levels of inspiration, from silly sex jokes to esoteric references to wry, shrewd observations. And since the film was shot around Pittsburgh, there are several references to the Pittsburgh Steelers, just to keep us on our toes.

I'm sure my neighbors must think I'm crazy, because I sat on the sofa laughing hysterically for at least half of the 96 minute runtime. Hilarious. I mean that.

Also, as a 'bonus,' you can watch the film without the RiffTrax commentary. For someone as into cult film as I am, this really is a true bonus...I can watch it for the original zombie suspense, or for big, big yuks.

Arthur DaigleTop Contributor: Gardening
5.0 out of 5 stars Fun with zombies!
Reviewed in the United States on November 15, 2018
Verified Purchase
Rifftrax does great work with terrible movies, and this is proof they do just as well with good movies. I'm not a fan of the zombie genre, so it was doubly entertaining to see the guys make fun of it. The jokes were hilarious as always and helped make a scary movie laughable.
Read more
Helpful
Report abuse

swanzilla
5.0 out of 5 stars Great Item for the Price ...
Reviewed in the United States on May 7, 2018
Verified Purchase
What can you say must all Rifftrax are Great !!!
Not really a fan of Night of the living dead bought this for the Riffs
and I'm very happy with it ..... Funny Funny Funny
Read more
Helpful
Report abuse

Gypsy McGreevy
5.0 out of 5 stars Riffing of the Living Dead
Reviewed in the United States on July 31, 2020
Verified Purchase
One of my favorite movies destroyed by my favorite guys. Worth every penny.
Read more
Helpful
Report abuse

bruce carlen
5.0 out of 5 stars they're coming to get you Barbara
Reviewed in the United States on January 2, 2021
Verified Purchase
Making the worst watchable
Read more
Helpful
Report abuse

Ken j knapp
5.0 out of 5 stars Love these guys
Reviewed in the United States on February 24, 2020
Verified Purchase
Wish they where on blueray
Read more
Helpful
Report abuse

The Goog
5.0 out of 5 stars Excellent!
Reviewed in the United States on October 21, 2014
Verified Purchase
If you love zombies and your a fan of "Mystery Science Theater 3000" then you must have this! The commentary is hilarious and of course the movie is great.

I would gladly recommend this to a friend.
Read more
Helpful
Report abuse
See all reviews