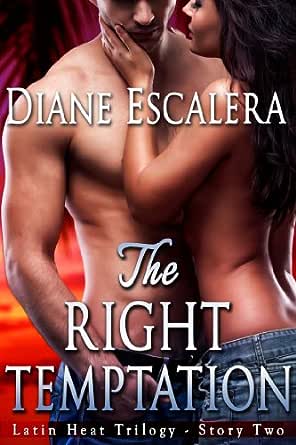 You've subscribed to Latin Heat Trilogy! We will preorder your items within 24 hours of when they become available. When new books are released, we'll charge your default payment method for the lowest price available during the pre-order period.
Update your device or payment method, cancel individual pre-orders or your subscription at
Your Memberships & Subscriptions
There was an error. We were unable to process your subscription due to an error. Please refresh and try again. 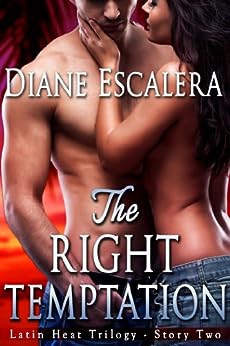 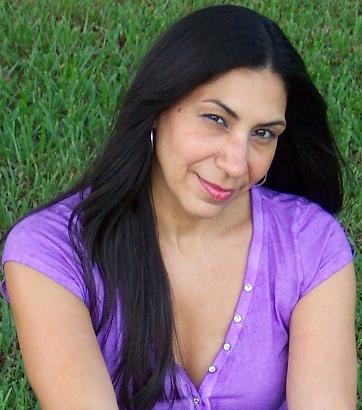 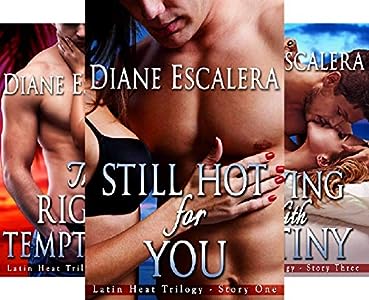 Escalera has a great voice for contemporary romance. It's fun and flirty, sweeping you up in a romance that is thrilling and passionate.
- Under the Covers Book Blog

Once again Diane Escalera delivers a heartwarming and sexy read. The Right Temptation is an abundance of smoldering romance, chemistry and one seriously hot hero!
-Lounging With Books

The Right Temptation is the second novella in my Latin Heat Trilogy, a titillating collection featuring the hunky LaCosta men. Each story can stand alone, but you'll want to read more and see how these guys do it. Sensual Tales. Passionate heroes. Laugh-out-loud humor! *The Right Temptation was previously published by Lyrical Press, July 2013. Same tantalizing story. Hot new cover!

Debbie
5.0 out of 5 stars Caliente!
Reviewed in the United States on July 10, 2013
Verified Purchase
Loved this hot and sexy novella! Diane has the ability through her writing to keep you so into this story that you don't wanna put the book down until you're done reading it. Can't wait to read her next story!!
Read more
Helpful
Comment Report abuse

Diana (@Offbeat Vagabond)
4.0 out of 5 stars Not enough cold showers in the world will cool you down after this. Super sexy.
Reviewed in the United States on August 17, 2013
The Right Temptation is one hell of a spicy novella. We follow a young woman named Kayla. She is a hardworking nurse at one of the best hospitals in Florida. One day while working, an old friend and the man of her dreams, comes in from an accident. She knows this is a sign that she must try to be with him. She missed her chance before and she won't let him slip away again. She has some big plans in store for him.

Oh my goodness! It is hot enough here in Florida, this book made it worse. But at least I was happy with this kind of heat. This was a great little read. Kayla was a great leading lady. She had me laughing so hard. I won't lie, you would have thought she was borderline stalker if you didn't know her. I loved her go-getter spirit and personality. She wasn't afraid of trying to get what she wanted. Nico was sexy as hell. You can tell he was afraid of giving up his bachelorhood. I wanted to smack some sense into and I am sure Kayla would have. That girl has some fire for sure.

I loved the heat between these two. My goodness, it is was explosive. I loved that they already have a past. Kayla's brother, Jesse, didn't want Nico anywhere near her and Nico is still best friends with him. He needs to really figure out himself before he moves forward. I love how Escalera built on this. It felt like a real story. I loved this.

This is a great novella. It was short and super sexy. I wish I could have a weekend like this. Hell, that is what the book should have been called, One Weekend. I would love to read more books by Escalera. This is definitely worth checking out, just make sure you do it alone.

Review: Since the age of 13, no guy has ever measured up to Kayla's idea of caliente like Nico La Costa. It's hard to believe that she has held a candle for him practically her whole life. Well, who could blame her, right? Still, stalking the guy might be a little too extreme.

There was no denying the instant physical attraction between the two right from the start; however, Nico was not seeking the complication of a relationship. He had to "[think] with the right head." (13) The best part was when he tried to distract himself with an Xbox game until she came out in her skimpy outfit. Suddenly, it became a question of: what game?

Told in the witty banter of Kayla and Nico, this story is a teeter-totter of lust and desire with very little resistance. There must something to the old adage: "Latin men had a reputation for being good lovers." (23) I definitely agreed with Kayla about tattoos: "She didn't mind a well-placed tattoo, but some men took it to the extreme. Not Nico." (50)

The whole thing seemed to take place in one sultry, provocative weekend as snippets of their shared history filtered through. One thing was clear: Kayla was determined to hook him--hook him in the saddle, hook him for life. My goodness!

Of course, after their climactic evening, who ends up showing up? His mamá! Oh, snap!

The writing was decent, but the story did not go beyond the wild passion, which consumed the entire length of the novel. A quick read for romance lovers.
Read more
Helpful
Comment Report abuse

Lindsey Hutchison
4.0 out of 5 stars Bring on the Latin Heat ~ United By Books
Reviewed in the United States on April 19, 2014
Kayla has always had a thing for her older brother’s friend Nico, even before the kiss when she was a teenage girl. The kiss just spurred this feisty minx on to bide her time and wait for the right moment to make her move. Also, her brother had her on lockdown where his friends were concerned. All of his friends we're told his sisters were off limits. Now older and still remembering that kiss, Kayla gets a golden opportunity after helping nurse Nico when he was brought into her hospital.

Nico was about to get some home nursing and he didn't know it. Though once Kayla springs out of nowhere on his doorstep, who is he to say no to catching up with an old, but very beautiful, off limits friend? He's not the relationship kind of guy at the moment and he knows she is looking for one. Though if he thought she would make it easy, he was in for a surprise.

I liked this book. It was an enjoyable, short read. I could totally relate to Kayla since my brother was the same to me where his friends were concerned. Now that I think of it, he still is that way. Kayla is feisty and lovable at the same time. Plus I like the fact that she wasn't afraid to go after what she wanted. The only thing that irked me a wee bit was she kept commenting on Nico’s hot looks. I got that after the first few times.

Oh and Nico was just my kind of Latin guy. I like a Latin lover as much as the next girl. Passionate, possessive, with a side of sweetness. I liked how Kayla managed to turn his world upside down. The right woman will make you realize you may not have thought you needed something, but you do now. The banter between them flowed and I still got my HEA. I felt the connection between them. The fact that they knew each other previously made this book work since it’s a short read. All in all, a good, entertaining, romantic read.