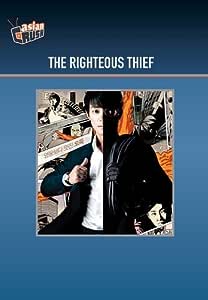 $9.99
& FREE Shipping on eligible orders. Details
Sold by: Amazon.com
Have one to sell?
Sell on Amazon

During the day, Moo-hyuk is just a mild mannered music teacher. However, he is in fact the 18th generation descendant of legendary thief Hong Gil-dong, and under the guidance of their parents, he and his younger brother, Chan-hyuk, lead secret lives stealing from the corrupt and rich using a mixture of skills and hi-tech gadgetry. However, Moo-hyuk may have bitten off more than he can chew when he takes on the villainous businessman Lee Jung-min, a vicious man whose cunning schemes rival the resourcefulness of the thieving brothers. Complicating matters is Moo-hyuk love life, as he falls in love with Yeon-hwa, the little sister of the prosecutor who is trying to reveal his families secret past.

3.9 out of 5 stars
3.9 out of 5
55 global ratings
How are ratings calculated?
To calculate the overall star rating and percentage breakdown by star, we don’t use a simple average. Instead, our system considers things like how recent a review is and if the reviewer bought the item on Amazon. It also analyzes reviews to verify trustworthiness.

grace
5.0 out of 5 stars but it was very funny and entertaining
Reviewed in the United States on November 17, 2015
Verified Purchase
The original Legend of Hong Gil Dong was written in the 1600 during the Chosen Dynasty by Huh Gyun. He was the illegitimate son of a nobleman and his mother was not of nobility. When the movie starts it states that Hong Gil Dong was not able to call his father, "Father" nor address his siblings accordingly, that was the custom of that time. That was the life of the writer Huh Gyun, a second class, half nobility. There have been many Legend of Hong Gil Dong movies and dramas in the original historical settings. This one of course is not, but it was very funny and entertaining.
Read more
One person found this helpful
Helpful
Report abuse

B. Lee
3.0 out of 5 stars Good for a hot afternoon
Reviewed in the United States on July 18, 2015
Verified Purchase
I consider the quality as an afternoon movie martini. Namely, an acceptable movie with a decent story line and reasonable characters to pass away a hot afternoon. There were a number of light hearted moments involving the main character, his girl friend and his brother. The action scenes were reasonable, not too over the top, nor rudimentary. Not a movie that I would see multiple times.
Read more
Helpful
Report abuse

HR Hamada
4.0 out of 5 stars Modern Day Korean Robin Hood
Reviewed in the United States on May 5, 2016
Verified Purchase
Fun Robin Hood story. The real stand out, is the "villain" who, alone is so fun that it makes an otherwise mediocre move lots of fun. Pretty good camera work and art direction
Read more
Helpful
Report abuse

ky
4.0 out of 5 stars Family kind of like Robin Hood
Reviewed in the United States on March 16, 2015
Verified Purchase
This is an action film not a comedy. However, it isn't like a typical American action film with tons of violence. This was about a family trying to be the Korean version of Robin Hood.
Read more
Helpful
Report abuse

Kindle Customer
4.0 out of 5 stars Give it a try
Reviewed in the United States on October 20, 2016
Verified Purchase
I enjoyed this movie, and I think if you love Korean comedy movies this is a great one to watch.
Read more
Helpful
Report abuse

Amazon Customer
5.0 out of 5 stars Wow. Great story and a whole lot more...
Reviewed in the United States on April 23, 2015
Verified Purchase
I don't want to spoil it for you but I will tell you that if you like James Bond movies then this is for you.