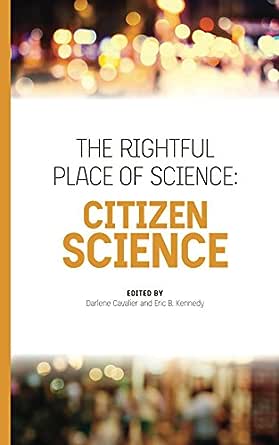 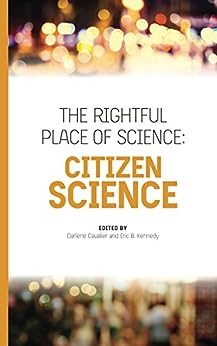 Do you look at the world around you and try to figure out what's going on? Do you like to think? You can do citizen science. Start with this book. --Bill Nye the Science Guy --This text refers to the paperback edition.

Bart Leahy
4.0 out of 5 stars What is Citizen Science and Why Should it Matter to You?
Reviewed in the United States on June 19, 2016
Verified Purchase
I'm reviewing The Rightful Place of Science: Citizen Science for a few reasons: first, I've worked with three of the authors, second: I'm interested in the topic; and third: I believe that the field provides multiple opportunities for technical writers to communicate about science and to participate in scientific endeavors without the need to obtain a scientific degree. Citizen Science introduces the reader to the topic through several perspectives and explains the various ways it can be important to how science is or could be conducted. It's worth your time!

What is "citizen science" and why should we care?

Citizen science can be defined as laypersons (as opposed to technically trained professionals) conducting various parts of a scientific experiment or study, from collecting data to analyzing it to even helping set the agenda for which scientific questions should be investigated.

Prior to the 19th century, most of science ("natural philosophy") was performed by dedicated amateurs; then came the creation of a "science establishment" with laboratories, funding organizations, official degrees and titles, and universities. By the middle of the 20th century, World War II had centralized funding of science and technology projects within the government, with exemplars like the atomic bomb and the space program. The problem with these "Big Science" programs and institutions is that they set up scientists as some sort of secret cabal or even priesthood, where only those who knew the mysteries being allowed to participate. This distance between professional scientists, engineers, and the vast majority of the population has created gaps in understanding, access, and policy engagement, which is problematic given how much of our daily lives is affected by science and technology.

The book itself addresses a variety of topics related to citizen science, including the editor Darlene Cavalier's path to becoming a citizen scientist; the impacts of citizen science on science policy; the educational opportunities in the field; how the field is reported on in the media and how practitioners communicate among themselves; how citizen science can be tied to a social or political movement; how it can be used to engage young people and introduce them to new fields of study; and how it can impact the relationships laypersons have with the scientific community and our government, which funds most of the science in this country.

As one example of the ambition of the authors, consider this ambitious call to arms: "Citizen science is about much more than just the scientific process itself--it's a fundamental reorienting of power relations among citizens, government, and society as a whole." They're looking to change the world for the better.

If that sounds like a lot to cover, it is. What's even more impressive is that the writers/editors address all of these topics within a tidy 133 pages. I read it in the space of a single afternoon. It's worth doing.

Michael Bear
5.0 out of 5 stars Excellent Introduction to Citizen Science
Reviewed in the United States on July 19, 2016
Verified Purchase
An excellent overview of the goals and impact of citizen science.
Read more
One person found this helpful
Helpful
Comment Report abuse

David T Lang
5.0 out of 5 stars Everything you need to get up to speed
Reviewed in the United States on September 1, 2016
Five stars. This book does something difficult: it succeeds in appealing to both newbie and expert. If you've ever heard of citizen science, this gives an excellent introduction and crash course. If you're a citizen science veteran, this book pushes your limits and adds valuable insight.

The field is growing and changing so much. It's hard to stay on top of all the latest research. This book cuts right to the important stuff. My one request: get this capable group back together to write an updated version in two years.
Read more
One person found this helpful
Helpful
Comment Report abuse
See all reviews from the United States

FutureGirl
5.0 out of 5 stars Very useful
Reviewed in the United Kingdom on August 22, 2016
Verified Purchase
This is a very good book. Compact in size and easy to read. It felt slightly too introductory at first but, actually, it contains a lot of useful and pertinent insights. It may look like a popular science item, but I think it would be useful both for casual readers /hobbyists - and for students / academic researchers. Really glad I bought it.
Read more
Helpful
Sending feedback...
Thank you for your feedback.
Sorry, we failed to record your vote. Please try again
Report abuse