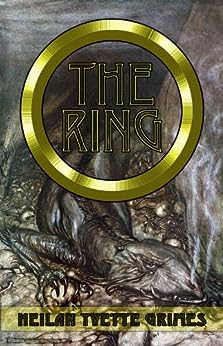 The Ring: The Legend of the Niebelungenlied: The Volsungr Saga and The Saga of Ragnar Lodbrokr Kindle Edition

New releases
Explore popular titles in every genre and find something you love. See more
Amazon Business: Make the most of your Amazon Business account with exclusive tools and savings. Login now

Heilan Yvette Grimes has been a writer, editor, graphic/web designer and photographer. She has taught Graphic Design, Web Design, Web Media, Typography, and Aesthetics and Critical Studies of Graphic Design at various Universities. She developed an interest in Norse Mythology and Sagas when she was a young child. She created facebook.com/thenorsemyths to explore the norse myths and scandinavian sagas. --This text refers to the paperback edition.

Christopher A. Fulkerson
3.0 out of 5 stars The Sexes Are BACKWARDS in the Genealogy
Reviewed in the United States on July 10, 2012
This is not a review of the book, which I have not read and about which I therefore cannot comment. However, knowing the possibilities I am about to sketch in brief, if you read this book, it may be well not to allow your mind to be available for certain incorrect assumptions that just might also have crept into the text. In situations like this I give three stars to a book because some attribute is required; three seems to me to be neutral... until I read the translation, which is not on my reading list.

This memo is only to alert potential readers to the fact that the genealogies in the back of the book all have the wrong sexual attributions. It is altogether implausible that the book adequately explains such a thing, so either there is a mistake, or there is a conspiracy. I will briefly chart both possibilities, beginning with the conspiracy.

Unfortunately, the plain simple mistake might not be all that is going on. There is a backstory within this and other literature for this kind of "error." Either the compiler simply doesn't know that the symbol for male is the circle with the arrow, symbolizing the erect phallus, and the symbol for female is the circle with a handle, symbolizing the mirror women use to adorn themselves, or there is here a continuation of the sexual reversal that occurs in at least one well-known extension of this literature.

In J.R.R. Tolkien's Lord of the Rings cycle, the "Rings of Power" are given to beings all of the reverse gender as those of the Norse myths, and in the exact numbers Richard Wagner uses in his operatic tetrology Der Ring des Nibelung, from which Tolkien purloins, shall we say, wholesale: Wagner's Nine Valkyries and Three Norns become Tolkien's Nine Kings and Three Elf Lords. Hobbits are "short, pudgy in the stomach, barefoot and like to eat five times a day:" read: "barefoot and pregnant women with the craves." The clues are pretty broad and you have to be thick to remain in denial about them. If the feminine details of many of the supposed male beings in Tolkien's Ring are not enough, this whole bizarre possibility is, to director Peter Jackson's credit, brought to the fore in his Tolkien films, where Gimli, played by John Rhys-Davies, holds forth at one point about how dwarf men and dwarf women can scarcely be told one from the other. Legolas laughs and says "It's the beard;" meaning, that's how they tell themselves apart. And then you realize Gimli's beard does in fact have a strangely ornate, perhaps feminine style to its braids. The first time I saw the series with a church choir I was at the time leading, one of the women in the choir, an agreeable person but not known for the depth of her literary insight, took one look at the elves marching in to help "with men" at the Battle of Helm's Deep, and said to me "They're women!" One ordinary person's observation can be worth 500 dissertations. So this whole damned switcheroo is one that the intellectually unpresupposing can understand at a glance; or understand quickly from a cliche about barefoot pregnant women; or, with a little more information, from a comparison with Wagner's more faithful iconography... again, if you want to reject that Tolkien has a sex-reversal agenda, you are probably just in denial. And oh there's the bit about Tolkien's Ring taking place in a world where the sun is female and the moon is male... Tolkien's is definitely a Ring in "a different light." Legolas is... Lego Lass.

This is far from the only and certainly not the most cryptic example of this sort of thing. "Heilan Yvette Grimes" in his or her translation only commits a crude blunder in trying to encipher the sexes backward using the wrong icons. There are efforts employing much greater finesse. As just one other example, the New Strong's Exhaustive Concordance of the Bible (Page 5 of the Concise Dictionary of the Words of the Hebrew Bible, at the back of the book) presents a version of the names of the Hebrew letters which, when spelled out in full - say, Kaph, Yowd, Nuwn, Giymel - allows for an additive code in which the word "King" equals in numerical value the word "Queen." Communications employing this code can say "King" and mean the baldface lie, "Queen." So right up to the highest level of human sexual archetypes, and involving the holiest book in the West, sex reversals are attempted. The Chinese policeman in the 1983 film series "Reilly, Ace of Spies" was correct: certain people have a fondness for using the Bible for ornate cryptic conspiracies. So it may be that the present example is part of this kind of effort. No wonder our civilization is turning degenerate: the subliminal campaign to knock the very crowns of identity off our heads is being presented in some very carefully worked-out campaigns.

I for one don't think it is too much to call the Tolkien agenda a conspiracy, and when I found the sex-reversal bit going on here in "Heilan Grimes's" translation in plain sight (the pseudonym is redolent of a composer with a homosexual agenda, Benjamin Britten, whose most successful opera is "Peter Grimes"), I decided there is a chance that what some might suppose a mere "mistake" is part of some kind of cult that can be pointed to within these domains of literature. That is to say, this agenda does exist in other literatures; I am only discussing it within these particular areas, the Biblical example to support the general acusation of conspiracy, because they are consistent, because they manipulate the proper outcomes of existing works, because these example are iconographically and/or arithmetically provable in open court, and because being part of age-old tradition there is little chance the "error" is on both sides. The Tolkien is wrong, and meant to be a slap in the face of all Teutonic iconography; the Strong's version of the names of the Hebrew letters is similarly malicious.

The compiler, presumably the translator, says that Brynhildr is male and Gunnar is female; that Sigurd Fafnisbani is female and Gudrunr is male; that Sigmundr is female and Svanhildr is male; and confirms Brynhildr as male paired with Sigurdr Fafnisbani confirmed as female. In short, every gender attribution in the back of the book is wrong, wrong, wrong. Whether you want to remain on the alert for deliberate sex-reversal manipulations in this or other literature, that much is a fact.
Read more
One person found this helpful
Helpful
Report abuse
See all reviews

april
5.0 out of 5 stars informative
Reviewed in the United Kingdom on July 18, 2020
Verified Purchase
scholarly...interesting...
Read more
Report abuse
See all reviews
Back to top
Get to Know Us
Make Money with Us
Amazon Payment Products
Let Us Help You
EnglishChoose a language for shopping. United StatesChoose a country/region for shopping.
© 1996-2021, Amazon.com, Inc. or its affiliates