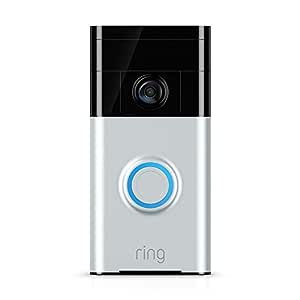 Save and share video and photos with an optional Ring Protect Plan (subscription sold separately).

Answer the door from anywhere

Stay connected to home with motion-activated alerts, HD video and two-way talk from Ring Video Doorbell. Get alerts on your phone, tablet and PC when anyone comes to your door, so you can see, hear and speak to visitors from anywhere.

Watch over your home in wide-angle 720HD video, and protect your property around the clock with infrared night vision.

Get alerts on your phone, tablet and PC when anyone presses your Doorbell or triggers the built-in motion sensors.

Hear and speak to people at your door from your mobile device with Ring’s built-in microphone and speakers.

Check-in on your property with a press of a button, and use Live View to get on-demand video and audio any time.

Easy installation
Comes with all the tools you need to install and set up your Doorbell in just minutes.

Adjustable motion detection
Adjust the sensitivity of your motion sensors to find the ideal setting for your home.

One simple app
Link all your Ring devices to the Ring app and control your entire home security from one easy-to-use dashboard.

Get even more out of all your Ring doorbells and cameras with Ring Protect, a comprehensive service that lets you review what you missed. See, save, and share videos and photos when you activate video recording and photo capture for $3/month per device or $10/month per household.

With Control Center, you can add and remove authorized client devices, shared users, and select linked accounts–all from one place on your phone, tablet, or PC. Learn more about security and privacy.

Link your Ring account to Alexa for hands-free home monitoring so you'll always know when someone's there. Hear announcements on your Echo devices when your doorbell is pressed, and automatically see a live view of your camera on Echo devices with a screen. Talk to visitors through compatible Echo devices, like Echo Dot or Echo Show, by simply saying “Alexa, talk to the front door.”

4.4 out of 5 stars
4.4 out of 5
79,680 global ratings
How are ratings calculated?
To calculate the overall star rating and percentage breakdown by star, we don’t use a simple average. Instead, our system considers things like how recent a review is and if the reviewer bought the item on Amazon. It also analyzes reviews to verify trustworthiness.

liyipui123
1.0 out of 5 stars ALERT! Anybody can steal your doorbell and walk away!
Reviewed in the United States on March 29, 2019
Color: Satin NickelConfiguration: DoorbellVerified Purchase
Here’s what happened in my house yesterday. Some thief stole my Ring Doorbell and did a factory reset, then put it under their account and deleted all the historical videos from there, obviously including their footprint caught by Ring.
The whole process is so easy that it doesn’t require any permission from my end. The only notification I got was an email saying, “Your Ring Device Has Changed Ownership”, after the device has been transferred to their account and I already lost access to it.
I’ve had Ring Doorbell and Ring stickup camera for over a year with their Protect Plus Plan which stated, “Your Ring videos are stored in the cloud for up to 60 days (in the USA).” However, Ring Support Team told me the videos are gone and they couldn’t recover it. They do offer free replacement on stolen device, which I appreciated, but now I’m seriously concerned with the functionality of this product.
1. As a security product, why Ring allows factory reset and change of ownership without account holder’s permission? If there’s a permission requirement sent to me (like most security system do nowadays), then I will have opportunity to deny it before they can delete the videos.
2. Since I paid the Protect Plus Plan under my account, I would assume the videos stored in the cloud are associated to my account not with the device. Even if they can delete the video locally stored on the device, why they can delete those stored in the cloud, which supposedly been protected under my account?
The logic behind security products like Ring is that you pay for emergency situations like this. If the system only works when nothing happened but failed when thief coming, I don’t think anybody should waste their money.
Read more

Doug Colt
1.0 out of 5 stars Astoundingly disappointing on multiple levels
Reviewed in the United States on December 27, 2017
Color: Satin NickelConfiguration: DoorbellVerified Purchase
I am really at a loss to express how disappointing this product was.

To start off, I am extremely tech-savvy and my home is wired with a good 40+ z-wave, Insteon, Hue, and Zigbee devices. I also have extensive experience in electrical engineering.

Right off the bat, the first Ring doorbell I received would not charge via hardwire. This was a brand-new installation with a new transformer, new resistor, and all voltages confirmed with a volt meter. I spent a good 45 minutes waiting on the phone with Ring tech support to get the inevitable conclusion that this was a defective unit. But instead of just swapping it out right there on the phone, they first wanted me to send back the mounting plate, wait for a new one to be shipped, try the new mounting plate, call back if there was a problem, and THEN they would ship out a new unit. That was very disappointing customer service from the beginning.

Luckily, Amazon came to the rescue and shipped out a brand new unit overnight to replace the defective Ring unit.

One would think this would solve the problem but alas, no. TWO DEFECTIVE UNITS IN A ROW that would not charge via hard wire. Thinking that there was some freak problem with the transformer, I borrowed a friend's Ring doorbell. Boom--charged right away. So yes, I ended up with two bum units in a row. That should never happen.

Setting aside the double hardware failure, a few other major gripes:

1) The Android software for this is absolutely awful. It is incredibly slow, buggy, and crashes frequently. And good luck trying to use the "Live View" feature. It takes at least 30 seconds to connect to the doorbell and again, crashes the app the majority of the time. The frustration level is just off the charts and I cannot believe the app ever made it out of beta.

2) The Ring does not play well with two or more devices. I have an iPad permanently mounted in my living room for all types of home automation, including the Ring app. The Ring app is always open in the background obviously. Apparently if you have one Ring app opened somewhere and you then try to open it on another device (such as my phone when I'm out of the house)--crash. How is this possible?

3) This is just personal, but the actual doorbell sound on this thing is really jarring and there's no way to change it to anything else. That should be a basic feature.

This looked like such a wonderful product on the surface but was an utter disappointment. I'll be returning the second defective unit.
Read more
4,266 people found this helpful
Helpful
Report abuse

Love From The Oven
1.0 out of 5 stars When put to the test, it failed at every measure and was stolen in under a minute.
Reviewed in the United States on May 14, 2017
Color: Satin NickelConfiguration: Doorbell
Writing this review the morning after it took someone about 20 seconds to disable and steal our Ring Doorbell. Camera triggered too late to get a look at the person stealing it, speaker feature hung up and didn't activate (like usual) and it was gone from my house in a shockingly short amount of time.

Prior to today,I've always been a bit disappointed at the delay in the motion sensor in triggering the camera. I get quite a few packages weekly, and 90% of the time the camera doesn't activate until someone is walking away from the door. Sure enough, last night, it did not activate until the moment someone was putting their hand over the camera. When my husband tried to speak over it the app, as usual, it delayed and did not activate when it should have. Within 20 seconds the camera went dead. Doorbell gone, hole in my wall as well as feelings of security. When put to the test, it failed at every measure. Camera did not trigger in time to get any view of the person at my door, ability to speak through it didn't work (on an iPhone 7 - current phone, updated), and it was gone from my house in less than a minute. So basically my Ring Doorbell let's me know when a car drives down the street, but when I need it to do what I bought it to do, it fails.
Read more

James
2.0 out of 5 stars good to go right
Reviewed in the United States on June 13, 2016
Color: Satin NickelConfiguration: DoorbellVerified Purchase
So got my doorbell and had it hardwired...good to go right? Well, a few months later the motion sensor and the live view
stopped working. So I called Tech Support and found out that even with hard-wiring, the battery will run out of gas and need to be recharged. This requires removing the unit and jacking in the battery with a USB cord.

Nowhere on the APP is there a indicator that shows that the battery is getting low! So we could be traveling in vacation and all of a sudden without any warning the ring doesn't work!! Imagine that?

Checked the box and couldn't find any mention of this important safety non-feature of the doorbell. I like the product but am extremely disappointed in the fact that it can stop working at anytime without pre-warning.
Read more