Rings of Passage: A Time Travel Novel with Richard III and millions of other books are available for Amazon Kindle. Learn more 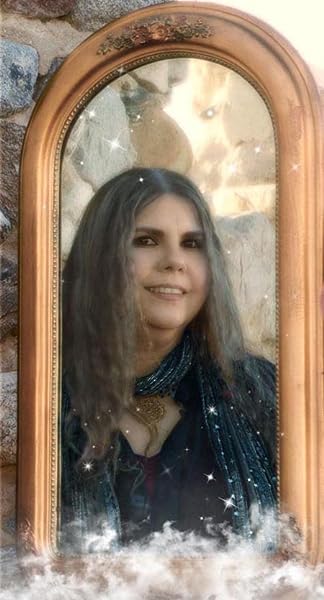 Karla Tipton cut her literary teeth on gothic romances, Edgar Allan Poe and the vampire soap “Dark Shadows.” Long before there were sparkly vampires roaming through the cultural consciousness, she wrote about ordinary women time traveling through history and falling in love with powerful men of myth and magic. “Genre-bending” came naturally. Despite publishing industry advice to find a genre and stick with it, Karla shamelessly mixed it up, blending history, paranormal, time travel, fantasy and mystery into her novels. When she became fascinated with Richard III, she made a research trip to England, so she could lend authenticity and historical detail to her novel about a romance between a modern woman and her favorite medieval king. “Rings of Passage,” a time travel romance set in medieval England, is Karla’s first published novel. Karla is a member of Romance Writers of America, and her writing has earned top honors in several RWA chapter competitions. When not at her government job or writing novels, Karla plays guitar in a classic rock band.
Start reading Rings of Passage: A Time Travel Novel with Richard III on your Kindle in under a minute.

4.0 out of 5 stars
4 out of 5
136 global ratings
How are ratings calculated?
To calculate the overall star rating and percentage breakdown by star, we don’t use a simple average. Instead, our system considers things like how recent a review is and if the reviewer bought the item on Amazon. It also analyzes reviews to verify trustworthiness.
Top reviews

Lady Anne
4.0 out of 5 stars Mediaevil Paranormal RRomance **(4/5 STARS)
Reviewed in the United States on September 15, 2017
Verified Purchase
This is one of those books that once I started it I kept reading it until it was finished. It’s a historical fantasy where Richard is plunged into the political turmoil of the Plantagents and Tudors. This is a well written novel with a blend of real and fictitious characters caught in a multifarious mix of political intrigue, romance and “magic”. Instead of portraying Richard as the evil, hunchback and possible sexual degenerate she offers an alternate view that makes readers wonder if history was unfairly biased by Tudor views about this last Plantagenet king.

4/5 STARS: **I want to thank the author and/or publisher for providing me with a copy of this book via NetGalley in exchange for an honest review; all opinions are mine.**
Read more
Helpful
Report abuse

Nick Name
4.0 out of 5 stars Fascinating mediaeval paranormal romance
Reviewed in the United States on June 8, 2015
Verified Purchase
Kudos to Cara Bristol for her review. As she said, the protagonist was "plunged into political machinations between the Plantagenets and the Tudors. It is a finely-drawn historical novel involving a mix of real and fictitious characters caught in a complex plot of political intrigue, tender romance and magic." Karla Tipton did fantastically well for a debut novel: it was well-researched with a complicated plot but she balanced weaving the historical detail into fiction so this never reads like a history lesson of the War of the Roses. As Cara said, Karla "skillfully blended the genres of history, time travel, romance and fantasy." I especially enjoyed the added paranormal interpretation - wizardry, the rings, the equally fascinating Morton.

Richard III was popularly depicted as a crippled hunchback (through scoliosis I believe) as well as a tyrant whose behaviour and greed for the title of King lead to the doom of his nephews, the Princes in the Tower. Karla however offers an alternate portrayal of Richard III as a sensitive, caring, grieving brother and uncle, who also laments the loss of his beloved wife as well as his brother who was his best friend. His evil reputation and poor appearance are re-evaluated and you actually sympathise with the last Plantagenet. We all know that Henry VII did reign and his son, Henry VIII made decisions so far-reaching that their effects are felt today, especially with tax and ecclesiastical laws, that you begin to hope that Richard III does succeed! Then you wonder what else will change though? Is this good or bad? And so the intrigue continues.

************Possible mild spoiler alert************
I guessed the ending, or rather I should say it was the only ending I was happy with, and I hoped Karla would write it as she did, as the romantic side "had" to win. I kept wondering if Richard dies or survives? If so, how does he cope without being King? For this reason I was glad Karla did not go into more detail at the end, as I wouldn't like to see Richard's frustration, living without being King, in a different space.

It was thoroughly enjoyable and I put a whole Saturday aside to read this wonderful story in one go.
Read more
One person found this helpful
Helpful
Report abuse

Amazon Customer
5.0 out of 5 stars Very nice
Reviewed in the United States on June 10, 2015
Verified Purchase
Very nice story! Loved the magical element, Tipton mixes history and fantasy with surprising expertise and poise managing to keep the story flowing and interesting. Men like Caesar, Caligula, Nero, Napoleon and Richard III are often portrayed in later history as irredeemable villains, power hungry individuals with nothing to recommend them for while their often significant accomplishments and reforms are blithely ignored or attributed to others. As one of the characters notes , history is often written by the winners to suit their ideological purposes, Ms. Tipton happily breaks the stereotype surrounding this fascinating monarch so much so that she inspired me to learn more about him.
Read more
3 people found this helpful
Helpful
Report abuse

Kindle Customer - Carole Lehr Johnson
3.0 out of 5 stars Not a clean read
Reviewed in the United States on December 12, 2020
Verified Purchase
This was an okay historical fiction read. I was enjoying it fairly well when approximately halfway through, there was an explicit, intimate scene. I struggled to the end with two more—although shorter—of these scenes. Would have considered reading more from this author until I discovered this was not a clean read.

I give it a 3 star rating because the story itself was interesting.
Read more
Helpful
Report abuse

Juliana Howell
5.0 out of 5 stars Really great
Reviewed in the United States on June 10, 2015
Verified Purchase
I really liked this I haven't read Shakespeare's 'Tragedy of King Richard III' but I do know the history of the War of the Roses as well as medieval technologies and this book kept true to the times Anise found herself. Anise is a strong character and Richard is given a great background that's still true to history but gives a different insight to him. They make a great couple. I only wish they could go back and let his mother and friend know that he is well and that his friend took her advice and stayed out of the cellar. I wish I could see her mother's face when she sees her daughter now especially with her memories back and her newfound confidence. I look forward to a sequel.
Read more
2 people found this helpful
Helpful
Report abuse

B. McKee
5.0 out of 5 stars Good time travel romance
Reviewed in the United States on June 5, 2015
Verified Purchase
I found nothing to dislike about this historical time-travel paranormal medieval romance. Perhaps it tried to cover too many genres, but hey, if you're writing fiction, go for the whole enchilada. In any event, this author made it work and ended up with an interesting adventure story.

Although the premise of the plot was beyond the realm of possibility, she had her historical facts down pat. So it was like a bonus history lesson about the life and times of King Richard III, a historical figure we've all had questions about.

If you enjoy time travel romance and don't mind having a wizard or two thrown in, give "Rings of Passage" a try.
Read more
2 people found this helpful
Helpful
Report abuse

Love2Read
4.0 out of 5 stars Good story; easy read.
Reviewed in the United States on August 15, 2015
Verified Purchase
This was a very fun story to read. It was a bit confusing at first because it blended time travel with fantasy with history. There were parts that were a bit difficult to piece together with the wizard and the rings but the rest of the story was enjoyable and easy enough to follow. As with any time travel story, it can be a bit far-fetched but that is why I enjoy them. It takes me away from the reality of life.

You'll probably enjoy this story if you like historical romance and time travel. Even though there is romance in the story it isn't too explicit and the author doesn't describe every single detail, which was nice.

It is certainly not a perfect book. The Middle English dialogue is, at times, unconvincing and stilted. Some of the material, particularly the fantasy elements, is almost puerile. I would also say it's a little long and could do with a few cuts.

But the concept is fine. It's a completely new and novel take on Richard III, and Miss Tipton carries it off rather well on the whole. If you are looking for undemanding, escapist fiction then by all means do try this.
Read more
Report abuse

AnnieCampbellAuthor
4.0 out of 5 stars A good read
Reviewed in the United Kingdom on September 16, 2016
Verified Purchase
A little different to your average time travel book, for a start one of the main characters is Richard 111. As it has to remain true to historic events the fiction has to marry into the facts as we know them this is done really well. Along with a side story involving magic rings sorcery and an ethereal dastardly wizard. I really enjoyed this read and would thoroughly recommend it
Read more
Report abuse

Mrs. Christine A. Edwards
5.0 out of 5 stars A great Richard fantasy.
Reviewed in the United Kingdom on October 12, 2014
Verified Purchase
Fascinating. A very enjoyable read and an unexpected twist at the end. Hope she develops the story and takes it further. Highly recommend.
Read more
5 people found this helpful
Report abuse

Jo
4.0 out of 5 stars Fast moving and fun
Reviewed in the United Kingdom on January 12, 2015
Verified Purchase
A fast moving romp through time to the Middle ages with a feisty heroine and attractive hero! Great fun
Read more
One person found this helpful
Report abuse
See all reviews
Back to top
Get to Know Us
Make Money with Us
Amazon Payment Products
Let Us Help You
EnglishChoose a language for shopping. United StatesChoose a country/region for shopping.
© 1996-2021, Amazon.com, Inc. or its affiliates